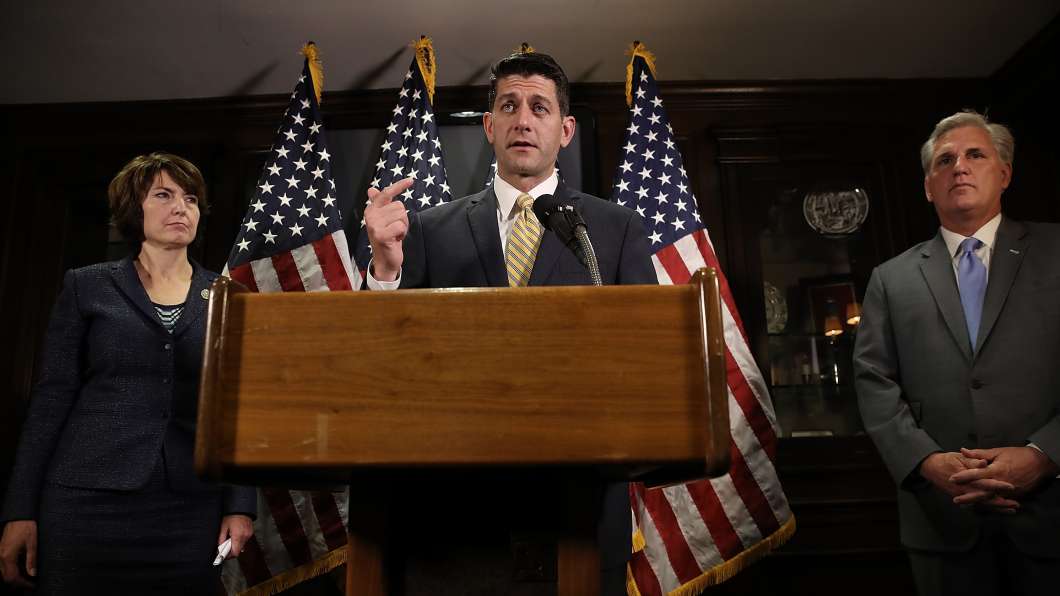 President Trump and GOP congressional leaders outline their plan to overhaul the federal tax code Wednesday. They’re proposing deep cuts to both individual and corporate tax rates, saying that will help to supercharge a slow-growing economy.

“If we do this, we will create millions of new jobs for our people, and bring many, many businesses back to our shores,” Trump said Tuesday, describing the proposed overhaul as “massive tax cuts that our country desperately needs to thrive, to grow, to prosper.”

The president plans to promote the tax plan Wednesday afternoon at the Indiana State Fairgrounds in Indianapolis.

While many of the details still have to be filled in, House and Senate GOP leaders have been meeting for months with the Treasury secretary and a top White House economic adviser to fashion a plan they can agree on.

The Republican plan is expected to reduce the top individual income tax rate from 39.6 percent to 35 percent. The corporate rate would fall from 35 percent to around 20 percent.

“Tax reform is the most important thing we can do to restore confidence to this country, to get jobs and prosperity,” House Speaker Paul Ryan, R-Wis., told reporters Tuesday. “That is why we are so singularly focused on getting this done this year.”

Republican backers have framed the tax overhaul as a much-needed boost for the middle class. It would nearly double the standard deduction, so fewer people would have to go through the trouble of filing an itemized return.

“Many Americans are living paycheck to paycheck,” said Rep. Cathy McMorris Rodgers, R-Wash., chair of the House Republican Conference. “This is our moment to lift the financial burden on these hard-working men and women, give people more money in their pocketbooks to help manage the cost of living.”

“Democrats have strongly and firmly stood for the position that not one penny of tax cuts should go to the top one percent,” Senate Minority Leader Chuck Schumer, D-N.Y., said in a statement. “If Republicans push a tax bill to please their hard-right wealthy contributors, instead of working from the middle, they will have the same trouble with taxes that they’re having with health care.”

As they tried to do with health care, Republicans are preparing to use a procedural move to avoid the threat of a Democratic filibuster in the Senate.

But Trump has also tried to win Democratic support for the tax plan. Wednesday’s event in Indiana is designed in part to put pressure on that state’s Democratic senator, Joe Donnelly, who is up for re-election next year. Trump has held similar, campaign-style events in Missouri and North Dakota — both states he carried last year with Democratic senators who will be on the ballot in 2018.

Republicans hope to simplify the tax code by eliminating many deductions, although they’ve promised to preserve tax breaks for mortgage interest and charitable giving. The deduction for state and local taxes is on the chopping block. That would be especially costly for taxpayers in high-tax states like New York and California, many of which are governed by Democrats.

While closing tax loopholes would offset some of the lost revenue from lowering rates, the proposed tax plan could still balloon the federal deficit. Republican lawmakers reportedly plan to craft a budget that assumes up to $1.5 trillion in additional red ink over a decade.

Even that may not be enough to accommodate what proponents have described as a “historic” tax cuts. While some Republicans argue that faster economic growth sparked by the cuts would help to refill government coffers, independent experts are skeptical. Economists at Goldman Sachs estimated last week that tax cuts would add only 0.1 or 0.2 percent to GDP growth over the next couple of years. Both Treasury Secretary Steven Mnuchin and National Economic Council Director Gary Cohn are Goldman alums.

William Gale of the nonpartisan Tax Policy Center predicts Republicans will have to use budget gimmicks and overly-optimistic revenue forecasts to fit the proposed tax cut under their $1.5 trillion ceiling for increased deficits.