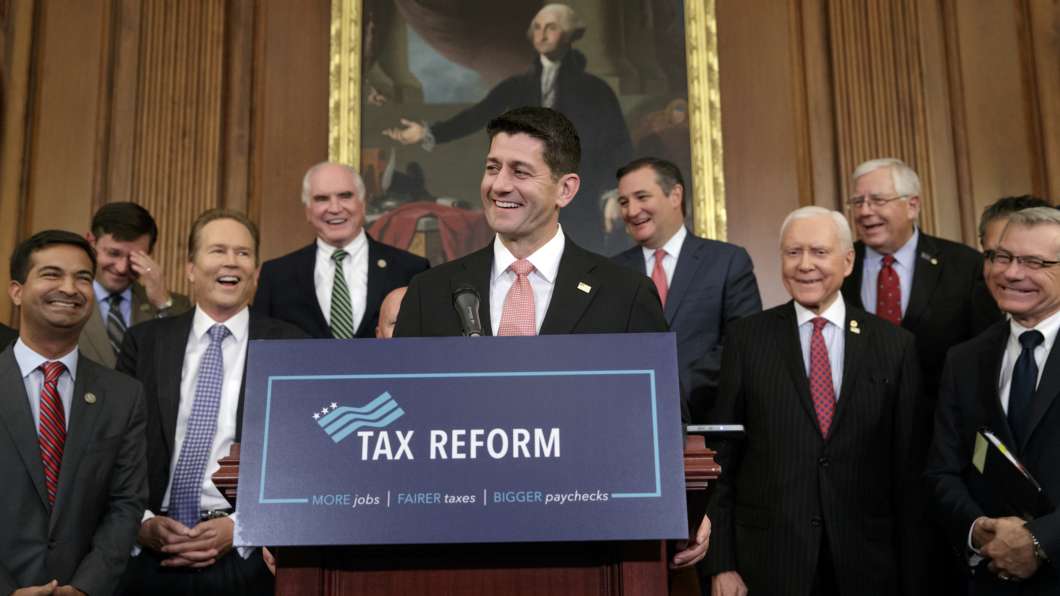 House Speaker Paul Ryan, R-Wis., talks about Republicans' proposed rewrite of the tax code at the Capitol on Sept. 27. The text of a tax bill is to be released Thursday.
Image credit: J. Scott Applewhite

House Republicans unveiled a draft tax bill on Thursday, calling for deep cuts in both individual and corporate tax rates.

“With this bill, we will grow our economy by delivering more jobs, fairer taxes, and bigger paychecks to Americans of all walks of life,” said Rep. Kevin Brady, R-Texas, chairman of the House Ways and Means Committee.

The rollout, originally scheduled for Wednesday, was postponed to give bill drafters more time. They’re still struggling to find sufficient revenue to avoid a budget-busting score. As a result, some of the tax changes have been made temporary or phased in over time.

Here are some of the highlights of the bill (you can read the full text here):

The plan leaves intact a top individual tax rate of 39.6 percent to address charges that the cuts are unduly favorable to the rich. The bill would raise the income threshold at which the top tax rate would apply to $500,000 or a million dollars for couples. In a boost for the wealthy, the plan also eliminates the alternative minimum tax and phases out the estate tax over a period of six years.

Broadly speaking, the GOP bill would sharply reduce taxes on both individuals and corporations, potentially draining trillions of dollars from federal coffers over the next decade. The Republican budget, however, makes room for only $1.5 trillion in revenue reduction over that period. And fast-track Senate rules, designed to avoid a Democratic filibuster, say the bill can’t add to the deficit beyond 10 years.

Republicans hope to offset some of the lost revenue from lower tax rates by eliminating tax breaks elsewhere in the code.

“With this plan, we are getting rid of loopholes for special interests and we are leveling the playing field,” said House Speaker Paul Ryan, R-Wisc.

But that’s politically challenging. Two of the costliest tax breaks — for mortgage interest and gifts to charity — were declared off-limits at the outset, although the draft plan limits the mortgage deduction on future home purchases to loans of $500,000, down from the current $1 million. Efforts to curtail other popular breaks — for retirement savings and state and local taxes — have faced pushback from the White House and Republicans in high-tax states.

The draft bill released by the House Ways and Means Committee would reduce the number of individual tax rates from seven to four: 12 percent, 25 percent, 35 percent and 39.6 percent. The bill also doubles the standard deduction, which will make tax-filing easier for some people. However, it eliminates personal exemptions, which could adversely affect larger families.

As expected, the corporate tax rate would drop from 35 percent to 20 percent. And the bill would establish a lower tax rate of 25 percent for so-called “pass through” businesses such as partnerships that currently pay taxes at their owners’ individual rate.

The bill aims to encourage business investment by allowing companies to deduct those costs immediately, rather than spreading the deduction over a period of years. However, this provision is scheduled to sunset after five years.

Multinational corporations would no longer be taxed on profits earned overseas, although the plan would establish a minimum tax rate of 10 percent on foreign subsidiaries.

Although House lawmakers floated the idea of limiting tax breaks for retirement savings, the draft bill unveiled today would preserve the deduction for 401(k) style savings.

The bill would eliminate the deduction for state and local income taxes, a move that’s particularly costly in high-tax states such as New York, New Jersey, and California. In an effort to mollify House Republicans from those states, drafters included a provision to allow taxpayers to deduct up to $10,000 in local property taxes.

The lower limit on mortgage interest that’s tax deductible is sure to invite opposition from the housing industry, a powerful player in Washington.

The Ways and Means Committee plans to take up the draft tax bill next week, with an eye towards a House vote before Thanksgiving. President Trump is eager to sign a tax overhaul by year’s end.