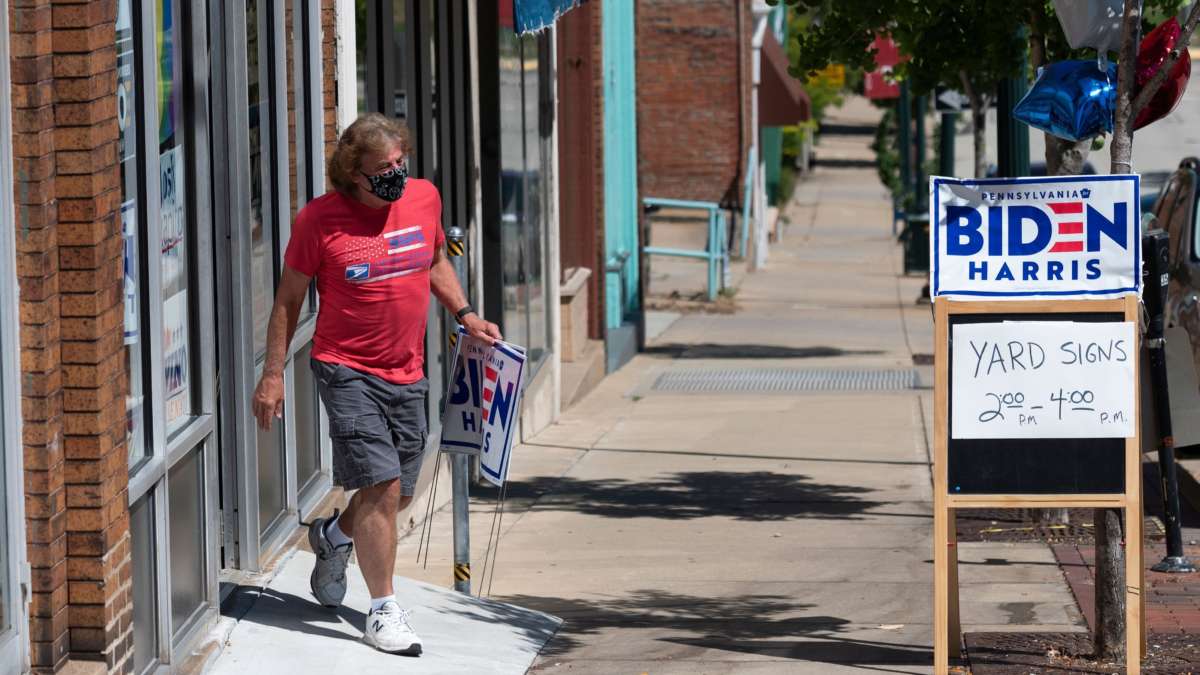 A man walks out of the Washington County Democratic Party office last week, in the suburbs of Pittsburgh, after taking a Joe Biden yard sign. Because of the coronavirus pandemic, Biden's campaign isn't doing any in-person door-knocking.
Image credit: Andrew Caballero-Reynolds

President Trump’s campaign says it knocks on a million doors a week. Joe Biden’s campaign hasn’t knocked on any doors to talk to voters for months. In lieu of in-person meetings, Democrats are focused on conversations they can have virtually.

“While you might hear our opponent spend a lot of time talking about the millions of door knocks or attempts that they’re making week to week, those metrics actually don’t have any impact on reaching voters,” Biden’s campaign manager, Jen O’Malley Dillon, told reporters in a call last week, downplay the clear door-knocking disparity. “Our metric of success, the numbers we look at and use, are conversations.”

In August, she said the Biden campaign had 2.6 million conversations with voters in battleground states. Those conversations were virtual, over the phone or via text message, or in person “when that is safe and is warranted,” she said. (The campaign also intends to begin door-to-door visits soon, not for any face-to-face meetings, but to drop off campaign literature and voter education materials.)

The Democrats’ strategy of mainly organizing from home via laptop or cellphone and forgoing traditional door-to-door canvassing is somewhat untested, but they’re banking on the assumption that it’s more effective in a pandemic.

Democrats say they’re not door knocking because safety is their main priority, and they don’t want to put people at risk of contracting COVID-19.

“We think what voters are looking for right now is responsible leadership and that comes from the VP and what he’s saying, but it also comes from the campaign,” said Molly Ritner, the Biden campaign’s deputy states director.

And because of the pandemic, Ritner, like other Democrats, says it feels like more Americans are at home, sometimes isolated, on their devices and eager to talk.

“What we’re finding is that we are able to actually connect and reach more people than we had been in previous cycles through the phone,” Ritner said.

“Door knocking is in our DNA”

But it’s not just the Biden campaign. Organizing has changed for state Democratic parties in key swing states and for a number of left-leaning groups that would have been helping Biden on the ground.

Both BlackPAC and Working America have between 10% and 20% of the paid organizing staff they had in 2016.

At this point in 2016, Working America, a group affiliated with the AFL-CIO, was having about 100,000 conversations a week with people on their front steps. The group has had zero since it paused its door-knocking operation in March.

“Door knocking is in our DNA. We believe that there is nothing — and the evidence supports this — that is as effective as a well-deployed face-to-face interaction,” said Matt Morrison, the group’s executive director. “That said, what we’ve lost in texture and interaction face to face, we’ve tried to make up for in scale.”

Working America has built an army of volunteers — writing letters, making calls and sending texts. And Morrison thinks it’s working. He says when the pandemic first began, his group focused on convincing people to wear masks. They followed up with people, and noticed a sizable increase in mask usage after their correspondence because, he believes, of the relationships they built.

“There’s no opposition on the other side”

But for Republicans, this is not an either-or operation. The Republican National Committee says it’s also contacting millions of people over the phone every week. But their volunteers and organizers are also knocking on doors in person.

“Everything is one sided on the ground,” said Joe Gruters, the chairman of the Florida Republican Party. “We’re doing our many rallies, we’re doing the bus tours, we’re doing meet and greets. We’re doing it in person. The difference is … there’s no opposition on the other side.”

Gruters says it feels like the physical Biden campaign is “nonexistent” on the ground in Florida. The “virtual stuff” helps, he says, but in his view “there’s nothing that replaces the basic blocking and tackling of campaigns, and that’s the pounding of the pavement, walking door to door.”

It was generally accepted in 2016 that Hillary Clinton’s ground game was superior to the makeshift Trump operation. And yet this cycle, it’s the Trump team that brags about building a “muscular field operation” compared to Democrats, whom it describes as waging an almost-exclusive “air war.”

In an unusual role-reversal, the Trump team is modeling itself off of Democrats. It requires staffers to read a book about Barack Obama’s field operation, called Groundbreakers: How Obama’s 2.2 Million Volunteers Transformed Campaigning in America.

One of the co-authors, Hahrie Han, was surprised to hear that her book has become a staple in the Trump campaign, and she says she’s not sure if the campaign understands her main message.

“So the Trump campaign, they read the book and then they say, ‘OK, like I need to go out and have conversations with people at the door.’ Yes, that is a part of it, but it’s part of a bigger interlocking system,” said Han, a professor at Johns Hopkins University. “On the field side, in some ways, the work that is the most important can often be the most invisible.”

What Han means is that it wasn’t just the tactical door-knocking operation that made Obama’s team so successful; his campaign, she says, was adept at building relationships before it even got to the door.

Political scientists and campaign operatives agree that having personal conversations at the door is a proven way to marginally boost turnout. But, they add, often those conversations are done poorly.

David Broockman, from the University of California Berkeley, has done extensive research on door knocking and campaign persuasion efforts. He says campaigns often overstate the degree to which they are actually engaged in on-the-ground organizing.

“The vast majority of people even in normal years are not getting contacted on doors,” he said. “Just knocking on the door doesn’t turn out a voter. It’s having a conversation with a voter that turns out a voter.”

And Broockman says you can have that conversation over the phone. In fact, you can probably have more conversations because, he points out, you save time when you don’t have to walk from house to house.

But as for the big question of whether Democrats are at a disadvantage by doing this work almost exclusively via phone instead of in person, Broockman says he’s not sure.

“My guess is it’s like one of the many other things in a campaign that matters a little bit, but is just really unlikely to prove decisive to the whole thing,” he said.