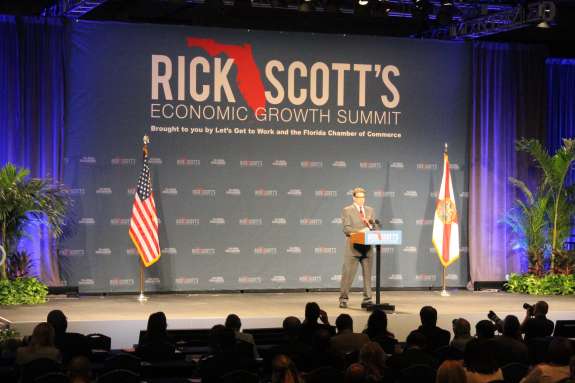 “And I say that for two reasons, number one because it’s true,” said Huckabee.

“And because this is his conference and anything I can do to suck up to him and his donors, by gosh, I’m going to do. So it’s just as simple as that.”

Huckabee also talked about his plan to reform the tax code and abolish the I-R-S.

Other speakers included Wisconsin Governor Scott Walker- who is yet to declare his bid for the Republican presidential nomination-  and Former Texas Governor Rick Perry.

Perry said executive experience is important for the next president.

And he talked about the need for border security.

“Wouldn’t it be awesome if the Federal Government actually lived up to one of the constitutional requirements and secured the border of this country,” said Perry.

“And I know a little bit about that.”

Asked by a member of the audience about how the Republican party can diversify and bring more people into the tent, Wisconsin Governor Scott Walker said candidates should “go places where Republicans don’t typically go.”

“We need to talk in ways that we don’t typically talk about, we need to be true to our principals, true to our concepts,” said Walker.

Former Florida Governor Jeb Bush said he would decide soon on whether to run for president.

“There’s a lot of people, all of whom are qualified and good people,” said Bush.

“I hope that I’ll have a story of leadership, a story of accomplishment.”

New Jersey Governor Chris Christie is also seen as a potential candidate. He told Gov. Scott he would be prepared to embrace what he called the  ‘third rail’ issue of entitlement reform- and raise the retirement age.

“Now I don’t believe the world will stop spinning on its axis, for raising the retirement age two years in twenty five,” said Christie.

“Second, I believe Social Security, like every other program that we have that makes sense should be means tested.”

Senator Marco Rubio decided to skip the summit for a vote in Washington DC, instead delivering a short video message.