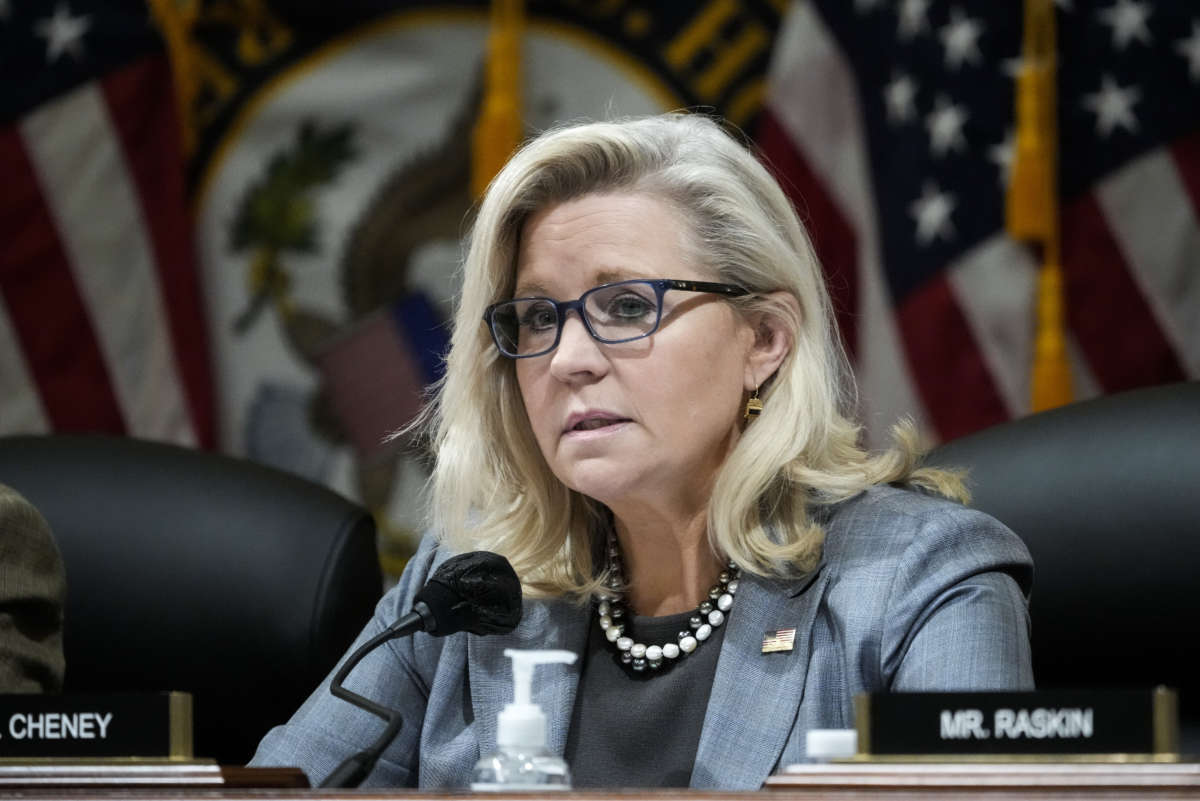 Liz Cheney is the top Republican on the House panel investigating the violent attack on the Capitol, and her role in the historic hearings that begin Thursday night will impact her own political future, one that may no longer be in Congress.

While some in her party initially lambasted then-President Trump’s role in the Jan. 6 siege, they quickly reversed course. Cheney’s decision to continue public and sustained criticism of Trump made her an outcast in the party she reveres.

When protestors breached the Capitol on Jan. 6, Cheney was the third highest ranking House Republican.

Maryland Democratic Rep. Jamie Raskin, a former constitutional law professor who was preparing his remarks to certify the 2020 election results, saw texts about the threat and walked over to Cheney on the House floor.

“She was actually the first person that I went to when someone texted me a photo of the insurrectionists who had entered the building brandishing a Confederate battle flag, and I crossed the aisle and I said, ‘Liz, look, it looks like we’re under new management here,'” Raskin told NPR.

Hours later, members from both parties were held in a secure location, trying to figure out what to do and whether it was safe to reconvene. Raskin said Cheney joined the chair of the House Democratic Caucus in that moment.

“She got up with Hakeem Jeffries in the safe room, where we were all huddled, to say that she was determined that we count the votes,” Raskin said.

Before serving in the House, she already had a notable political name and career in her own right. She worked on her father Dick Cheney’s campaign when he was George W. Bush’s running mate in 2000.

She was later a top aide at the State Department during the Bush administration, focusing on promoting democracy in the Middle East.

Former Virginia Rep. Barbara Comstock met Cheney when they both worked on 2000 campaign and served in the House when Cheney chaired the GOP conference. She said Cheney’s work at the State Department informs her approach to the Jan. 6 committee’s work.

“I think she comes to it from the standpoint of, you know, that we are an authority in the world on democracy and the importance of us taking this very seriously,” Comstock said.

Comstock, a vocal critic of Trump’s, said Cheney’s experience in a political family that often dealt with high profile controversies prepped for this moment.

“She certainly saw her father and her mother … come under attack plenty of times for doing what I’m sure she thought was the right thing, and so I think that makes it kind of easy,” Comstock told NPR.

“It’s not fun to do this, but I think she understands that when you have political capital, as Maggie Thatcher used to say, you know sometimes you have to spend it,” Comstock added.

Cheney built relationships with ideological opposites in the House

Cheney’s voting record in the House is solidly conservative. She backed Trump’s agenda 93% of the time.

California Democratic Rep. Zoe Lofgren, a fellow lawyer and member of the Jan. 6 committee, didn’t know Cheney before they worked on the investigation together.

“She’s very, very conservative, and I’m not. So there’s a lot of issues we don’t agree on,” Lofgren told NPR. “Having said that, I’ve been very impressed by her commitment to the truth, her intellectual honesty, her skill as a lawyer.”

Cheney opposed the first impeachment of President Trump in 2019 but shocked her conference when she joined 9 other House Republicans to back his second impeachment after Jan. 6.

Her move to continue to speak out about Trump drove her colleagues loyal to the former president to strip her of her leadership position. The night before they ousted her, Cheney took to the House floor to argue her position was in line with her party’s principles.

Cheney’s decision has isolated her. Raskin said he was with her on the floor when Rep. Marjorie Taylor Greene, R- Ga., approached her and yelled that she was a “traitor.” Raskin wouldn’t share Cheney’s response, but said it “wasn’t flattering” about Greene.

“She doesn’t complain. You know, I think she’s nobody’s fool. She knows what she’s getting into, and she did what she thought was right. And I give her credit for that,” Lofgren said.

Raskin bonded with Cheney over their legal backgrounds. He wrote a book criticizing the legal reasoning used by the Supreme Court to decide the 2000 election and said Cheney ribbed him about his thesis.

“She teased me about that. The very first time we met, saying, ‘So you don’t think that my father should have been vice president?’ And I said, ‘Well, it’s nothing personal, but I think that that decision was utterly fraudulent,'” Raskin recalled.

He says their ability to laugh about their different political backgrounds made them fast friends: “I remember the very first time she took me to her office and I walked in, and there was this huge Soviet-sized portrait of Dick Cheney up on the wall. And I said, ‘Liz, I’ve got one of those in my office too!’ You know, and she started cracking up.”

Trump has made Cheney a top midterm target

“There is no RINO [Republican In Name Only] in America who has thrown in her lot with the radical left more than Liz Cheney,” he told supporters.

In her video announcement running for another term, Cheney didn’t mention Trump by name but made her stand against him part of her campaign message.

“When I know something is wrong, I will say so,” Cheney said. “I won’t waver or back down. I won’t surrender to pressure or intimidation.”

Trump got a higher percentage of the vote in Wyoming than in any other state in 2020, and most expect that the backlash at home for Cheney will mean she can’t overcome a primary challenge from Hageman in August.

Comstock, however, believes she can win reelection and continue to make a mark in the Republican Party.

“I think there’s all kinds of opportunities for her. So I know her future is bright in any direction she wants to go,” Comstock said. “But I’m particularly pleased that she has been willing to take the slings and arrows to do what’s right and to set the record straight.”

Cheney’s party could retake control of the House in the midterms. If she does manage to win another term, she is likely to still be a lonely voice in a party led by loyalists to the former president.