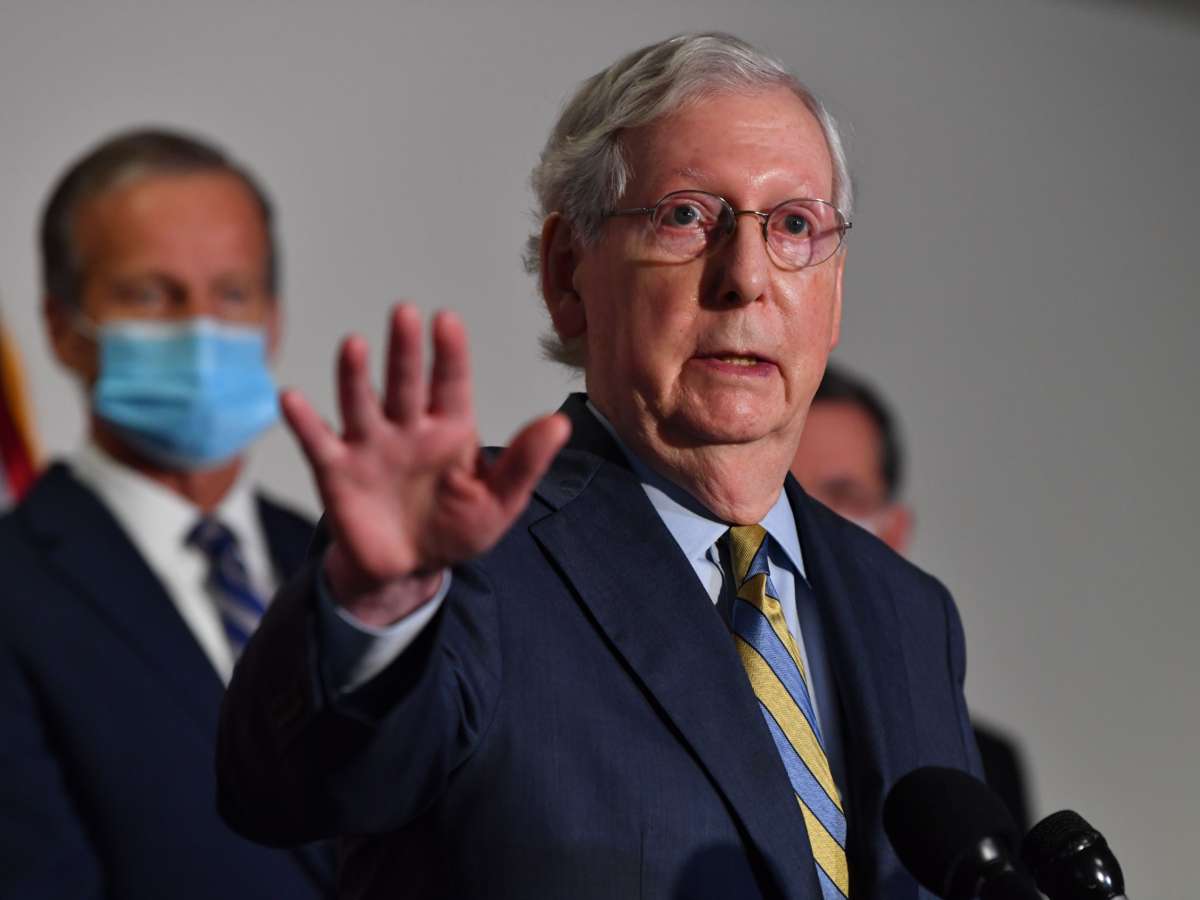 Senate Majority Leader Mitch McConnell has said there will be an orderly transition of power.
Image credit: NICHOLAS KAMM

No votes have been counted in the election of 2020 but a battle already is raging over the integrity of the tally and the process that will follow.

President Trump suggested he might not accept the election results if Democratic nominee Joe Biden is declared the winner.

“We’re going to have to see what happens. You know that,” he said on Wednesday evening in response to a question about whether he would commit to a peaceful transfer of power.

“I’ve been complaining very strongly about the ballots. And the ballots are a disaster,” Trump said, once again pushing his unsubstantiated claims about mail-in ballot fraud.

Shortly after his remarks, Sen. Mitt Romney, R-Utah, tweeted his vehement disapproval: “Fundamental to democracy is the peaceful transition of power; without that, there is Belarus. Any suggestion that a president might not respect this Constitutional guarantee is both unthinkable and unacceptable.”

Other top Republicans followed suit Thursday morning. Majority Leader Mitch McConnell, R-Ky., wrote: “There will be an orderly transition just as there has been every four years since 1792.”

The third-ranking House Republican, Rep. Liz Cheney, R-Wyo., also shared her rejection of Trump’s remarks, writing, “The peaceful transfer of power is enshrined in our Constitution and fundamental to the survival of our Republic. America’s leaders swear an oath to the Constitution. We will uphold that oath.”

Also pushing back was Sen. Marco Rubio, R-Fla., tweeting, “As we have done for over two centuries we will have a legitimate & fair election.”

While more Republicans joined their colleagues in emphasizing even a Trump loss would involve an orderly transfer of power to the new administration, House Minority Leader Kevin McCarthy of California downplayed the president’s statement and pointed to comments last month from former Democratic nominee Hillary Clinton, who suggested Biden not concede the election if it’s close.

McCarthy said he believes Trump will win reelection and there will be “a smooth transition” to a second term telling reporters: “I know this will keep you up at night, but don’t worry about it.”

Former Vice President Joe Biden, Democrats’ nominee and Trump’s challenger, told reporters on Wednesday he was both vexed and worried about the president’s remarks.

“What country are we in?” Biden said. “I’m being facetious … Look, he says the most irrational things. I don’t know what to say.”

House Speaker Nancy Pelosi told reporters the president’s comments came as “no surprise” and reflected a pattern of contempt for the democratic process. All the same, Pelosi said she would not bring a resolution to the floor condemning the president for those remarks.

“I don’t think he’s worth the trouble at this point,” she said, noting the election is just 40 days away.

“When a head of state anywhere in the world with authoritarian tendencies tells you they intend to do something outrageous and not an accept a peaceful transition after an election … believe them,” Coons said.

Trump’s remarks on Wednesday followed months’ worth of rhetoric casting doubts on the integrity of American elections, delivered during a time when U.S. government officials say they’re also being targeted by foreign enemies.

U.S. intelligence officials warned this week how closely foreign powers are watching the political environment within the United States and about possible schemes to raise doubts about the results of the election.

“Foreign actors and cybercriminals could create new websites, change existing websites, and create or share corresponding social media content to spread false information in an attempt to discredit the electoral process and undermine confidence in U.S. democratic institutions,” read one announcement from the FBI and the Cybersecurity and Infrastructure Security Agency.

Because of the increased use of mail-in ballots this cycle, the announcement explained, foreign actors or cybercriminals could use the additional time required to certify and announce election results by “disseminating disinformation that includes reports of voter suppression, cyberattacks targeting election infrastructure, voter or ballot fraud, and other problems intended to convince the public of the elections’ illegitimacy.”

Continued the announcement: “The public should also be aware that if foreign actors or cyber criminals were able to successfully change an election-related website, the underlying data and internal systems would remain uncompromised.”

In other words, even if a county faithfully and correctly tabulated a result for Candidate X, an attacker could try to make voters believe, falsely, that Candidate Y won. Untangling those accounts from the reality might take hours, days or longer.

Local governments could work combat this and strengthen voters’ confidence by solely using websites that end in .gov. Domains ending in .com or .org could be used by bad actors to pose as official websites to defraud the public.

But cyberspecialists say many counties aren’t taking that step.

Voting and results themselves likely safe

In a subsequent announcement on Thursday, the FBI and CISA said there has been no reporting to indicate any cyber activity by bad actors has been preventing Americans from casting a ballot or changing actual vote tallies.

“However, even if actors did achieve such an impact, the public should be aware that election officials have multiple safeguards and plans in place — such as provisional ballots to ensure registered voters can cast ballots, paper backups, and backup pollbooks—to limit the impact and recover from a cyber incident with minimal disruption to voting,” the announcement said.

Chris Krebs, the director of CISA, has stressed the importance of recognizing that election results may take some time to count and that patience while waiting for them “goes a long way.”