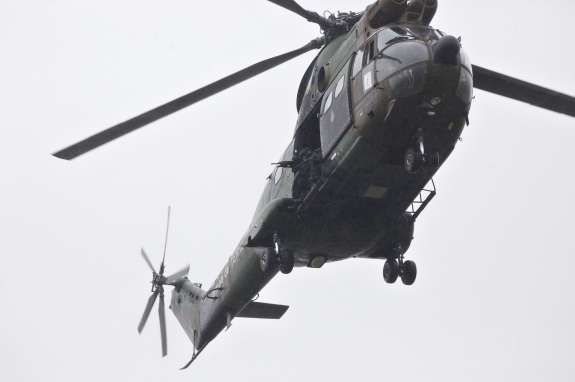 A nationwide manhunt for the suspects of France’s deadliest terrorist attack in more than 50 years ended in a hail of gunfire in two separate hostage sieges on Friday. After hours of two tense standoffs that shut down parts of the Paris metro area, the two main suspects in the attack on a satirical magazine and another man wanted in connection with the killing of a police officer on Thursday are dead, multiple media outlets, including Le Monde and The Associated Press, are reporting.

At this time, there are conflicting reports on whether any hostages were killed during the operation.

It all started when police cornered Said and Chérif Kouachi, who were suspected of killing 12 in the Charlie Hebdo attack, at a print shop in the small town of Dammartin-en-Goele.

Separately, in eastern Paris, a gunman entered a kosher shop and reportedly took at least one person hostage.

A little after 11 a.m. ET, and as the sun began to set in France, explosions at both locations were heard by reporters at the scene.

NPR’s Lauren Frayer reported that French television showed what appeared to be civilians streaming out of the kosher grocery store, and television images showed a large explosion at the print shop in Dammartin-en-Goele. That was followed by smoke billowing from the building.

It is still unclear whether there were any other casualties.

Multiple news agencies, including The Associated Press, the New York Times, the Wall Street Journal and France 24, say the suspect who was holding hostages in the kosher shop is Amedy Coulibaly, who authorities tell them is connected to the Kouachi brothers.

NPR’s Eleanor Beardsley reports that police were first tipped off the Kouachi brothers when a resident reported a stolen car in the small village of Dammartin-en-Goele, 25 miles northeast of Paris. The caller recognized the brothers and told police that they were heavily armed.

Police moved in and surrounded the print shop, located in an industrial center not far from the Charles de Gaulle airport outside Paris. For hours, special tactical units kept watch, while helicopters swooped overhead.

As that was unfolding, another gunman walked into the kosher shop in eastern Paris, reportedly taking a handful of hostages.

Eleanor reported that the series of events have left the city — already reeling from the worst terrorist attack in more than 50 years — in a state of shock. Police cordoned off parts of Paris, and officers in tactical gear and with big guns walked through the streets as sirens sounded everywhere.

President François Hollande addressed the nation, saying police would do everything possible to guarantee people’s safety.

“France values its principles,” Hollande said. “It will be able to resist all of the challenges. I have confidence in you.”

This is a breaking news story. As often happens in situations like these, some information reported early may turn out to be inaccurate. We’ll move quickly to correct the record and we’ll only point to the best information we have at the time. Refresh this page for the latest.

President François Hollande will address his country at 2 p.m. ET, according to Palais de l’Élysée.

According to multiple media outlets, both hostage standoffs in France are over.

There is still no word on any other casualties.

NPR’s Lauren Frayer reported that French television showed what appeared to be civilians streaming out of the kosher grocery store in eastern Paris.

Television images showed a large explosion at a print shop in Dammartin-en-Goele. That was followed by smoke billowing from the building.

She says people started running when they heard it.

The booms, she told Morning Edition, were followed by sirens.

It’s still unclear what is going on.

NPR’s Eleanor Beardsley reports that police have cordoned off a big area of eastern Paris. She reports that “everyone is in a state of shock.”

“People are angry and nervous,” she told our Newscast unit. “It’s a crazy scene.”

You can hear sirens and police dressed in tactical gear with big guns walking the city.

Television images are showing light smoke coming from the printing company where the Kouachi brothers are thought to be holed up.

Police forces in tactical gear were also on the roof of the building.

Reuters reports one of its reporters heard gunshots and “several explosions.”

There’s a lot going on in this story. Here, we’ll try to lay out all of the known connections plainly:

— There are four events to keep in mind. 1. The shooting at Charlie Hebdo on Wednesday morning. 2. The shooting death of a female police officer on Thursday in Montrouge. 3. An ongoing standoff in Dammartin-en-Goele, where police believe the two main suspects in the Charlie Hebdo shooting, Said and Chérif Kouachi, are holed up in the building of a printing company. 4. An ongoing standoff at a kosher shop in eastern Paris, where, according to multiple media reports, police believe Amedy Coulibaly has taken a handful of hostages.

— Earlier today, police named Coulibaly as a suspect in the shooting death of the female police officer on Thursday.

— NPR’s Dina Temple-Raston reported on Morning Edition that U.S. officials have been telling her privately that Thursday’s shooting incident was terrorism related.

— Dina says that authorities now believe that Coulibaly is a friend of the Kouachi brothers.

— Le Parisen reports that in 2010, Coulibaly was implicated in trying to help in the escape of one of the masterminds of terrorist attacks that happened in 1995. The news outlet also reports that Coulibaly was convicted on terrorism charges.

— As we reported, Chérif Kouachi was implicated in that same incident in 2010.

Numerous news organizations have reported that police sources tell them that a shooting that left one police officer dead on Thursday is linked to the shootings at the offices of Charlie Hebdo.

France 24 reports that the people suspected of committing that crime belong to the same organizations as the Kouachi brothers.

Police have officially released a photograph of two suspects in that shooting in Montrouge. In that flier, police say the two — Hayat Boumeddiene, 26, and Amedy Coulibaly, 32 — are wanted in a murder committed in connection with a “terrorist organization.”

France’s Interior Minister Bernard Cazeneuve is at the scene of an apparent hostage situation in eastern Paris.

Television images have shown dozens of police officers in tactical gear in front of the kosher shop.

The AP moved this alert:

It’s worth noting that it’s not clear whether all of these events are related.

In case you have not been paying attention, here’s a quick summary of what’s been happening in France:

Wednesday morning, at least two gunmen entered the Paris offices of Charlie Hebdo, a satirical magazine that has in the past been threatened by Islamic extremists, and opened fire, killing 12 people, including four of the magazine’s founding cartoonists.

Police launched a massive manhunt for two suspects: Said and Chérif Kouachi, French citizens whom authorities had been watching for some time. Chérif was convicted on terrorism charges in 2008. He served 18 months for helping to funnel fighters from France to Iraq.

Today, that manhunt seems to have come to a climax, because police believe the two men are cornered at a printing company’s building in a city northeast of Paris.

Multiple news outlets, including AFP, France 24 and Le Monde, are reporting that an armed man has entered a kosher shop in eastern Paris and may have taken a hostage.

There is no word on whether this incident, which police have not confirmed, might be related to the attack on Charlie Hebdo.

On Twitter, an Interior Ministry spokesman said the men now in a standoff with police are “certain to be the Kouachi brothers.” The spokesman said it was still not clear whether the two suspects had taken any hostages.

“The priority is to establish a dialogue with the suspects,” the spokesman added.

He added that there had been no deaths or injuries at the time and that police had not launched an assault on the building.

Citing an unnamed French official, the AP says police have “made contact with terror suspects.”