Reporter’s Notebook: What It Was Like On Israel’s ‘Peace Plane’ To UAE 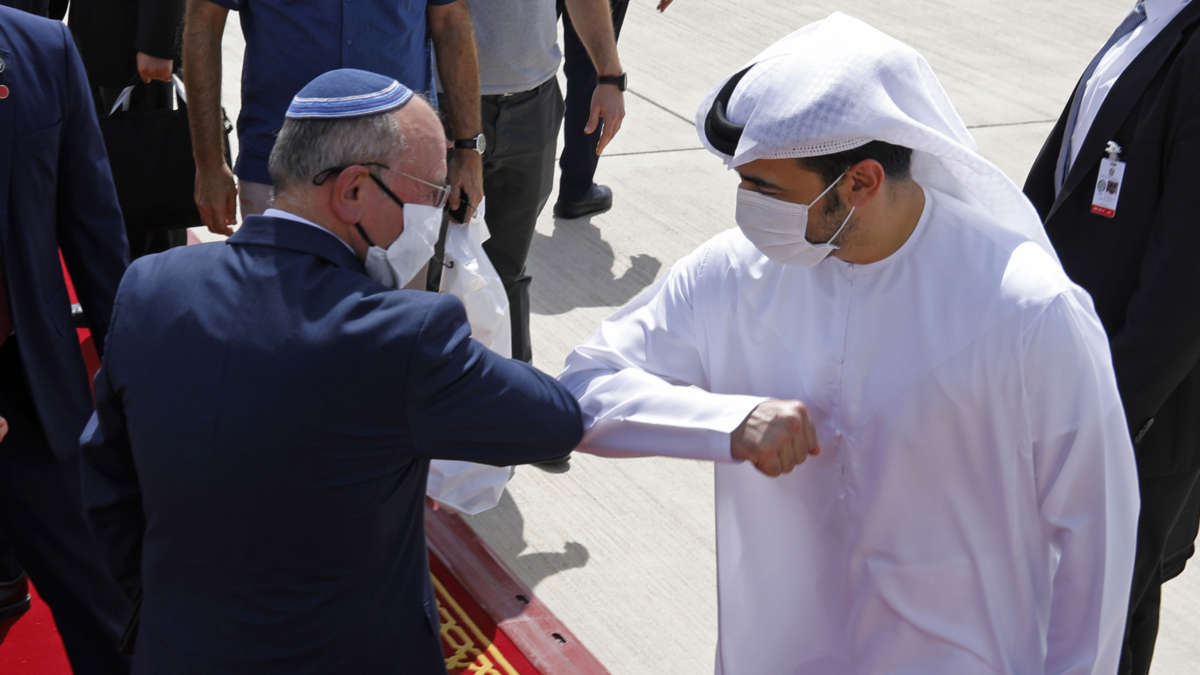 It would have been unimaginable only weeks ago to see Israeli officials exit a Star of David-adorned jetliner in the United Arab Emirates and walk down a red carpet on the tarmac.

But that’s what happened Monday, marking a first for the countries after they agreed to establish diplomatic relations last month.

Their U.S.-brokered deal is rooted in the geopolitical interests of the leaders involved. But the El Al Israel Airlines flight carrying Israeli and U.S. delegates from Tel Aviv to Abu Dhabi was partly aimed at tugging the heartstrings of ordinary Israelis, who have yearned for acceptance in a hostile neighborhood.

The news was meant to play well in the United States, too, with the U.S. Embassy in Jerusalem informally dubbing it the Peace Plane.

FILE – In this Monday, Aug. 31, 2020 file photo, an official stands at the door of an Israeli El Al airliner after it landed in Abu Dhabi, United Arab Emirates. The Saudi Press Agency announced Wednesday, Sept. 2, 2020, that it will allow flights “from all countries” to cross its skies to reach the United Arab Emirates. The announcement comes just days after Saudi Arabia allowed the first direct Israeli commercial passenger flight to use its airspace to reach the UAE, signaling acquiescence for a breakthrough U.S.-brokered deal by the United Arab Emirates to normalize relations with Israel. (Nir Elias/Pool Photo via AP, File)

The passenger headrests and food trays were labeled with the phrase “making history” in Hebrew, Arabic and English. The word “peace” – again in all three languages – adorned the plane’s fuselage above the cockpit. Veteran flight attendants called it the most moving flight of their careers.

President Trump’s son-in-law and senior adviser Jared Kushner sat in business class — without wearing a face mask during stretches of the crowded flight. Other seats were reserved for Israeli and U.S. news outlets. (They included NPR, CNN, The Associated Press, Bloomberg and The Wall Street Journal, but excluded The New York Times and The Washington Post for reasons not fully explained.)

The welcoming ceremony in Abu Dhabi was unusual: The Israeli and American officials essentially welcomed themselves in remarks on the tarmac, while top Emirati officials waited for them in a gilded reception room. Images of the visiting and host delegations’ meeting were released later, but the meeting was closed to the press.

And although traveling journalists attended a dinner with cabinet members and other prominent Emiratis, our hosts’ candid remarks about Israel — after their country overturned its decades-long boycott of Israel in just one day — were off the record and private. Though the government did produce this gauzy video of the event.

The implicit message was one of Emirati international stature.

To my left sat Omran Sharaf, manager of the UAE’s Mars mission launched in July, the Arab world’s first. To my right was Reem Al Hashimy, director-general of the world expo planned for Dubai next year.

The dinner was held in the futuristic, sunken, orb-shaped Louvre Abu Dhabi museum, which has licensed the Musée du Louvre brand and displays parts of its collection. The oil-rich emirate of Abu Dhabi has built an outpost of one of the world’s cultural treasure troves.

Missing from the peace party were the people with whom Israel is most in conflict: Palestinians. Palestinian leaders long assumed its Arab allies would shun relations with Israel until the Israeli-Palestinian conflict was resolved.

They protested the Emirates’ move, considering it an added injury given President Trump’s consistent support for Israel in some of the conflict’s most difficult issues.

The UAE has sought to reassure Palestinians it supports their quest for an independent state, but Emiratis were offended by what they perceived as Palestinian insults of their ruler, Mohammed bin Zayed al-Nahyan, and his decision to recognize Israel. Several Emiratis in recent weeks have privately expressed to NPR their disdain for the Palestinian leadership.

The Israel-UAE deal is expected to yield lucrative business opportunities for the two economic powerhouses, including plans to market regional tourism packages with Jordan and Egypt. Palestinians, whose economic potential is stymied by the Israeli occupation of the West Bank and blockade of Gaza, might have stood to benefit from the new deal.

But when NPR asked Kushner and later an Emirati foreign affairs official if such an offer was in the making, both said no — not that Palestinian leaders would be willing to take part in the countries’ normalization deal anyway.

No celebratory Emirati airliner has departed for Israel. Instead the Emiratis have their sights on a very different aircraft: the stealth F-35 Joint Strike Fighter.

Despite Israel’s concerns that selling the UAE the F-35 would erode its military advantage in the region, the Trump administration strongly suggests it could reward the UAE for its new diplomacy with the F-35 in a way that would still preserve Israel’s upper hand.

Kushner and his entourage paid a visit to an Emirati airbase where the U.S. military deploys several of its own F-35s for Middle East missions. On the airfield, Kushner and mustachioed U.S. military pilots posed for photos with the first female Emirati to fly the F-16, Mariam al-Mansouri, who has conducted airstrikes on ISIS in Syria.

They stood in front of a U.S.-built F-16 emblazoned with the UAE flag. Two gray F-35s parked close by remained in place like unacknowledged elephants in a room.

But that sensitive topic was downplayed by Emirati and Israeli officials on this trip. Instead, they sat at U-shaped tables in the luxury St. Regis Abu Dhabi hotel to hammer out the initial details of their emerging relationship, including, according to Prime Minister Benjamin Netanyahu’s office, “a media plan directed at public opinion in both countries.”

A talking point they have decided to promote: It is not a cold peace, like Israel’s ties with Egypt and Jordan with which it fought multiple wars, but rather a friendship of peoples.

One test of that will come when regular flights begin between the two countries — Israel hopes it will be by the end of the year — carrying ordinary citizens, not only officials and journalists, and without red carpets on the tarmac.