Report: RNC Expected To Move Most Of Convention To Jacksonville 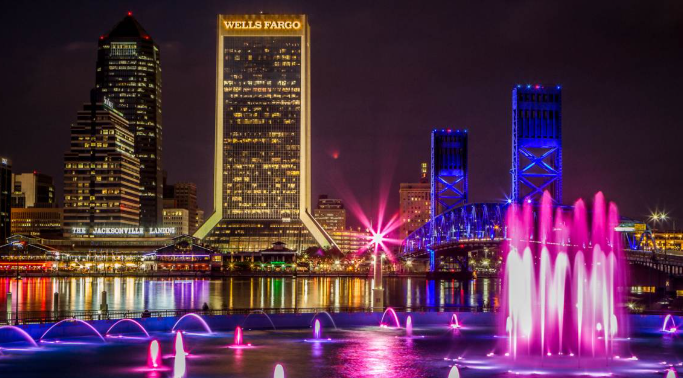 The Washington Post reports that much of the RNC will be moved from Charlotte to Jacksonville, Florida. Visit Jacksonville

The Republican National Committee has tentatively decided to move much of its political convention to Jacksonville, Florida, while leaving some of the business aspects of the convention in Charlotte, according to a story in the Washington Post.

Florida Gov. Ron DeSantis, a Republican, is enthusiastic about hosting the RNC. Jacksonville has another advantage over other cities under consideration, including Charlotte: a Republican mayor and Republican-majority City Council.

Jackonsville Mayor Lenny Curry has been courting the convention for weeks. The city has said it would host the main events in VyStar Arena, which has 15,000 seats.

An RNC official told WFAE Wednesday morning that the Jacksonville report is “premature” and that the GOP is still considering other cities.

GOP officials were in Phoenix on Tuesday, and planned to be in Dallas later this week. They have also toured Nashville, Tennessee, and Savannah, Georgia.

Orlando and New Orleans are also being considered.

RNC officials have said that Charlotte would still host some parts of the convention, in part to satisfy its contractual obligations with the city and the local host committee, which is tasked with raising $70 million for the event.

City Attorney Patrick Baker has been meeting with RNC planners for the past week, trying to determine what a “business-only” convention in Charlotte might look like. Baker said Tuesday that the city and GOP haven’t made any progress so far.

President Trump decided to move his acceptance speech from Charlotte because of Democratic Gov. Roy Cooper’s refusal to guarantee that 19,000 people could fill the Spectrum Center — without wearing masks or face coverings.

But even holding small meetings in Charlotte could be a challenge. Under Phase 2 of reopening – which lasts until at least June 26 — North Carolina only allows indoor gatherings with 10 or fewer people.

Florida also has COVID-19 limits on gatherings and occupancy. But the state is moving faster to reopen than North Carolina.

The state has invited NBA teams to finish their seasons in Orlando, and the city’s major theme parks are preparing to open. Universal Studios in Orlando opened last week.

The city of Charlotte said in a statement Wednesday that it was still “willing to work in good faith to complete its contractual obligations.”

“The city has not been officially informed of the RNC’s intent to relocate the convention,” reads the statement sent by a city spokesperson. “Considering the media reports of the RNC’s apparent unilateral decision to relocate a substantial portion of the convention to Jacksonville, an immediate discussion with the RNC and other partners regarding contractual obligations and remedies resulting from this appaernt decision is required.”

McDaniel said on the Hugh Hewitt show Wednesday that Cooper “made a decision politically not to help us.” Cooper has said he wanted to “protect the health of participants as well as North Carolinians.”