Rep. Castor and Florida climate activists tout the benefits of the Build Back Better Act 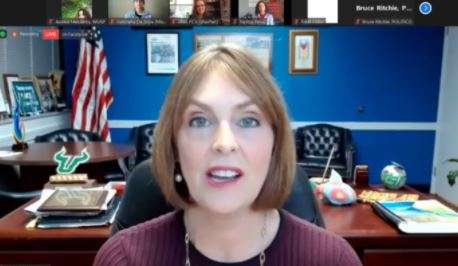 Florida climate leaders met virtually Tuesday to discuss how the Build Back Better Act can benefit the state and its residents. Congress is still working to pass the legislation, which is being called the single largest investment in clean energy and climate in history.

Castor pushed for the passage of President Joe Biden’s initiative, which has stalled in the U.S. Senate after passing the House in November as a $2.2 trillion package with programs in climate, health and education.

If the Build Back Better Act fails to pass, the environmental provisions could live on if Congressional leaders consider them separately in a climate bill.

“Some of the most important provisions in the Build Back Better Act that would lower costs for Florida families and businesses include a new commitment to clean energy … lower cost energy, energy efficiency, more tax credits for electric vehicles, improved transit, more efficient buildings that will help everyone lower their electric bills, extensive new rebates for consumers for appliances and to help them save money on those utility bills,” said Castor.

The Tampa Bay region could see significant investments in transit, according to Castor. And she said the area needs it.

“So being able to … put the pressure on utilities such as Tampa Electric to dim down on … increasing their prices for their consumers, and trying to find ways in how they can save money for consumers and provide cleaner energy that’s more sustainable,” said Da Silva.

Last week, Tampa Electric requested approval from the Florida Public Service Commission to pass along about $165 million in additional costs to customers because of higher-than-expected natural gas prices. Residential customers who use 1,000 kilowatt hours of electricity a month would see their bills increase from $120.91 to $131.87, under the proposal.

Florida Conservation Voters executive director, Aliki Moncrief, brought up another issue regarding utilities, saying they are trying to change the current state policy on generating solar energy through SB 1024.

She said she’s excited to see “such great momentum” in Washington, but said Tallahassee is currently taking steps backwards by moving forward with this “anti-net metering bill.”

“We couldn’t be more in opposition to this net metering bill. Instead, we are very much excited and supportive of legislation like the Build Back Better Act.”

Build Back Better will help to address environmental injustice and reduce pollution that drives extreme weather events, she said.

“Florida is home to like 5.3 million Latinos, according to that 2020 census, with many of them living in communities that are overburdened by pollution from fossil fuels,” said Perez.

“We are three times more likely to be negatively affected by air pollution because of where we live. And we live in counties that are currently violating these ground ozone standards. We need to ensure that these plans are put into action to preserve our lands for future generations.”