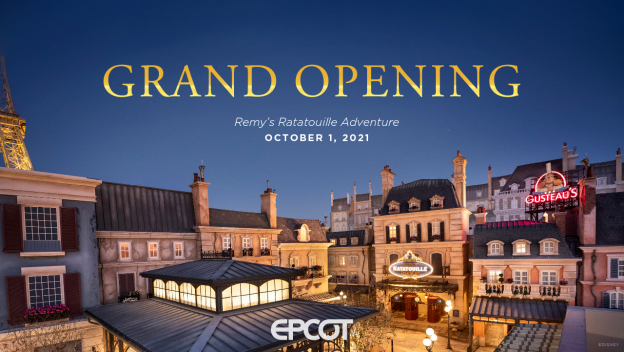 Disney announced today that its Remy’s Ratatouille Adventure at Epcot will open in October as part of the Orlando theme parks’ 50th anniversary celebrations.

Just Announced! Remy’s Ratatouille Adventure will open at EPCOT on Oct. 1, 2021 to help kick off the opening season of the @WaltDisneyWorld Resort 50th Anniversary celebration. Get more details on the Disney Parks Blog: https://t.co/ZZydSZ3IpY #DisneyWorld50 pic.twitter.com/cI7OU9TyX4

The 4D ride will kick off Disney’s “The World’s Most Magical Celebration” opening on October 1, the same day 50 years ago Walt Disney World first welcomed guests.

The family friendly ride has no height restrictions and will shrink visitors to the size of the Little Chef so that they can explore Gusteau’s famous restaurant.

The ride is part of a newly renovated France pavilion that will open on the same day.

Visitors can walk through scenes inspired by the movie including the night time view of the City of Lights from Linguini’s apartment.

And they can dine at a new restaurant called La Crêperie de Paris.

But these aren’t the only changes that Epcot has undergone for the 18-month celebration of Disney’s opening.

Last week, the park unveiled a new entrance and fountain and an exhibit called “The Soul of Jazz: An American Adventure” opened in February.