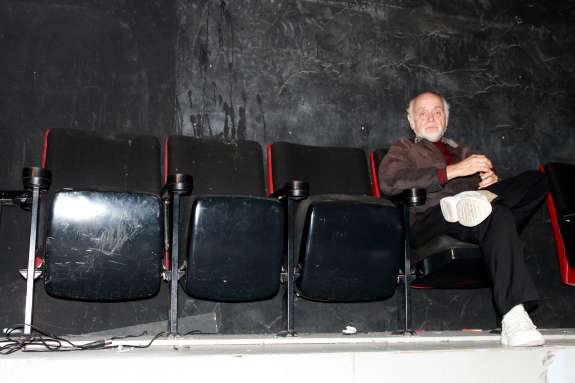 Owner Frank Hilgenberg sits on one of the few remaining seats as workers empty out the theatre. Photo: Nicole Creston

A beloved Orlando theatre where audiences have been entertained for 25 years is taking its final bow. By Saturday, January 31st, Theatre Downtown had to clear out of its longtime home on the corner of Orange Avenue and Princeton Street.

The theatre’s last show, “A Christmas Carol,” closed in late December. But a large group of performers and arts supporters gathered over the weekend with owners Frank and Fran Hilgenberg to celebrate a quarter-century’s worth of shows, memories, and lasting bonds forged in the footlights.

There was a special performance honoring the history of Theatre Downtown. There was music. There was laughter. And there were more than a few tears.

The Hilgenbergs reminded the crowd that the troupe known as Theatre Downtown would continue, although the landmark building that shared its name will no longer do so.

90.7’s Nicole Creston, a Theatre Downtown alum herself, was among the evening’s attendees. She walked the building and grounds with some fellow actors as they said their goodbyes to the emptying dressing room, lobby, and performance space. She sent this audio postcard from Theatre Downtown’s final night.