Remembering The Pulse Victims Six Months After The Shooting 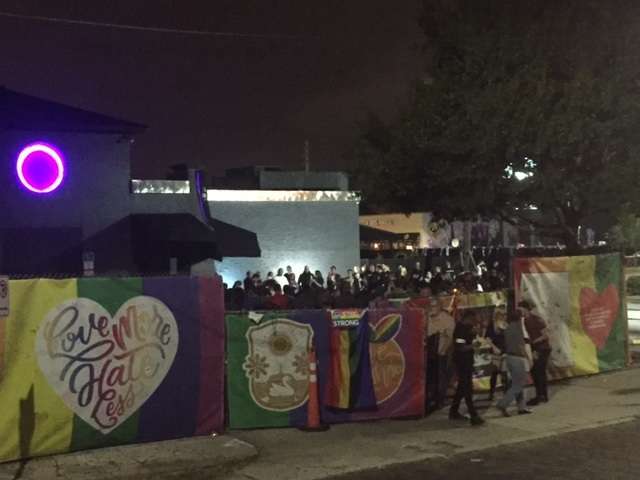 A small crowd gathered near the entrance of Pulse to remember the victims./Photo: Catherine Welch

At 2:02 am Monday, a small crowd gathered at the Pulse nightclub to mark six months since the mass shooting. The gathering was only for survivors, family and friends of those who died.

The fence around the nightclub, was covered with fresh flowers and banners. Inside the fence, near the club entrance, a small crowd gathered to read the names of the 49 victims and light a candle. The candles were aligned in the shape of the Pulse logo.

Richard Sizemore was there.

“The family members that were able to make it were there to light the candles for the people that passed,” said Sizemore, “then we just had a chance to quietly remember our friends.”

Lizzenie Cabassa-Rodriquez lost a childhood friend. “Just seeing his name and having to say it, it’s just really tough.”

Some who attended the gathering left immediately, others spent time looking at items left at the site.

The gay nightclub has been closed since the shooting. Its owner has vowed to turn it into a memorial.

The Orange County Regional History Center is holding an event at 5:30 pm.