Remembering Luis Vielma: “He Had Love For The Whole World” 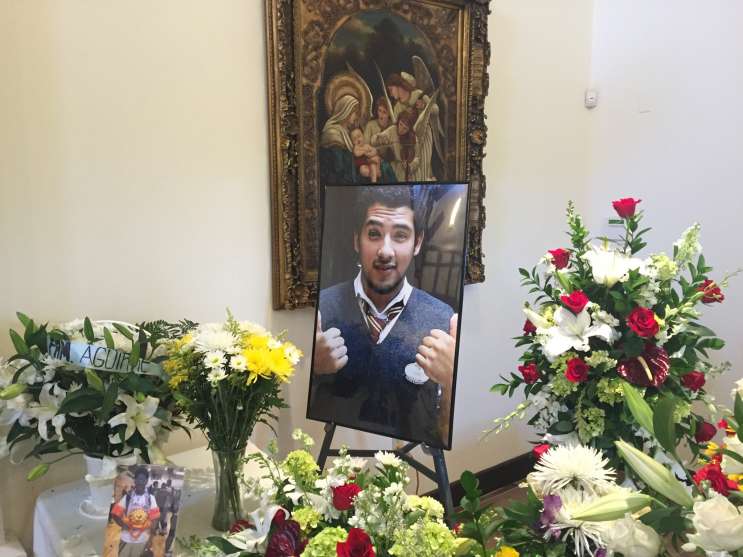 On Monday students at Seminole State College are putting up a memorial wall for the victims of the Pulse mass shooting. Luis S. Vielma was a student there. Over the weekend, family and friends mourned the loss of the 22 year-old at a funeral mass in Sanford.

Friends and family gathered at All Souls Catholic Church. Some dressed in black, others all in white. Maria Guadalupe walks up wearing a t-shirt with Vielma’s name and picture on it. She’s his aunt.

She said (in Spanish) that he grew up with her kids so she saw him as another son of hers and she’s always going to see him like that. Guadalupe said he left a great void in the hearts of those who loved him but she’s happy that he left behind many people who are going to keep on loving him a lot.

One of those people is Angelica Cadavid. “He was so special to me like words can’t describe how special he was to me,” said Cadavid. She said Vielma was one of her best friends at Seminole High School. She said he was her lunch buddy and helped her out when it came to her shyness.

She remembers the way he would playfully mess up her hair and then run away. Cadavid steps in to the church to say bye to her friend. Over at downtown historic Sanford, Angel Harkins is saying “hi” to every single person who passes by.

Harkins, who works at The Corner Café, calls herself “the Smile of Sanford.” She’s standing in front of a new memorial painting.

“You know, it’s love that helps this world go around and for the people that are not in the right head to go out and kill that many people and injured you know there’s something wrong there. But the victims and the families and the friends of everyone, we all feel that we’re a family and if you hurt one, you hurt all,” said Harkins.

Down the way from the memorial, Megan Naughton sits in a barber shop as her fiancé gets his haircut. She’d heard Vielma worked as an attendant on the Harry Potter and the Forbidden Journey ride at Universal.

“I heard that Universal did a beautiful tribute to him and I saw it on Facebook the other day they all lifted up their wands and yeah it was beautiful but I didn’t know that he was from Sanford; I had no idea,” said Naughton.

Harry Potter author J.K. Rowling tweeted about Luis, saying she can’t stop crying. Neither can his aunt, Maria Guadalupe. She said at work he would wear a badge letting people know he spoke Spanish so that he could help park-goers who didn’t speak English.

She said he was always there if someone couldn’t understand the language; he was always ready to translate for anyone and help with what he could… always.

The proceeds will help students in public safety and health care programs, in his honor.