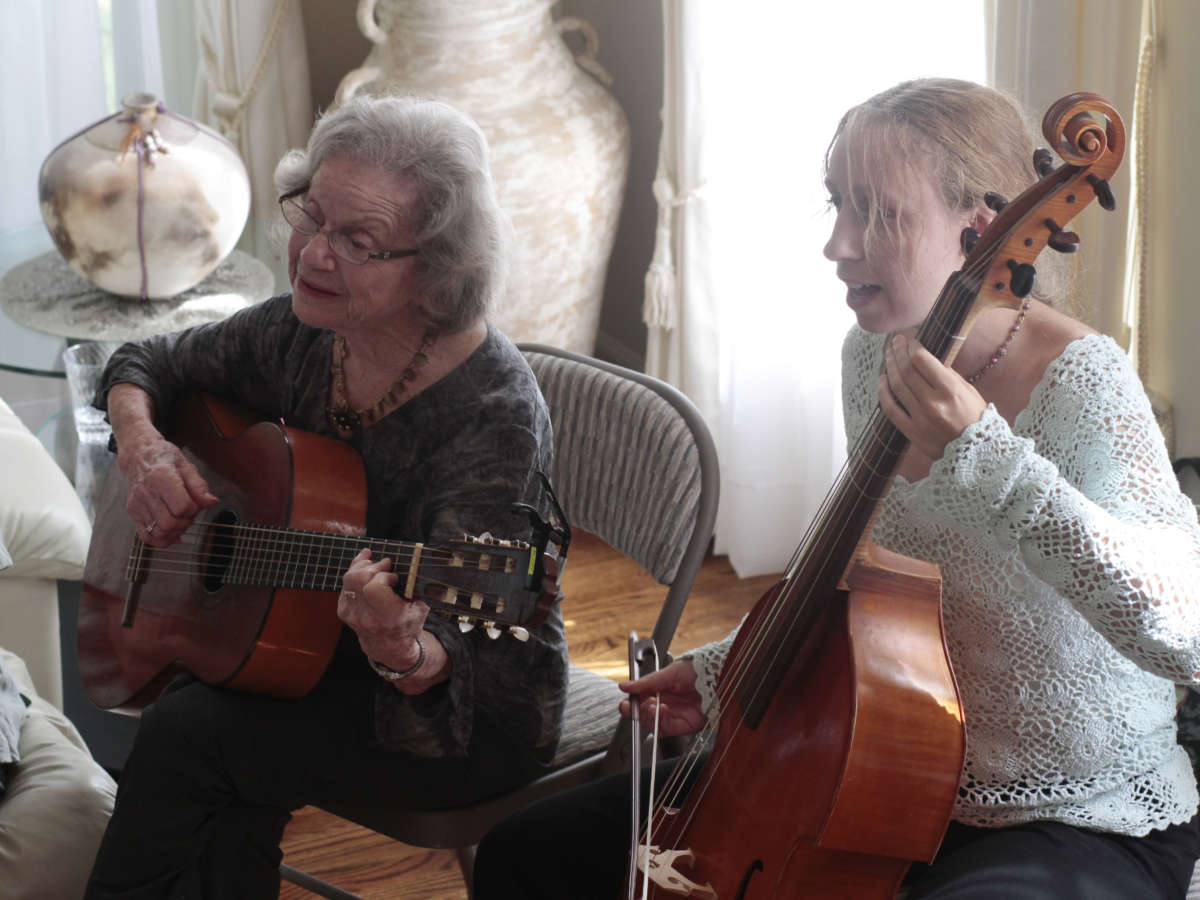 Singer, songwriter, guitarist and accordionist Flory Jagoda worked hard to preserve the music and language she inherited from her Sephardic Jewish ancestors in her adopted American home. Named a National Heritage Fellow by the National Endowment for the Arts in 2002, she died on Jan. 29 at age 97 in Alexandria, Va. at a long-term memory care facility, according to an obituary placed by her family.

Jagoda was best known for writing a Hanukkah song that became a favorite around the world: “Ocho Kandelikas.” That song has enjoyed many recordings and interpretations, including ones by Broadway belter Idina Menzel, Israeli singer Yasmin Levy and NPR’s own Ari Shapiro.

Behind that simple, catchy song is a story of war, generations of displacement and reclaimed identity.

Flory Jagoda was born in Sarajevo, where her family had lived for generations. They were descendants of Jews who expelled from Spain in 1492, who had first resettled in Istanbul, and later in and around Sarajevo. At home Jagoda spoke Ladino — the language of their Sephardic Jewish community — and learned music from her grandmother, with whom she lived as a child.

Some of the music was religious; other songs were secular, and in an urban Bosnian style called sevdalinka, such as the love song “Anderleto.” Jagoda excelled in the ornate ornamentation of that genre.

Jagoda was a teenager when World War II began. Her stepfather put her on a train to Italy under a false, Christian name, and told her to play her accordion as a distraction. She enchanted the conductor so much that he failed to ask for her ticket. Later, she was sure that the music had saved her life.

She fell in love with an American Jewish soldier, Harry Jagoda, and moved to the U.S. in 1946, where they raised their own family. Her mother and stepfather, who also had survived the Holocaust, followed two years later.

Decades later, she learned that most of her family in Bosnia had been murdered together, near their home in the town of Vlasenica. Her family was thrown into a mass grave — including her grandmother, her beloved nona.

“All of them, 42 people,” she told the U.S. Holocaust Memorial Museum in a 1995 oral history interview. “Nona, the daughters, the grandchildren, the babies — all of them. All the songs, the culture.”

In the United States, Jagoda performed and taught. Later, she mentored other musicians like Susan Gaeta. But for a long time, Gaeta says, there was no Sephardic music — or Ladino — in Jagoda’s life. Jagoda’s mother couldn’t bear to be reminded of the past.

“She didn’t want to sing a Sephardic song until her mother and father passed away,” Gaeta says.

But when Flory Jagoda decided to share her traditions again, there was no stopping her. Along with performing, she hosted regular gatherings of Ladino speakers whose families came from Bosnia, Greece, Bulgaria and Turkey. She also often quoted her nona, Gaeta recalls: “‘If you can’t put your soul into your music, don’t bother to sing at all.'”

As Jagoda told the U.S. Holocaust Memorial Museum, all the songs she wrote and performed — including “Ocho Kandelikas” — were for the family she had lost.

That was Flory Jagoda’s legacy.