Regardless of Fred’s Path, Flooding is a Likely Hazard This Weekend in Florida 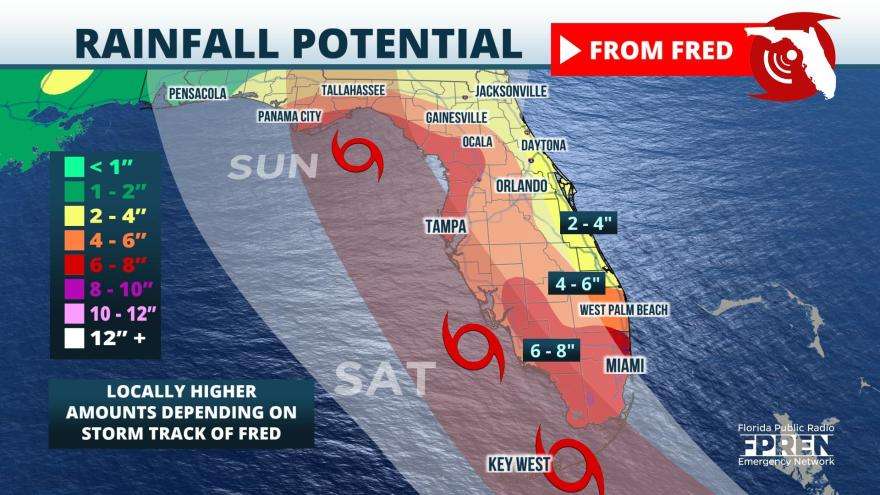 Update as of 11 am Thursday:

Hurricane hunter aircraft continues to report that Tropical Depression Fred is disorganized. This was an expected trend given the storm’s center moved over the mountainous island of Hispaniola Wednesday. However, there were no significant changes to the track or intensity forecasts for Fred. The primary hazard that will affect most Floridians is still likely to be heavy rain and flooding, and it is still too soon to determine specifics on any wind or surge impacts for coastal areas along the Gulf Coast.

As of 1100 am EDT Thursday, Tropical Depression Fred was located 80 miles W of Great Inagua Island and moving WNW at 14 mph. Maximum sustained winds were up to 35 mph, and the storm’s minimum central pressure was 1013 mb.

Forecast data is suggesting one of two possible scenarios might unfold once Fred moves away from the Greater Antilles and toward Florida Friday and Saturday. Wind and surge impacts could vary greatly in some places depending on which one comes to pass, but the greatest hazard to most Floridians will be heavy rain and potential flooding.

Fred weakened to a Tropical Depression Wednesday evening as it moved across the mountainous island of Hispaniola. The National Hurricane Center expects it to regain tropical storm strength again Friday as it parallels the northern coast of Cuba. The storm’s proximity to land and influences from upper-level steering winds will be key to its eventual path and intensity as it moves through the Straits of Florida Saturday.

The National Hurricane Center has repeatedly stated that confidence is “lower than normal” in the intensity and track forecasts for Tropical Depression Fred. References to the diverging models were made by Senior Hurricane Specialist Jack Bevin in his forecast discussion at 5 pm EDT Wednesday, stating the NHC’s forecast track is “between these extremes”. As a result, forecasters and emergency managers urge all Floridians to monitor Fred’s progress and stay informed of future updates until the magnitude, location and timing of potential impacts become clearer.

One possible scenario takes Fred on a more westerly route through the Florida Keys and several hundred miles into the eastern Gulf of Mexico. Several reliable forecast model simulations have begun to shift in this direction, which would allow Fred to spend more time over water and potentially in a slightly more favorable atmospheric environment for intensification. On this journey, Fred would most likely make a turn to the north late Sunday or Monday and have a greater chance of directly affecting portions of the Florida Panhandle with tropical storm conditions.

An alternative scenario to Tropical Depression Fred – which based on current model interpretations has about an equal chance of coming to pass – is that the storm’s center moves more north than west and spends more time near or over the Florida Peninsula. On this path, upper-level winds and the interactions with land would likely prevent Fred from intensifying as much, thereby mitigating overall surge and wind impacts to most Floridians. However, if this outcome manifests, heavy rainfall would be more widespread and potentially affect areas along the west coast that are more vulnerable to flooding due to recent heavy rainfall events.

Regardless of which path Fred takes into the Gulf of Mexico, and even irrespective of the storm’s intensity at the time, tropical storm force wind gusts, heavy rain, and localized flooding are all probable in the Florida Keys as early as Friday night. These hazards are also possible in portions of south and southwest Florida from Naples to Miami Saturday. Early forecast data suggests 4 to 6 inches of rain would be possible in these areas through Sunday.

Meteorologists at the Florida Public Radio Emergency Network will continue to provide updates on Tropical Depression Fred to your local NPR affiliate, in the mobile app Florida Storms, and on the @FloridaStorms social media accounts through the duration of the event.