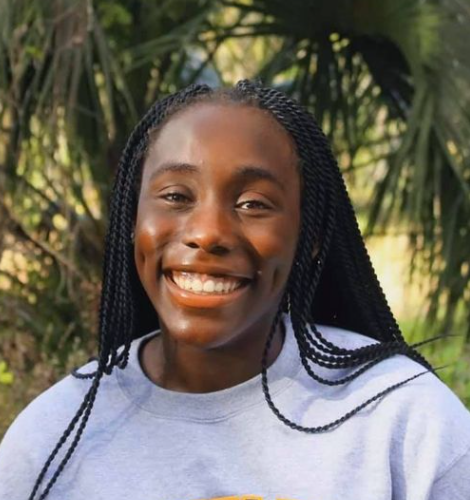 The U.S. Olympic trials are underway, with athletes from across the country competing for a spot on the U.S team. Seminole County high school graduate Stephanie Akakabota, talked with WMFE’s Talia Blake about qualifying for the 50 meter freestyle swim trials.

The following is an edited transcript of our conversation:

TALIA BLAKE: Stephanie, as a recent high school graduate, you’ve accomplished something many people will never do in their life. You recently competed in the U.S. Olympic swimming trials in Omaha, Nebraska. How did you do, and how do you feel about the performance you gave?

STEPHANIE AKAKABOTA: I went really close to best time. I was really happy with my results. There was definitely a lot of anxiety and nerves surrounding the swim meet. And as I talked to other swimmer, a lot of them were very stressed out because it’s such a big swim meet. But I’m really happy with how I did.

TALIA: The Olympics is the biggest stage for many sports. Can you describe what it was like being there? Take us inside the competition.

STEPHANIE: So the CHI Health Center in Nebraska is this really large facility which was used to build the pool. So it was built from scratch inside, the pool. And just from walking in, you can tell how professional the building and the whole event is because you have someone helping you each step along the way. You have mandatory COVID tests when you arrive. It’s a very huge facility. I got lost quite a few times. They have two pools. They have a warm down pool and they have the competition pool. The warm down pool, in itself is already a full size 50 meter and 25 meter pool, 25 yard pool. Going in there and seeing how well everything was set up, it really looks like it was made for television. It was definitely something that was made to be like a spectacle that they created there. And it was just amazing to watch and experience.

TALIA: You’ve been swimming competitively since your freshman year of high school. What interested you in the sport, and how did you get involved?

STEPHANIE: I started swimming competitively in high school. I joined my JV team my freshman year of high school. I didn’t really put much effort into swimming until the end of my ninth grade year and early 2018. When I saw the faster swimmers on the other side of the pool that were state level and national level competitors, and I thought to myself that I wanted to be like them. So, I asked my coach what I could do to get better. He gave me a step by step process, and I followed him through on that. And this is where I am now.

TALIA: And you’re not only an accomplished swimmer, but you play the piano so well that you’ve performed at Carnegie Hall. Does music help or a takeaway from your swimming?

STEPHANIE: Music definitely helps because both music and swimming are both very time based and very precision based. You have to be very accurate or things will be off or things will be wrong. So, I definitely think music helps my timekeeping in swimming. And music also complements my swimming by letting me unwind after a long day.

TALIA: You committed to the University of California, Berkeley for the fall. What are your plans while you’re in college? And will we see you again in four years?

STEPHANIE: So, my plan in college is to get to NCAAs and in three years, go back to Olympic Trials for 2024. I definitely will be there and I aim to be a really big contender there. I’m just so excited for the new journey ahead of me and to try an entirely new system. It kind of feels like I’m starting over like I did in 2018 and working my way up again. So I’m very, very excited for college.

TALIA: Well, I wish you all the best of luck, Stephanie in your future endeavors. And I hope to see you get the Olympics in four years.

Stephanie plans to study mechanical engineering in the fall at UC Berkeley. On the swim team she wants to add some NCAA championships to her belt while she prepares for the next Olympic trials.