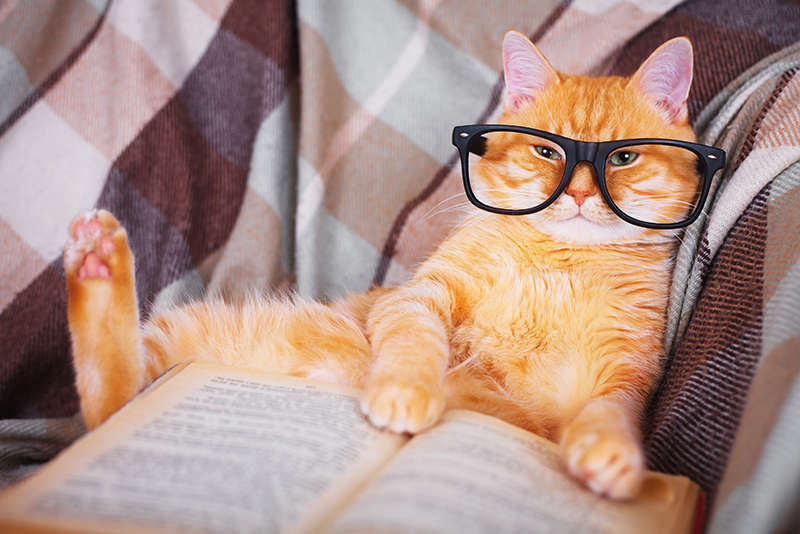 This is a cute orange cat in glasses lying on a sofa with a book. You're welcome.

We’ve pulled together a list of reading recommendations from WMFE’s staff for this time of social distancing.

Note: If you happen to purchase any of the books through the Amazon links below, WMFE will receive a portion of the proceeds to fund our programming. Learn more about supporting us while you shop or make a direct gift to support our work.

During this time, I have revisited some of my 2018 NPR book list favorites: Circe, Beneath a Ruthless Sun (from the author that Matthew Peddie interviewed on Intersection, Gilbert King) and Creative Quest. Looking forward to diving into American Pop, a new book from the NPR 2019 book recommendations that should be a bit more on the light and fluffy side.

Skink – No Surrender by Carl Hiaasen

A young adult novel that takes place in Hiaasen’s beloved Florida. Skink joins 14-year-old Richard on a breakneck chase across Florida, undaunted by lightning storms, poisonous snakes, flying bullets, and giant gators. There are a million places cousin Malley could be, a million unpleasant fates that might have befallen her, but one thing is certain: in the Florida swamp, justice is best served wild.

The Book Thief  by Markus Zusak

Liesel’s adoring adoptive father Hans teaches her to read, and from then on, words are her greatest power and source of escape. She begins to tell her own story and the stories of her family, neighbors and a young Jewish man they’re hiding as they struggle to survive in Nazi Germany. Death narrates this deeply reflective, funny and poignant novel. Also a movie starring Geoffrey Rush and Emily Watson.

Marji believes she is the last prophet of God and talks to Him about her daily life: the stories her Uncle Anoosh the revolutionary tells her, the parties her parents used to throw with their artist friends, and her desire to be the next Che Guevara. But after the Iranian Revolution, the life she knows changes forever. Her singular voice makes Satrapi’s black and white comics come alive. Also an animated movie.

The Hobbit by J.R.R. Tolkien

Hobbit Bilbo Baggins lives a simple, quiet life in the Shire before his friend, a wizard named Gandalf tricks him into a quest that will challenge everything he knows to be true about the world and himself. His charge? To reclaim a lost kingdom. Along the way, he befriends a band of dwarves, fights off goblins and wargs, and meets a creature changed by his greed for a mysterious ring. Also a series of movies starring Martin Freeman and Ian McKellan.

A gripping look at the inner workings of the decades-long effort to send a spacecraft to Pluto and beyond. You’ll fall in love with the spacecraft and the planet it visited. (Bonus: Stern joined Are We There Yet? to talk about the mission and the book).

The Ringed Planet: Cassini’s voyage of discovery at Saturn by Josh Colwell

Are We There Yet? regular and UCF planetary scientist Josh Colwell is offering his book about his work on the Cassini mission as a free download during the month of April. It’s an interesting look at the science and mystery within the rings of Saturn. (Trivia: Brendan’s dog Cassi is named after this mission — since she has a ring around her eye!)

Packing for Mars by Mary Roach

This hilarious and gross look at deep-space travel is a quick, entertaining read that’s packed with science. It makes you want to think twice about signing up for that trip to Mars (if you ever were in the first place).

Tales of the City by Armistead Maupin

If you watched Tales of the City, then read all the books. Armistead Maupin paints such wonderful vignettes of San Francisco and takes on wild journeys from Winnemucca to London. Mouse, Mary Anne, Brian, Mrs. Madrigal, Mona and all the others have become friends. Don’t miss Michael’s coming out letter to his life long Orlandian parents in the Anita Bryant era. It’s a classic.

Bill Johnson, WMFE’s production manager and weekend host, in the studio with his book choice, Sorcerer’s Screed. His wife made his mask.

This book of  “galdrastafir”, or “magical staves” was first published in 1940 in the annual Icelandic publication Jólagjöfin (Yule Present). The author himself, Skuggi – meaning Shadow in Icelandic (Jochum Magnús Eggertsson, 1896-1966), had handwritten the text and diagrams. This revised edition of the original publication features a cleaner look, with all symbols and runes redrawn by Arnar Fells Gunnarsson who designed the updated book. It’s always a good time to add magic and mystery to your life, especially through these vicissitudes.

An impossible read unless you’re a theologian but there are many verses and readings that are pertinent for these trying times. Psalm 91 is a good read now. 2 Timothy 1:7 is another. These will take a few seconds to read.

This book is my go-to feel-good book about traveling America in his mother’s Chevette. His storytelling will make you laugh out loud.

A Walk In The Woods by Bill Bryson

Another Bryson gem made into a movie starring Robert Redford. Bill and his old friend Stephen Katz decide to walk at least a portion of the Appalachian trail. The stories of who they meet along the way and the many predicaments are hilarious. The movie was good but the book even funnier.

Pillars of the Earth by Ken Follett

Pillars of the Earth is a historical novel by Welsh author Ken Follett published in 1989 about the building of a cathedral in the fictional town of Kingsbridge, England. The Wikipedia description is boring. The book is anything but! It’s a great story.

Note: If you happen to purchase any of the books through the Amazon links below, WMFE will receive a portion of the proceeds to fund our programming. Learn more about supporting us while you shop or make a direct gift to support our work.