Raw and Ardor: Mount Dora Center for the Arts 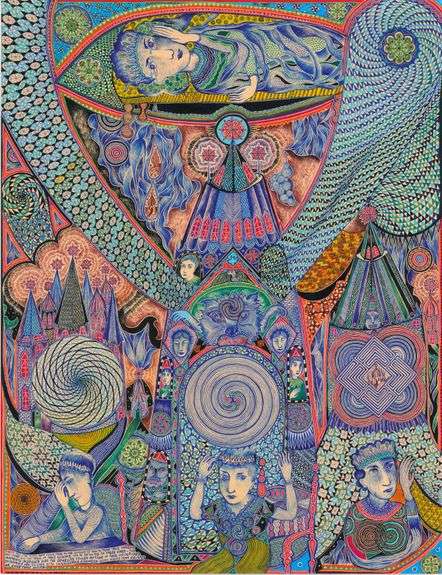 Justin Duerr, No One Remembers How To Think These Thoughts, Mt. Dora Center for the Arts

Outsider art: Is this a generous term that welcomes untrained artists? Or is it an othering label that belittles those without the privilege of a formal art education?

Sometimes this art is called “naive” or “visionary.” Visionary it often is, but naive it is not – it comes from the minds and hands of artists dealing with poverty, homelessness, and disabilities.

Providing art supplies and classes has long been recognized as a form of therapy, but some organizations go further than that. Coalition Ingénu, a nonprofit that relocated from Philadelphia to Lake Wales last year, has discovered huge talents among the artists it’s nurtured. And it acts for them much as a gallery would – organizing and promoting exhibits for artists who lack the resources to promote themselves, says founder Robert Bullock. The collective “grew from art classes at homeless shelters and mental health centers, but evolved into more of a social service organization.”

A show called Raw and Ardor currently at the Mount Dora Center for the Arts exhibits work by Coalition Ingénu artists and it’s funny, energetic and electrifying. David Kime calls the tiny beasts he sculpts from melted crayons and doll parts “pre-hysteric.” Justin Duerr’s intricate scrolls are scenes from an epic punk-rock narrative he’s been illustrating for decades.

This art articulates its makers’ inner visions in ways strange and raw and free, whatever you choose to call it. The show hangs in Mount Dora through July 28.