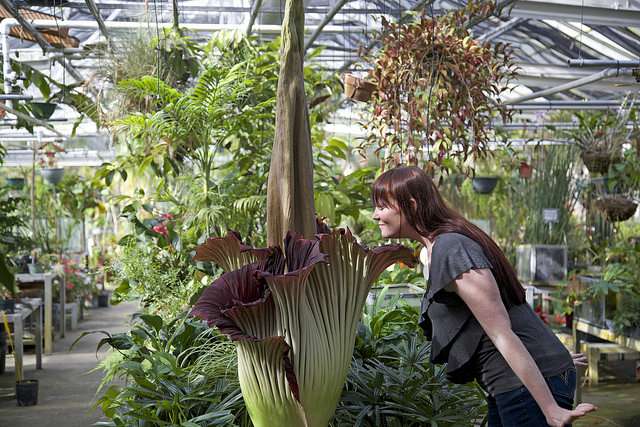 UPDATE 5/6/16: It’s in bloom! Here’s the latest story including hours for viewing. We want to see your corpse plant photos — tag WMFE in your posts!

In the next week or so, a rare corpse plant will bloom at Rollins College’s greenhouse. Corpse plants are popular for their stinky smell and only bloom once a decade.

Check out the live webcam here.

Greenhouse Manager Alan Chryst has been waiting patiently on this one for 12 years. He said it should start to open during the evening hours and will be the stinkiest between midnight and 4 a.m.

“Because in the native habitat of Sumatra that’s when the pollinators are out, which are carrion beetles and flies. They’re attracted to the smell of rotting meat and it’s very potent during those hours,” said Chryst.

This is the second corpse plant to bloom at Rollins. Another one bloomed last year. Chryst says his effort is all about propagating the species and bringing notoriety to Rollins.

“It produces the largest unbranched inflorescence in the world and because it’s so large and it produces from the spadix, it produces heat and steam to attract pollinators, so because of all that it takes a lot of energy for this plant to store,” said Chryst.

If you miss it, you’ll have to wait another seven years for a different corpse plant at the college to bloom.