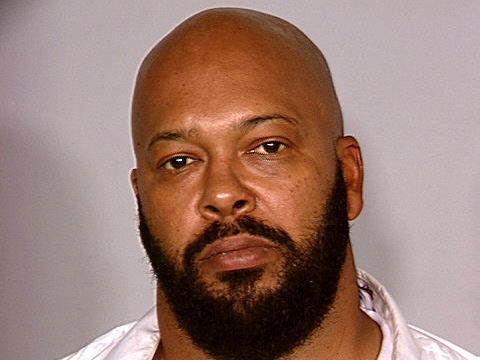 This photo released by the Las Vegas Metropolitan Police Department shows rap music mogul Marion "Suge" Knight after he was arrested in Aug. 2008, in Las Vegas.

NPR’s Nathan Rott reports that Knight is out of surgery, but there were no other immediate details of his condition.

The gunshots rang out at the 10AK nightclub about 1:30 a.m. Sunday, TMZ reports.

Quoting a source, the website says Knight, 49, was shot in the stomach and arm, “but walked out on his own power” and was placed in an ambulance. The Los Angeles County Sheriff’s Office says two others, a 32-year-old man and a 19-year-old woman, were also hit in the gunfire. The New York Daily News says they were transported to local hospitals and are expected to recover.

R&B Singer Chris Brown, who was reportedly hosting the party, was also shot at, but not hit, Hollywood Life says. TMZ says Brown may have been the intended target.

Knight was in the car with Tupac Shakur when the legendary rapper was shot and killed in 1996.