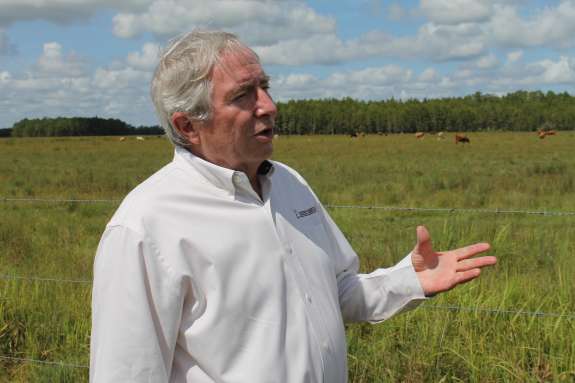 Don Whyte of Deseret Ranches envisions this pasture as the center of a Seminole County-sized urban corridor. Photo by Amy Green

On vast open space south of Orlando where cattle now graze Florida’s top landowner is proposing what would be the state’s largest development ever.

It would span nearly twice the size of Orlando on ranch land owned by the Mormon Church.

Don Whyte steps through wet ankle-deep grass. It had rained overnight, and beneath a bright morning sky the pasture is vibrant green, speckled with grazing cattle, brown and white.

“This is an area where it looks like the cattle have been weaned already.”

Whyte is vice president of planning at Deseret Ranches, among the nation’s largest cow-calf operations. The ranch spans the size of Manhattan in Brevard, Orange and Osceola counties. It also raises citrus and palm trees, but cattle is the ranch’s primary business.

“You’ll notice there aren’t any calves that are in that group. It’s all momma cattle getting ready for their next offspring in the year to come.”

Beyond the pasture a cypress stand looms, the only thing blocking the horizon.

“They seem to have moved over that way as we have come toward the pasture.”

Here cattle have grazed for more than a half-century. Now Whyte envisions this pasture as the heart of a new urban corridor, a business center sprouting mid-rise office buildings and fringed by smaller business centers and residential neighborhoods, all of it the size of Seminole County.

“It will be large, but Orlando is going to continue to be the center of the region, and I think we’ll see more intense development in downtown Orlando as well.”

In Florida where development is routine Deseret Ranches is leading an unprecedented effort to plan for growth well before the first strip mall is built.

The result is a growth plan extending to 2080 that considers the region’s expanding population, mass transportation, environmental conservation and agricultural preservation. It is the first time in Florida anyone has planned on such a scale.

Erik Jacobsen is Deseret Ranches’ general manager. He says ranch leaders decided eight years ago they needed to plan for the future.

“We realized that if we didn’t develop a long-term plan for the ranch that someone else would plan it for us.”

The way Jacobsen sees it rather than constructing a neighborhood here and shopping center there this is a unique opportunity to plan for growth on a massive level.

Whyte and I climb in his SUV and head out to Deer Park Road, which farther south intersects with U.S. Route 192. We pass cows gathered in the shade of palm trees, legs curled beneath them as they quietly munch grass.

Deseret Ranches is partnering with Osceola County on the plan. It anticipates 10 million central Floridians by 2080. Don Whyte says growth will be concentrated in southeast Orlando and Osceola County, near the Orlando International Airport and burgeoning Medical City.

Gov. Rick Scott ordered the plan as the state considers future transportation options in the region. But Whyte says the ranch had other reasons for the plan. When surrounding municipalities need additional resources often they look to the ranch.

“If I was an elected official I probably would want that to be as far removed as I could from where my voters were. And so they looked across the St. Johns River at a part of Brevard County that’s on the other side of the river, and low and behold it’s the ranch.”

Denser development supported by mass transportation is at the heart of the development rather than more of the car-clogged communities of central Florida today. Sixty percent of the land would be protected for conservation and agriculture. Construction would not begin before 2040.

Deseret Ranches is the flagship ranch of the Mormon Church, which also owns cattle operations in the Midwest and West. Jacobsen says the church considers them prudent financial investments, in keeping with its valued principle of self-reliance.

“So that you can provide for yourself if a rainy day comes, and so these are investments that can be drawn on as needed in the future.”

An alligator floats in a waterway surrounding an island full of birds.

“Oh look there’s another alligator. Now that one is huge isn’t he? He looks like he could leave a wake.”

This land will be preserved because the development would claim only part of Deseret Ranches, leaving untouched swaths that include the headwaters of the St. Johns River and this bird rookery, where each spring Don Whyte comes to depend on hundreds of egrets, ibis and roseate spoonbills returning to nest.

“It’s the kind of thing that would be preserved forever on the ranch.”

Environmentalists are watching closely. Charles Lee of Audubon of Florida worries neighboring landowners to the south will want to develop their land, too, endangering the Everglades’ headwaters.

The state completed a review of the growth plan in July, ordering minor changes. Deseret Ranches and county planners will present the changes to the Osceola County commission Monday. It is possible the state could finalize the plan by the end of the year.