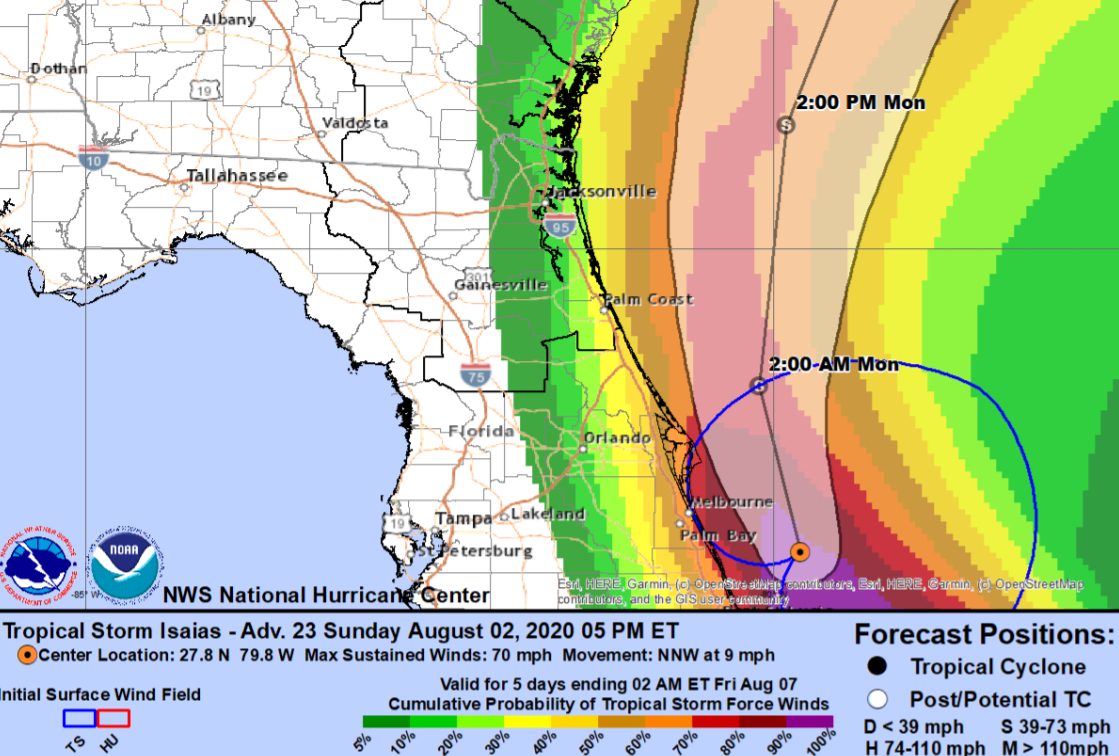 The National Hurricane Center forecasts a high probability of tropical storm force winds -- sustained winds of at least 39 mph -- along the coast of of Brevard County.

At 11 p.m. Sunday, Tropical Storm Isaías was 50 miles east of Cape Canaveral and was headed toward the South Carolina coast.

Its maximum sustained winds were 70 mph as it moved north northwest at 9 mph.

The National Weather Service predicts it could be near hurricane strength when it reaches South Carolina Monday night.

A tropical storm warning was in effect Sunday night for Brevard County and the coast of Volusia County, according to the National Weather Service.

The highest winds were along the barrier islands, with heavy rain and gusty wind pushing onshore.

The storm was 55 miles south-southeast of Cape Canaveral and was moving at 9 mph with maximum sustained winds of 70 mph.

According to the National Weather Service, conditions are expected to worsen through the evening for the Space Coast and Volusia County, especially along the barrier islands.

Peak winds of 40 to 50 mph, and gusts up to 65 mph, are forecast for eastern Volusia and Brevard counties. A lake wind advisory — with winds of 15 to 25 mph, and gust up to 45 mph — are in effect for western Volusia, Seminole, Orange, Osceola and Okeechobee counties.

A tropical storm warning is in effect for the Sebastian Inlet in Florida to Ocracoke Inlet in North Carolina.

5 p.m. update: Isaías strengthens slightly as it continues its trek along the coast

Maximum sustained winds for Tropical Storm Isaías have strengthened to near 70 mph according to the National Hurricane Center.

The storm is moving north northwest at 9 mph and is forecast to turn toward the north and increase its forward speed on Monday and Tuesday.

The forecast track of Isaías has the center of the storm passing just to the east of the Florida east coast through tonight.

Isaías is expected to be a strong tropical storm wen it reaches the coast of South Carolina Monday night.

Tropical storm force winds extend outward up to 115 miles from the center. A weather station at Sebastian Inlet, Florida, recently measured a wind gust of 49 mph.

A Tropical Storm Warning is in effect for

A Tropical Storm Watch is in effect for

The Tropical Storm Warning south of Jupiter Inlet Florida and for Lake Okeechobee has been discontinued.

The Storm Surge Watch for the Florida east coast has been discontinued.

Brevard County closes storm shelter due to lack of turnout

Brevard County has closed the storm shelter it open earlier today. Only one resident requested assistance.

The shelter at Viera Community Center opened at 11 a.m.

The county announced shortly before 4 p.m. that it had been closed due to lack of turnout.

“In the meantime, the threat of the potential impact from Tropical Storm Isaías has continued to diminish,” county officials said on Twitter.

FPL has some 10,000 workers positioned along the coast to restore power outages from the storm.

As of 2 p.m. Sunday, FPL had restored power to  240 customers in Brevard County, with 260 customers out.

Duke Energy was reporting 888 customers without power in the Orlando Metro area.

Tropical storm conditions are expected east of and along the I-95 corridor as Isaías slides up the coast.

Volusia County closes all but one shelter

Volusia county has closed three of its public shelters as the storm remains mostly offshore.

The shelter at Galaxy Middle School in Deltona remains open to accommodate general and special needs populations and residents who can’t remain in their current residence and have no other place to go.

Volusia County has closed three of its public shelters. The shelter at Galaxy Middle School in Deltona remains open to accommodate general and special needs populations – residents who can’t remain in their current residence and have no other place to go. pic.twitter.com/ds298e4oBb

The first astronauts to ride a SpaceX capsule into orbit are headed toward a splashdown Sunday in the Gulf of Mexico to close out their two-month test flight. It will be the first splashdown in 45 years for NASA astronauts and the first return in the gulf.

Florida’s Atlantic coast is starting to see the effects of Tropical Storm Isaias. But waves and wind are calm near Pensacola in the Florida Panhandle.

Test pilots Doug Hurley and Bob Behnken departed the International Space Station on Saturday night. They awoke to a recording of their young children urging them to “rise and shine.”

Isaías is still a tropical storm with top sustained winds of 65 miles per hour. The storm is about 120 miles SSW of Cape Canaveral, moving NNW at 8 mph.

Tropical storm warnings continue for the Space Coast and the First Coast.

Bands of rain will continue to impact Central Florida this afternoon and tonight with tropical storm wind gusts as far inland as I-95 and rainfall of 2-4 in.

Florida Power and Light Company has pre-positioned a power restoration workforce of more than 10,000 workers from over 20 states to help restore any power loss due to Tropical Storm Isaías.

“Now restoration is going to follow the path of the storm, as it continues to move up the coast. And as it does so we’ll be out assessing damage, and restoring power,”  said FPL’s Dave Reuter

He’s reminding residents to run generators outside and use caution when driving near utility trucks on roadways.

FPL has restored power to about 20,000 customers so far.

Storm surge warnings have been discontinued for the East Coast of Florida. Tropical Storm Warnings are still in place for the east coast north of Jupiter Inlet.

Meteorologists with the Florida Public Radio Emergency Network say the worst impacts from Isaías should stay offshore, although tropical storm conditions are still expected along the east coast from West Palm Beach to St. Augustine.

Confidence is increasing that the worst of #Isaias will stay just offshore. However, tropical storm conditions still expected along/east of I-95 from West Palm Beach to St. Augustine later today and tonight. #flwx

Tropical Storm Isaias is expected to move along the Florida Atlantic coast today from Palm Beach county northward toward the Space Coast today and tonight with tropical storm force winds, locally heavy rain, and rough seas. The Tropical Storm is expected to be at its closest approach to the First Coast late Sunday night and Monday morning before departing for the Carolinas. Conditions are expected to gradually improve late Monday afternoon and evening.

Isaias weakened slightly more overnight; top sustained winds are near 65 mph as of the early Sunday morning advisory from the National Hurricane Center. Hurricane Warnings have been changed to Tropical Storm Warnings from Hallandale Beach northward along the Florida east coast. Inland Tropical Storm Warnings are also in effect from Palm Beach county north to the Orlando and Jacksonville metropolitan areas. Occasional tropical storm force winds are likely in the warning areas as bands develop and move inland Sunday into Sunday night.

Storm Surge Watches continue from St. Augustine southward, where 2 to 4 feet of water are possible in areas of typically dry land somewhere within the watch area. The times of high tide are around sunrise and sunset, which is when the inundation is most likely to occur.

Areas farther west outside of the tropical storm warning area may also see occasional rain bands later today and into Monday morning; however, wind gusts are forecast to stay between 15 and 30 mph.

Isaias remains a tropical storm off the coast of Florida Sunday morning. As of 8 a.m. the storm was 155 miles south south east of Cape Canaveral, moving northwest at eight miles per hour.

“Those rain bands will continue to move toward the west and they’ll enter parts of orange and Seminole counties between nine and 11 o’clock this morning and also into the northern parts of Osceola County,” said Hawthorne.

Hawthorne said occasional tropical storm force wind gusts are expected with conditions gradually deteriorating on the Space Coast later this afternoon into tonight as the storm tracks north-northwestward right along the east coast of Florida.

Brevard County has locked down Mather’s Bridge on Merritt Island in the vehicle only traffic position, to prevent damage that could result from high winds.

The center of the storm is expected to pass over Merritt Island tonight.

8/2/20 8:25AM | The center of #Isaias is now off the coast of Palm Beach County.
In ECFL, outer bands are moving onshore into Volusia and northern Brevard counties. Brief moderate to heavy downpours and wind gusts up to 50 mph will be possible through 11am. pic.twitter.com/gUDgQ8nkTs

As of 8 a.m. this morning, some shelters in Volusia County are open.

Deland High and Volusia County Fairgrounds are open for the general population.

And Galaxy Middle and Freedom Elementary are open as special needs shelters.

Votran is providing transportation to the shelters.

The county is encouraging residents to shelter in place if possible due to the coronavirus pandemic. Face coverings are mandatory and shelter staff will carry out a wellness check on people before they enter.

During a news briefing Saturday, he said tropical storm force winds could still turn off the lights.

“Certainly a 70 mile an hour wind will be enough to take down trees and limbs. That obviously interacts power lines, so, so that will happen”.

DeSantis says folks should have seven days of food, water and medicine on hand.