Racked With Guilt, Some COVID-19 Survivors Are Asking, ‘Why Me?’ 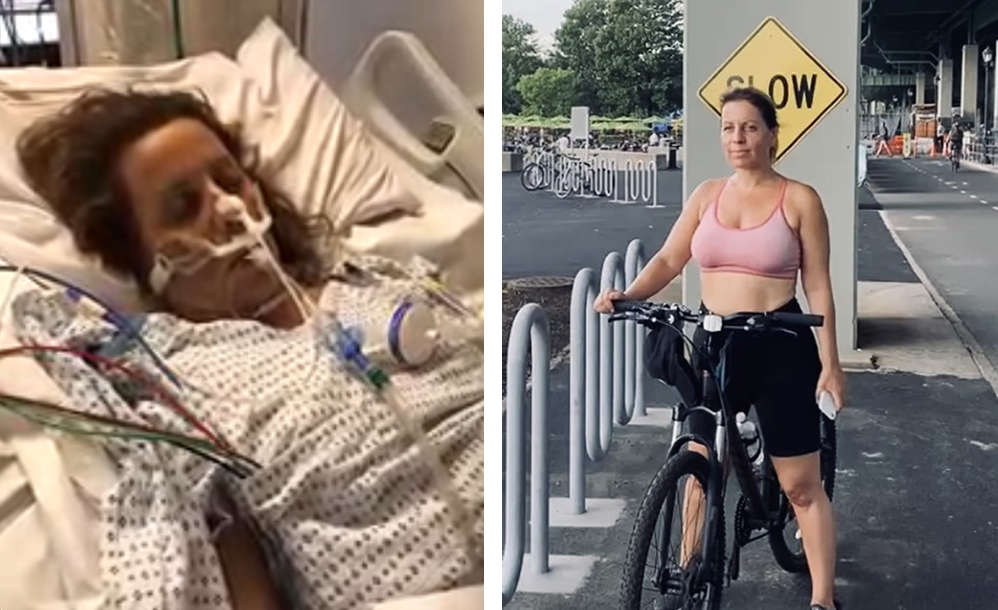 Left: In April 2020 Debbie Kosta was on a ventilator for almost a month. Right: "I'm pushing through this COVID long-hauler disease by biking each day," says Kosta. "Going from learning how to walk again to learning how to bike again took me a few months. Now I bike 24 miles up and down the Hudson."

Debbie Kosta almost didn’t survive COVID-19. In the early days of the pandemic, the 52-year-old was kept on a ventilator for over three weeks.

When she emerged from a coma and learned that she would pull through while another person in the hospital with her had died, Kosta was racked with guilt. She found herself asking, “Why me?”

Her feelings — self-blame, anxiety, helplessness — are just some of the symptoms experienced by people with survivor’s guilt.

Survivor’s guilt is typically associated with soldiers or first responders who survive a traumatic event that others did not. Now, after over 600,000 people died of COVID-19 in the U.S., survivors of the disease are asking themselves similar questions.

What survivor’s guilt looks like for three COVID-19 survivors

While Kosta was hospitalized in New York City, the single parent of two pleaded with doctors to do all they could to keep her alive.

“I was in the hospital for a month because I couldn’t breathe, and they gave me one respirator after another. I was on a ventilator for 26 days and I nearly died three times in ICU.

There was this one man in the ER when I had entered. And I remembered there was also an old woman. I searched later to find, you know, what happened to these people. The old lady made it. The man did not make it. It’s a feeling of, “Wow, we were in here together. Did I take away from that?”

The way I deal with it … I say to myself, “OK, you know what? I’m alive. They’re not.” Going to get back to walking again, then slowly, slowly walk a block, walk a block more, walk a block more after that — “This one’s for you. This one’s for you.” So, it’s like my health is dedicated to them.
Rachael Sunshine, 44, from Coxsackie, N.Y., is a veteran who struggles with debilitating symptoms from chronic Lyme disease and an advanced stage of reflex sympathetic dystrophy. When she contracted COVID-19, she knew the odds were stacked against her.

She’s now recovering, but the disease has aggravated her existing heart complications and other health issues. She and Kosta are both part of Survivor Corps, a national network that supports COVID-19 survivors, which Sunshine says has helped her stay positive.

Some people are asking, “Why do you feel guilty about surviving?” Well, when you’ve been through a lot and you’re in a population that statistically was not supposed to survive, you do feel a little bit guilty about that.

Linda Lausell-Bryant, 58, a social worker and clinical professor at New York University, came down with the disease along with her husband in the early days of the pandemic. Her husband had to be hospitalized while she remained mostly asymptomatic. They’re both doing better now.

Linda says they were not surprised to see how the coronavirus ravaged communities of color. That realization contributed to her overall sense of guilt.

My husband and I are both people of color. But we were in a different income bracket and we had a really good health insurance plan that many, many other people of color did not have access to. And that felt even worse because of the allegiance we have to people of our community of color, and yet we were privileged in a way that many others were not.

That was hard, also, given that we are people who are trying to fight for that equity and fight for justice. And yet while our local hospitals were a mess, we had a colleague who knew someone at another hospital, and my husband was able to get high-quality care.

What we are trying to do is focus on gratitude for the way things worked out and to try to recommit to advocating that in these kinds of situations, we really should work towards becoming a society that does better by all people.

Guilt is how some cope with loss and powerlessness

Abigail Nathanson, a social worker who works with people with survivor’s guilt, says that guilt can give people a false sense of control in the wake of senseless events that leave survivors feeling helpless.

The thinking, she explains, is “I am not powerless if it was my fault, and I made a mistake.”

She says the first step is to accept the grief underneath that guilt. “Acknowledge the feelings of loss and powerlessness,” she says.

When people feel this sort of emotional response to stress, Nathanson says, it’s important for them to have compassion for themselves and what they’re going through.

“It makes sense that it would be so challenging and so dysregulating to try to navigate a world that got turned upside down seemingly overnight,” Nathanson said.

She hopes that people are able to find faith in their own resilience and ability to figure out how they want to come out of a difficult experience.