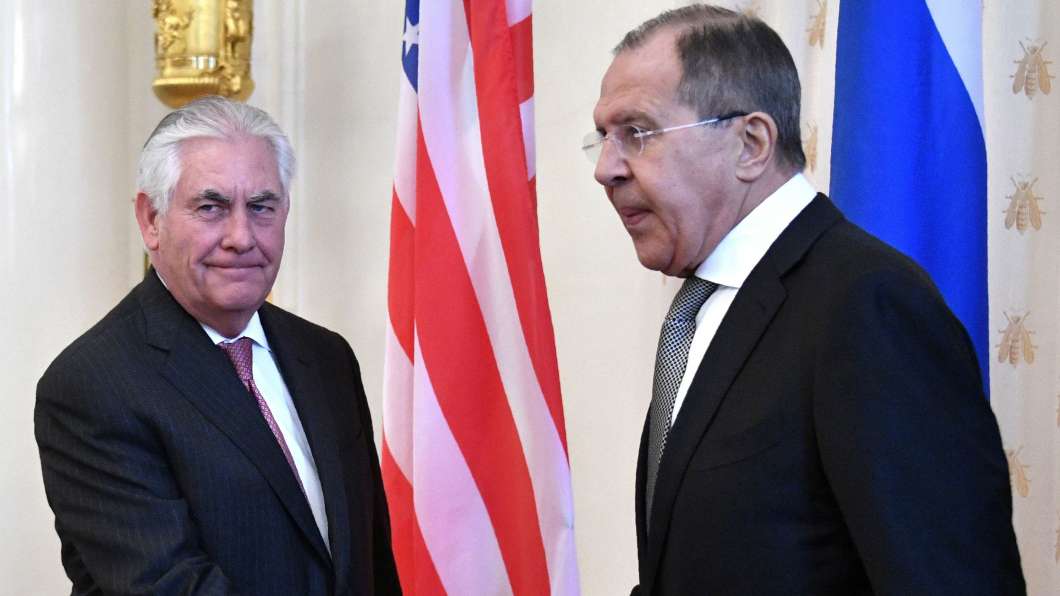 Secretary of State Rex Tillerson shakes hands with Russian Foreign Minister Sergey Lavrov at the start of their meeting in Moscow. Russia has accused the U.S. of breaking international law with its missile strike on Syria last week.
Image credit: Alexander Nemenov

Russian President Vladimir Putin met with Secretary of State Rex Tillerson in Moscow Wednesday, ending speculation over a potential snub. The meeting came as Russia and the U.S. have traded accusations over their involvement in Syria, Russia’s ally that was recently hit by an American missile strike.

Few details about the meeting are available; presidential spokesman Dmitry Peskov stated only that Putin had received Tillerson and Foreign Minister Sergey Lavrov at the Kremlin after the diplomats’ meetings earlier Wednesday, according to a pool report and state-run Tass media.

It’s not the first meeting for Putin and Tillerson, a former oil executive who led Exxon Mobil’s operations in Russia and received the Order of Friendship from Putin, as NPR’s Colin Dwyer has reported for the Two-Way.

In addition to Syria, the talks between U.S. and Russia are expected to center on North Korea, as the countries’ top diplomats try to repair a relationship that Putin says has only worsened in recent months.

Tillerson has demanded that Russia end its support of the Syrian regime following the April 4 chemical weapons attack in the town of Khan Shaykhun. The U.S. says Syrian President Bashar Assad’s government carried out the attack, and it accuses Russia of trying to deflect blame from Assad.

Days after that attack, President Trump ordered a cruise missile strike that targeted a Syrian air base — a strike that Russia says violated international law. Moscow has accused the U.S. of using the chemical weapons attack as a pretext for hitting the Syrian base with Tomahawk missiles.

NPR’s Lucian Kim reports that Lavrov went into talks “warning that the U.S. not repeat strikes against Syrian government forces.”

“Most recently, we saw rather alarming steps, when an unlawful attack against Syria was carried out,” Lavrov said, according to Tass. “Russia’s leadership has already voiced its principal assessments in this respect. We believe it is of principal importance to prevent risks of a repeat of such steps in the future.”

“The Kremlin argues Assad gave up his chemical weapons stores under a 2013 agreement Moscow brokered with the Obama administration; Tillerson has accused Russia of ‘incompetence’ in failing to enforce that deal,” Charles Maynes reports for NPR from Moscow.

In his opening remarks, Tillerson said he was looking forward to “an open, candid, frank exchange” with Lavrov.

“Our meetings today come at an important moment in the relationship,” Tillerson said as he and Lavrov faced each other at a long conference table, “so that we can further clarify areas of common objectives, areas of common interests, even when our tactical approaches might be different, and to clarify areas of sharp difference, so that we can better understand why these differences exist, and what the prospects for narrowing those differences may be.”

Those differences seemed evident when the two top diplomats shook hands to kick off today’s session. Making little to no eye contact, Tillerson and Lavrov gripped hands and wore expressions that ranged mainly from grim to flat before a phalanx of photographers.

The Interfax news agency quotes Putin as saying that the relationship between Russia and the U.S. has deteriorated rather than improved under President Trump’s administration.