This Plant Stinks, And People Can’t Get Enough Of It 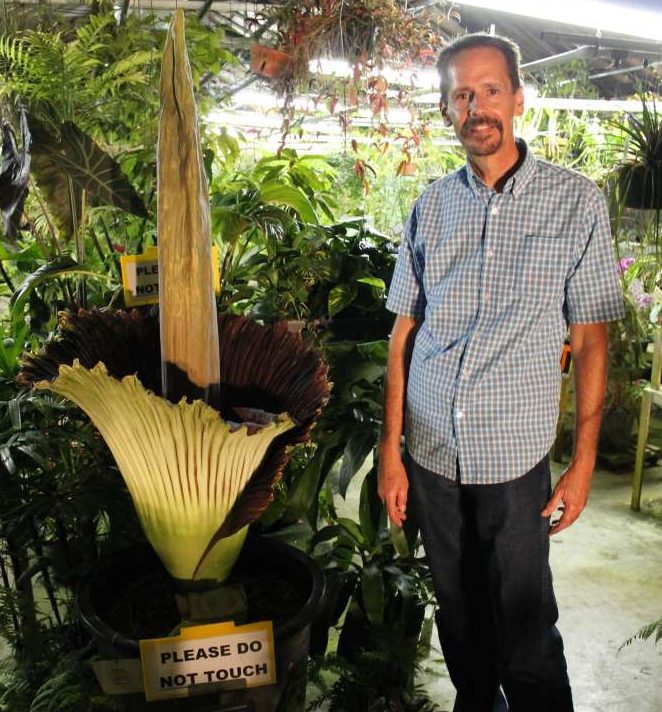 "I’ve been nurturing it for 12 years, and this is the results of it," says Alan Chryst. Photo: Matthew Peddie / WMFE

A pungent plant at Rollins College in Winter Park is a hit with visitors…and a social media sensation.

The college greenhouse was open until 2 a.m. for people to see and smell the plant.

Brandy Fransen was surprised by just how bad it smelled.

“So pungent,” said Fransen. “If you stick your head in it, it’s strong. But I don’t recommend doing it unless you want to get the full essence of what it smells like.”

“If you’ve ever been driving in the middle of Florida summer, and you come across a roadkill that’s been there for several days,” said greenhouse manager Alan Chryst.

The corpse plant, officially named Amorphophallus titanum or titan arum, grows in the Sumatran rain forest where its powerful smell attracts carrion beetles and flies to pollinate the plant.

The flower is five feet tall, but it blooms for only about 36 hours before collapsing and it only blooms once every decade.

“I obtained one for personal reasons because I wanted to see one in person, and now I want to share it with as many people as I can,” said Chryst. “It’s very exciting. You could almost think of it as my child. I’ve been nurturing it for 12 years, and this is the results of it.”