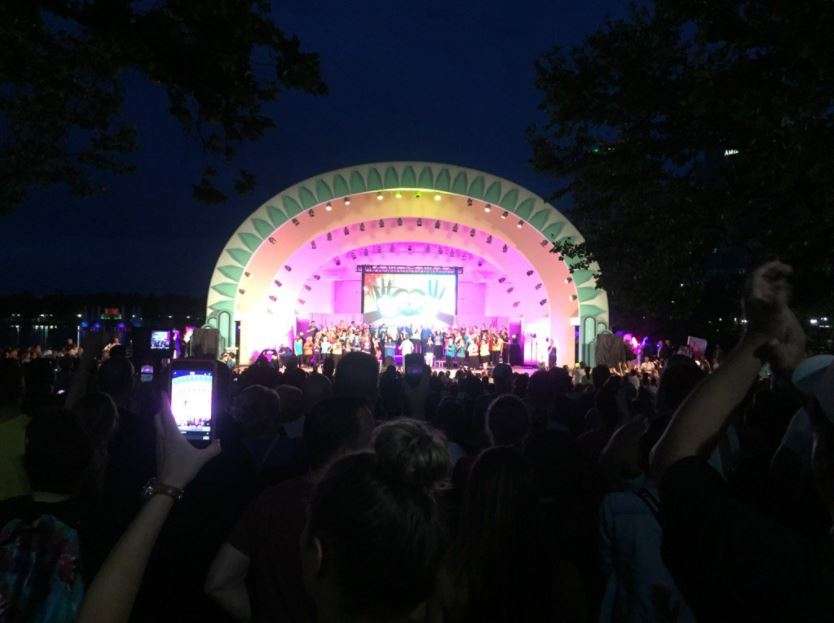 A Pulse remembrance ceremony drew thousands of people to Lake Eola in downtown Orlando on Monday night. Among them were survivors of the shooting, as well as their loved ones. The families and friends of the forty nine people who were killed also took part in the vigil, many traveling from Puerto Rico, Venezuela, and across the United States.

The vigil lasted more than two hours and featured prominent local community voices. Puerto Rican Grammy award-winning artist Olga Tanon is one of many performers who brought life to the stage.

The ceremony was one of several events planned for Orlando United Day; the idea behind them being for people to show kindness and love to each other.

“It can’t be frozen in time around this tragedy,” said Orlando Mayor Buddy Dyer of the need for mutual respect and understanding among residents. “It can’t be something that our community only talks about when we mark the time since Pulse. It has to be a living, every growing ideal. ”

Courtney Boyson wore a hand made t-shirt, with the words “Hate Will Never Win” printed on the front. She had painted a pair of Keds in rainbow colors, lettered with the words one pulse. Boyson knew some of the people who were at Pulse that night.

“The least I can do is show my representation of my love to them every single day, from head to toe. They deserve the recognition,” she said.

Joseph Jeffries and his partner Jeffrey Moll wore rainbow ribbons pinned to their shirts. Jeffries said the last twelve months have shown just how tight-knit the community is.

“It’s in the sense that it’s shown its strength and its might to the face of the earth, I think it’s changed, yeah. Not putting up with any fear or hatred,” he said.

The ceremony featured a massive group hug. At the end, candles were lit as the names of the 49 shooting victims were read.