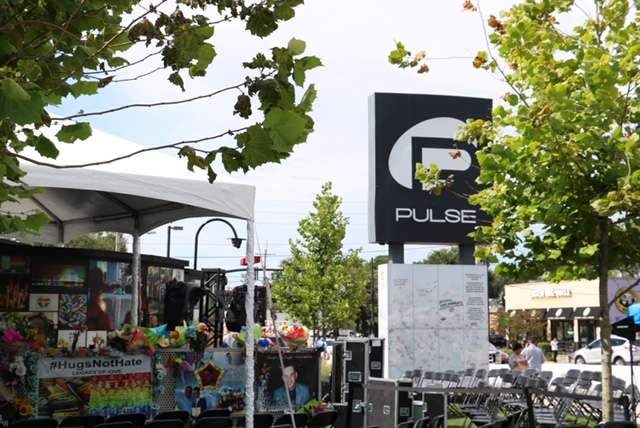 The remembrance ceremony at Pulse on Wednesday marked three years since the mass shooting that left 49 dead.

The ceremony capped events that have taken place throughout the community in recent days looking back at the massacre at the gay nightclub.

Elijah Owens was at Pulse Wednesday afternoon, where a temporary memorial is in place while plans for a permanent memorial continue. He remarked at the small crowd of visitors.

“It’s definitely a more intimate affair than it was three years ago, and in some ways it makes it more special that there’s this sense of community around it. And it’s also a bit of a bummer that it’s not as much in the public eye, and it’s not a conversation that’s happening as much because it’s an important conversation.”

Owens, who is bisexual, says the hate behind the Pulse attack is still a problem that needs attention. “I feel that isn’t still talked about as much because I think a lot of people who are not a part of that think, ‘Oh, gay marriage was legalized. Open and closed book.’ But it’s not because there’s still issues with it.”

According to the American Psychological Association, the annual observance of a traumatic event can cause a recurrence of the thoughts and feelings from the event. Survivors of the Pulse shooting may be experiencing a heightened sense of anxiety and fear around this time.

But there are resources for those who need help. The Orlando United Assistance Center offers support and resources specifically for those impacted by the Pulse tragedy. Call 407-500-HOPE or visit their website for more information.

In the wake of the Pulse nightclub shooting, the LGBTQ+ Center in Orlando opened its doors and became a hub for the community. The Center’s Executive Director George Wallace said counselors will be available for walk-in appointments Wednesday and Thursday at The Center’s Orlando and Kissimmee locations.

“If you just need a space to go, or a place that is safe, you are more than welcome to come and hang out at The Center,” Wallace said. “We have counselors available. If you notice signs of depression: being lethargic, being tired, just not feeling yourself … then we’re there to help.”

David Moran was making plans with friends to go out June 12, 2016 – and Pulse was one of the placed they were thinking of going.

“We were thinking about going out, and I was having car trouble. So I ended up just going home, but we had discussed possibly going to Pulse,” Moran said. “I think like many people, I received a text and also a tag on Facebook.”

He said it’s difficult to talk about how the shooting affected him when others lost their lives or were physically injured.

“The trauma is real, regardless of how you term it. And I would say it doesn’t negate what someone has gone through as far as physical harm, or mental, or trauma,” Moran said. He joined the Gays Against Guns group, which formed after the Pulse shooting to advocate for stricter gun control laws.

Ricardo Negron had a similar reaction to the shooting. Negron was at Pulse nightclub when the shooting started three years ago today. Outside the Orange County Supervisor of Elections office earlier this week, Negron was one of the activists highlighting a constitutional amendment to restrict the sale of firearms like the rifle used in the Pulse shooting.

That amendment has gotten more than 100,000 signatures – enough to trigger a Florida Supreme Court review.

“I can only hope that by sharing my story, I can reach the mind of folks and change their perceptions on what kind of weapon should or should not be allowed,” Negron said.

But the shooting also spurred some in the LGBTQ community to advocate firearms as a means of self defense. Erin Palette is a transgender woman living in Daytona Beach.

After the Pulse shooting, she founded a group to advocate for LGBT gun ownership and education.

“And really, the reactions from other people are what started Operation Blazing Sword,” Palette said. “Because I saw this wonderful outpouring of love and assistance from gun owners.”