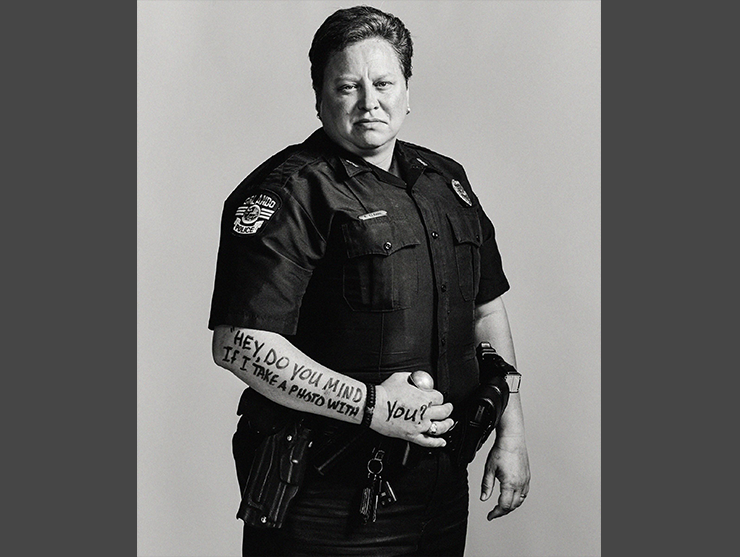 Orlando Police Department Officer Alison Clarke posed for a Dear World project in 2017 that featured portraits of people affected by the shooting at Pulse in 2016.

In January of 2017, Officer Alison Clarke was racing toward an Orlando Walmart. Her supervisor Debra Clayton had asked for backup while she was pursuing a man wanted for murder.

“I had just started southbound when she came up on the air and you could hear the gunshots in the background,” Clarke told WMFE in 2018. “She was my sergeant. I needed to be by her side and help her. So I must have dropped the crime scene tape and ran over and bent down and held her hand and tapped her leg and talked to her and told her that we were here and she was gonna be OK.”

Clayton was pronounced dead later that morning. Now, Clarke has nearly textbook post-traumatic stress disorder. She was already working through PTSD from the Pulse nightclub shooting when Debra Clayton died.

The next time she had to draw her gun, she couldn’t calm herself down afterwards. The department let her go on light duty so she could go into a more intensive PTSD treatment program.

“Deputy Chief Rolon said timetable’s on me,” Clarke said. “Whenever I’m ready to put a uniform back on and go back to work, I’ll be transferred to the airport and I’ll finish my career working at the airport.”

But when Orlando Rolon was promoted to police chief later in 2018, he eliminated permanent light duty. This is where injured officers can keep working a desk job indefinitely. On average, 25 to 30 officers per month are on light duty.

So now, Clarke will be fired on Friday, November 8.

Rolon and Orlando Mayor Buddy Dyer declined interview requests for this story. But in a joint statement, they said Clarke stepped up on the night of Pulse and “bravely carried out her duties to help us further protect our Orlando community against horrific acts of violence.”

The department said it will continue to support her. The department has also said eliminating permanent light duty will put more officers on the streets patrolling.

Clarke is applying for a disability pension for PTSD. But the earliest Clarke will get a hearing is in January or February of next year.

She will be fired Friday. That would leave her without a paycheck for two to three months.

In a letter, she asked chief Rolon to delay her firing.

“Allow me to complete this emotionally difficult separation from my department and my career as a law enforcement officer as a retirement and not a termination,” Clarke wrote.

If her pension is approved, she would be eligible for back-pay. And there is precedent for an Orlando police officer to get a disability pension for post-traumatic stress disorder.

Former OPD Swat Officer Michael Napolitano went before the police pension board earlier this year. Images of Napolitano’s SWAT helmet with a bullet hole in it went viral after the Pulse nightclub shooting.

Officer Michael Napolitano’s helmet in a photo circulated on Facebook after the Pulse nightclub shooting.

Body camera footage shows SWAT Officer Michael Napolitano immediately after being shot in the helmet during the Pulse nightclub shooting.

Officer Michael Napolitano, center, in a photo circulated on Facebook after the Pulse nightclub shooting.

During his pension hearing, Napolitano was grilled on why he didn’t keep getting treatment for PTSD, his other medical conditions and his drinking.

“Do you know you’re not supposed to take alcohol with the medications you were on?” asked homicide detective Michael Fields, who sits on the Orlando police pension board.

“Yet the report says you were drinking up to five drinks a day,” Fields said.

“Well, again, that was a tough time for me and I was dealing with a lot,” Napolitano replied.

He left the hearing soon after that interaction. But the board did ultimately vote to give Napolitano a pension.

“It’s not a blanket statement from the department saying we agree that every applicant who comes to the board with a mental health case will necessarily be someone who should have an application granted,” said David Margolis, an attorney representing the Orlando Police Department at the hearing. “But we are saying each case should be evaluated on its own merits.”

The question now is will the board vote to give Alison Clarke a disability pension – and what will happen after she’s fired Friday.

Correction: This article has been updated to include the correct year of Debra Clayton’s death.