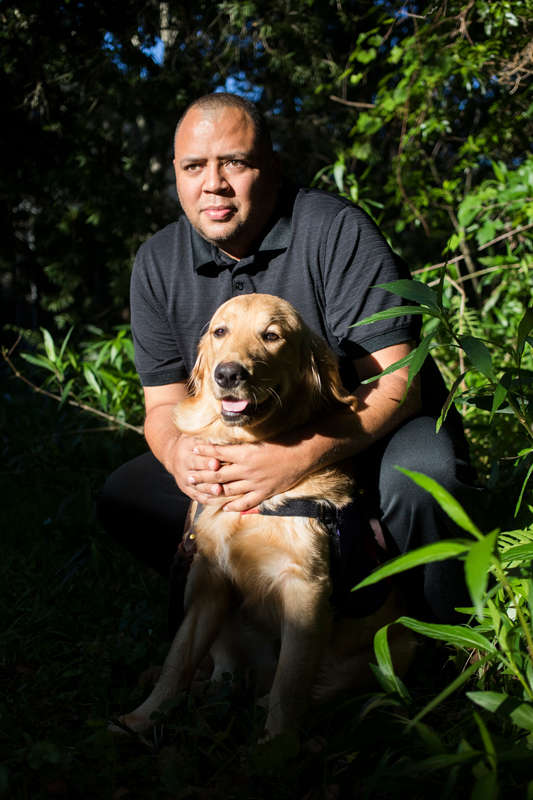 Omar Delgado, 46, credits his therapy dog named Jedi for assisting him in his healing process after being diagnosed with PTSD as an result of the Pulse Massacre. Delgado poses for a portrait near his Sanford home on Tuesday, April 17, 2018, he worked for the Eatonville Police Department for 9.5 years. (Cassi Alexandra for ProPublica)

The Eatonville Police Pension Board voted in favor of granting Delgado disability benefits. The move comes after hearing additional testimony from Delgado about the permanency of the symptoms of his PTSD that started after the shooting. Although Delgado said it makes him sad to know he will never get to be a police officer again because he’s triggered by the sights and sounds of that night, he’s relieved after a year fighting for these benefits:

“You know something that’s easier to understand is someone who breaks their leg. They’re in a cast, six to eight weeks, they’re out of it, they’re good to go. But unfortunately, what I’m dealing with-and what a lot of other Americans are dealing with on daily basis-there’s no time limit.”

Delgado was forced to retire from his job on the Eatonville Police in December 2017 shortly after his diagnosis with PTSD. Starting in February, he’ll receive his pension, but he says it isn’t enough for his family to live on.

“It’s definitely not. That’s something that they’ll be discussing as well. They go by that-the Florida state statute says no less than 42 percent. And I guess I’ll be discussing with my attorney in reference to the percentage that they come up with.”

Still, Delgado said this was an important moment for other people like himself who are struggling with PTSD.