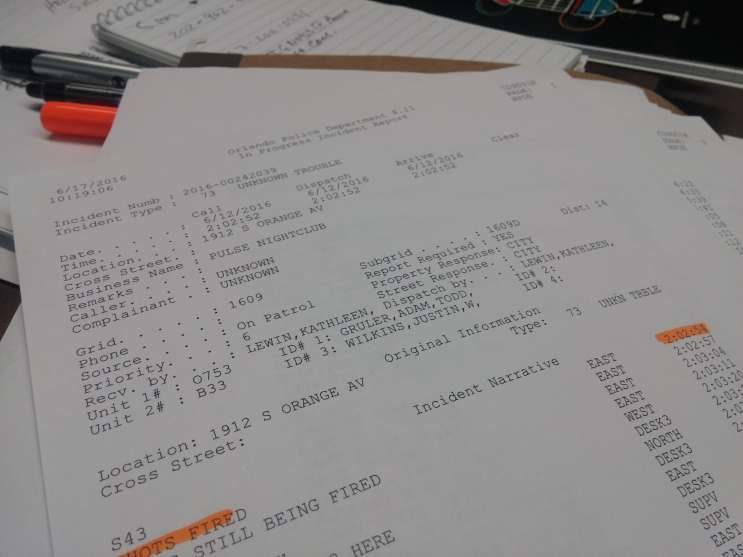 View an interactive timeline of the events during the shooting here.

While the dispatch records in the release paint a minute-by-minute timeline of what happened in the nightclub, there’s a call to release more information to the public.

The scene is grim. Dispatches heard screaming, moaning and gunshots.

The first shots were reported just before 2:03 am that Sunday morning. That’s when Omar Mateen opened fire on the patrons of Pulse.

And for the next 9 minutes, chaos and terror erupt inside Pulse. Dispatchers report hearing gunshots, people calling for help, people screaming ‘I’m shot.’ Some dispatchers report losing contact with their caller.

An incident report obtained from the Orange County Sheriff’s Office show that at 2:11 there was a call for a wide perimeter . While that call was being put out, a dispatcher is on the phone with a victim in the bathroom who was shot in the chest and stomach.

And then, the shooting stops, briefly. Police Chief John Mina said his officer turned their attention to finding the shooter which led them to the bathrooms on the west corner of the building, and then around 2:15 am another exchange of shots.

“The shooter basically came out, poked his head out, and the officers could immediately tell that was not a victim, not a witness, not a patron, because of the way that person was acting,” said Mina. More gun fire was exchanged.

With that, the situation turned from active shooter to hostage situation. “We immediately started getting calls and texts and we knew people were in the bathroom,” said Mina, “so that changes the whole game.”

The gunfire stops around 2:17 am, about 15 minutes after the first reports of shots. That’s around the same time the SWAT Team was called in. This would be the last of the gunfire, according to Mina, until later that morning.

At around the same time the Orange County Sheriff’s records show dispatchers warning officers that it sounds like a long rifle and shields would not protect them.

For the next fifteen minutes, dispatchers start to get a sense of the injuries inside the club. One caller says his fried was shot in the chest, another said they were hit in the shoulder. Another stopped responding to the dispatcher’s questions.

Dispatchers through the sheriff’s office report victims saying their bodies are going numb, people are bleeding out in the bathroom. This is about a half-hour before any mention of explosives.

It’s this call where authorities learn that the shooter pledges his allegiance to a terrorist organization. For the next 50 minutes, the shooter makes 3 more calls with a crisis negotiator. During those calls, the shooter said he had bombs. Search dogs are called in. The last call ended at 3:27.

During this time, a number of hostages were trapped in the bathroom. Inside, Mina says, his officers worked to remove the injured from the main dance floor in the club.

“By about 4:00 am, the only individuals that had not been assisted were the hostages in the two bathrooms,” said Orlando Mayor Buddy Dyer. “So OPD, by 3:00 am, had cleared everybody else and were on the way to the hospital and were in the building for the entire time.”

It wasn’t until there was a threat of a bomb did the officers pull back, but still maintained a close perimeter of the club.

Bomb dogs sniffed the area – and just a little before 4:00 am, people inside the club heard the voice of a robot – that’s a tactical remote-controlled robot that was searching the scene.

At around 4:30 am, callers report the shooter said he would strap bomb vests to 4 people. Soon after, Mina made the call that there was an eminent loss of life – and sent SWAT in.

The team breached the club at 5:02 am. There are reports of shots fired, and by 5:15 am – more than three hours after the ordeal started – the shooter was dead.

While records of Chief Mina’s texts messages and e-mails show messages of support for his decisions – there are questions about the time between the last negotiation call and the decision to breech the club and engage the shooter. Nearly an hour and a half.

Mina stands by his decision – he said that if Mateen began shooting again, he would have no choice but to engage.

Mina said since Mateen was talking with negotiators not shooting,  “it’s our intent to see if we can prevent future loss of life, peacefully resolve this, and get him to come out. That’s the safest way for all involved, and that includes the witnesses, victims and officers. ”

That’s a decision supported by Orlando Mayor Buddy Dyer “100 percent. Anybody who’s questioning that is uniformed. I don’t know how that came to be, that there was a three hour gap where nothing was going on.”

There’s also the question of friendly fire. In the chaos of those first few moments, and the last standoff: Were innocent people hit by police fire? That investigation is now in the hands of the Florida Department of Law Enforcement. Chief Mina wants to know the outcome of the FDLE investigation – and plans to conduct an investigation of his own

“Believe me,” said Mina, “we want to know just as much as the public wants to know. We’re accountable for each and every round. I’ve said this before, I’ll say it again, those killings, to me, are on the shooter and the shooter alone.”

While the documents released this week by the City of Orlando shed some light on what happened in Pulse between 2:00 am and a little after 5:00 am, there are still records withheld from the public – 911 tapes.

Those tapes haven’t been released – with the city citing Sunshine Law and Freedom of Information Act exceptions for active criminal investigation and evidence which depicts the killing of a person.

A group of media organizations sued the city for access to those tapes. The City of Orlando counter-sued, hoping for guidance from the court in balancing the state’s sunshine laws with the FBI’s request for withholding that evidence during an active investigation. Mina says those tapes could help the public better understand what happened:

“We’re committed to being very transparent and release everything we can,” he said, “as long as it doesn’t compromise the investigation. I’m all for those 911 tapes being released.

A hearing on the matter was scheduled in State court this week, but now is being kicked up to the Federal courts.

While details of that night are being released to the public, Mina still has one question on his mind.

The FBI’s investigation into the motive behind the deadly shooting could take months, even years.