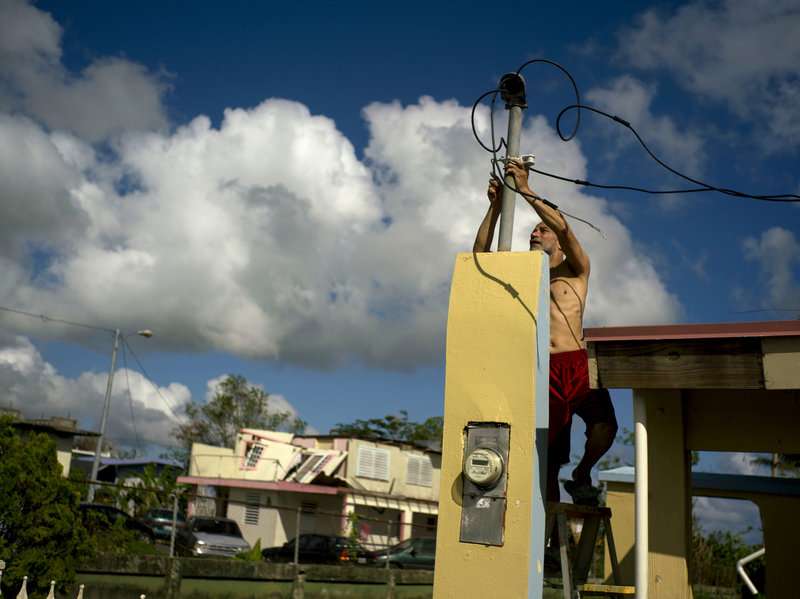 In a photograph taken in October, a resident tries to connect electrical lines downed by Hurricane Maria in preparation for when electricity is restored in Toa Baja, Puerto Rico. Ramon Espinosa/AP

Puerto Rico Gov. Ricardo Rosselló says he is moving to sell off the U.S. territory’s public power company, as nearly a third of the island’s electric customers remain without power four months after Hurricane Maria struck the island on Sept. 20.

Rosselló said Monday that it might take 18 months to privatize the insolvent Puerto Rico Electric Power Authority, or PREPA, the largest U.S. public utility measured by the number of customers – 3.3 million.

“The Puerto Rico Electric Power Authority does not work and cannot continue to operate like this,” Rosselló said in a televised address. “With that PREPA, we cannot face the risks of living in an area of high vulnerability to catastrophic events.”

Even before the hurricane, PREPA has had its problems. Its power generation plants burn expensive and polluting oil and its infrastructure averages about 45 years old, compared to about 18 years for utilities on the U.S. mainland, according to The Associated Press.

The AP notes: “Many also wonder who, if anyone, would be willing to buy a power company that has a $9 billion debt load, filed for bankruptcy last year and faces longstanding accusations of mismanagement and corruption. But Puerto Ricans in a flurry of exchanges across social media after Monday’s announcement seemed to agree that any change would be a good one, though they remained wary that the utility could fall into the wrong hands.”

In October, PREPA hired Whitefish Energy Holdings, a little known Montana-based company with ties to Interior Secretary Ryan Zinke, to head up the effort to restore power. The $300 million contract drew intense criticism and in late October, Rossello announced the contract with Whitefish was being terminated.

In his address, the governor said privatizing PREPA would improve service, reduce the cost of electricity and increase investment in renewable energy.