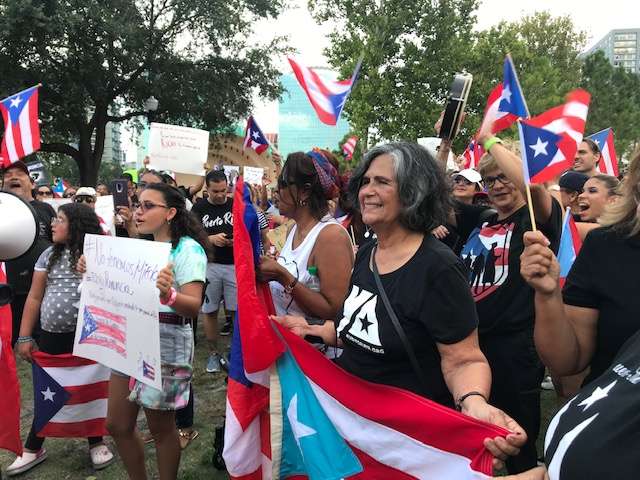 Puerto Rican Governor Ricardo Roselló announced his resignation Wednesday night after nearly two weeks of protests in Puerto Rico and across the world. The backlash came out of a decade of frustration with elected leaders and most recently, pages upon pages of leaked group chat messages where Roselló and other politicians made fun of Hurricane Maria victims, women and members of the LGBTQ community. Jennifer Marcial, editor of El Sentinel Orlando, Maria Padilla, founder and editor of Orlando Latino, and Ricardo Negron of Latino Justice joined Matthew Peddie on Intersection this morning to talk about how the situation reached this point and what is next for the island.

Marcial joined us from San Juan Puerto Rico where she was on vacation with her mother when the protests started.

“It’s so much more than just the chat. The chat revealed years and years, decades of mismanagement in the government of Puerto Rico, in different political parties but obviously, the people in this chat were filled with governors of Roselló’s party. So people said, enough is enough. It’s been years of us paying for you not being able to do the job you were chosen to. Many of the people we’ve spoken to on the streets, I think them mocking the deaths of Hurricane Maria hits hard. Hits hard even for us in the diaspora,” Marcial said.

“Something that has impacted me is the age. You see young people, you see people from 15 to 30-something year old. And then you see older people too, but the majority of the people are the younger ones, the millennials, the centennials, it’s the people that ‘we grew up knowing all the corruption that has happened in our government. For our future we do not want this to happen’, and that’s what they’ve been telling us.”

Padilla sees the chat as politicians unmasking themselves. She also points out that the chats were preceded by the FBI arresting six Puerto Rican officials and advisers for alleged corruption.

The mood in Puerto Rico after the resignation is ‘ecstatic’, according to Marcial.

Negron of Latino Justice finds the movement beautiful in how it united the people of the island.

But now the question for the island now is, who is next to take the position of Governor?

Padilla explains that because “so many people were involved in the chat, it is now difficult to identify who will be a good candidate for this position.” She says that the Secretary of State is the second in the line of succession but the position is empty after Luis G. Rivera Marín resigned soon after the chats he was involved with were released. Third in line is Justice Secretary Wanda Vásquez. According to Padilla, many Puerto Ricans do not like her for her inaction to investigate the mismanagement of funds after Hurricane Maria. Fourth in line is the Secretary of Treasury, who does not reach the 35-year-old requirement for the Governor of Puerto Rico. Some are calling for a re-election.

An appointment to the empty Secretary of State position may resolve this, but as Negron points out, the position would require confirmation by both House of Representatives and the Senate.

“People really want to clean the house. Even if we have an appointed governor, it’s not going to stop there. People are really going to be looking at politicians from now on and we have to rebuild Puerto Rico so that’s the biggest challenge.”