Public Defender Says Program Arrests Some For Being Poor 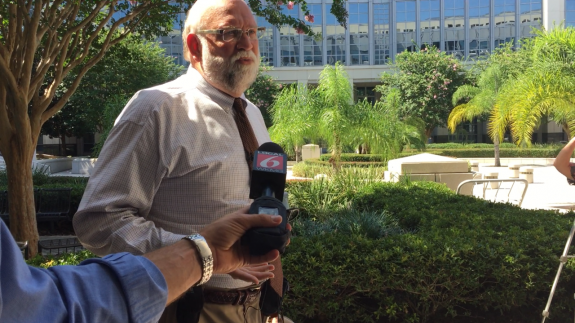 A Central Florida public defender called for an end to arrests for being broke. And the chief judge agrees the program needs to be evaluated, but for different reasons.

Wesley said that, just Tuesday morning, five people were arrested and brought before the court for unpaid fines – all with mental health issues.

“One fellow we know because we checked him into the state hospital two weeks ago,” Wesley said at a press conference in front of the courthouse Tuesday. “His offense was panhandling. He got court costs for panhandling, now he’s back in jail for not paying the costs, and we know him to be a person who eats from garbage cans and begs for money on the street. This is not a guy who’s going to be able to pay the costs.”

Wesley said the Ninth Judical Circuit, which oversees Orange and Osceola counties, used to have a program where court fines and fees could be eliminated. He pointed to a case in 2012 where a schizophrenic man named George was forgiven of $90,000 in fines he had accumulated from multiple arrests.

“We have to have a consistent policy on how we’re gonna use this function, the awesome power to arrest someone and incarcerate them with all the expense and all the problems with that cost,” Wesley said. “Who are gonna be the candidates, how are we gonna use it. Because right now now we’re arresting people who will never pay only for the purpose of arresting them.”

Wesley wants a commission to look into arrests for failure to pay court fines, as well as changes to low-value arrests, like panhandling. He says after the Justice Department findings in Ferguson, Missouri, Central Florida needs to make sure its house is in order.

And Chief Judge Frederick Lauten said the court stopped issuing the arrest orders, called writs, last month. In an interview, he said they want to see if the program is economically sound.

“That is are we spending more money to issue and execute a writ than on collections over time by that mechanism,” Lauten said. “And if we concluded we’re throwing good money after bad, we might stop using writs.”

There are more than 20,000 of these arrest orders, called writs, outstanding in just Orange County.  Lauten said cases like the schizophrenic man with $90,000 in fees and the man arrested while on hospice are outlier cases.

The Clerk of Courts collects about $48 million in court fees and fines per year, and some of that money funds salaries at the public defender’s office..