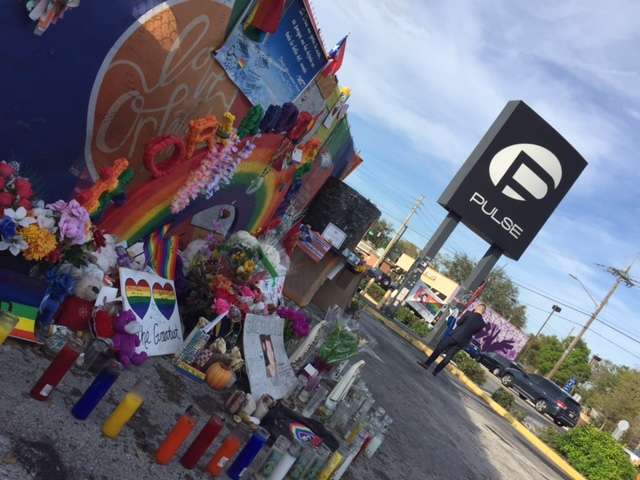 Gerry Realin wishes he had never become a police officer.

Realin was part of the Hazmat team that responded to the Pulse night club shooting in Orlando. He spent four hours taking care of the dead inside the club. Now, triggers like a sharpie marker or a white sheet yank him out of the moment and back to Pulse.

The slightest thing enrages him or makes him sad.

“But then there’s the moments you can’t control,” Realin said. “The images or flashbacks or nightmares you don’t even know about, and your wife tells you the next day you were screaming or twitching all night.”

Realin was diagnosed with post-traumatic stress disorder, and hasn’t worked since right after the shooting. It’s not just Realin who’s dealing with it. His family is too.

“Hiding from your kids so that they’re not traumatized by your rage or depression,” Realin said. “Which gives them a sense of insecurity. Which isn’t good.”

Realin isn’t alone: At least one other police officer has come forward with a PTSD diagnosis after Pulse. And that may be the tip of the iceberg.

Orlando City Commissioner Patty Sheehan says there are people who go to war and don’t see what officers saw inside Pulse.

“I’ve talked to some of the officers and they’re pretty traumatized by what they saw,” Sheehan said. “It was horrible, the sights and the smells and the thing that really haunts them is the cell phones that were in their pockets ringing.”

Sheehan has heard from first responders and mental health workers that there are more officers with issues who don’t want to come forward. That’s because they don’t want to be seen as weak or unfit for duty.

“If someone is to the point where they have had an emotional stress to where they can’t perform their job, of course I don’t want to put a gun in their hand,” Sheehan said. “That’s just common sense to me.”

Researchers say there isn’t enough data on PTSD rates in first responders. But the best estimates are anywhere from 7 to 19 percent of police officers have PTSD. When clinicians interviewed more than 400 officers at the Buffalo, New York Police Department, 15 to 18 percent had PTSD.

And a 2012 study found police officers were twice as likely to die from suicide than traffic accidents and felony assaults.

“I don’t think officers are disposable,” said Ron Clark, a retired officer who works with Badge of Life, a police suicide prevention group.

He said when he started, people were told to suck it up. Officers used alcohol, drugs or sex to deal with it. And if you spoke up, you were likely to get fired.

“And it really comes down to police officers are human beings,” Clark said. “They’re affected by what they see out there. Decapitated children, families wiped out in car accidents, suicides. Just name all the horrors you can think of.”

The Realins have been advocating for workers comp in Florida to cover PTSD when there is no physical injury. On a recent trip to Tallahassee, Jessica Realin said she was learning Politics 101 in Florida’s capitol.

“I feel like I’m having a pinch me moment,” Realin said. “Like I can’t believe I’m actually here. First-day-of-school kinda jitters.”

She went door-to-door in Tallahassee to ask senators to support Senate Bill 1088. It would give first responders with PTSD access to benefits like lost wages if they can’t work.

In the capitol building, we head up to the fourth floor to try and meet Miami Republican Anitere Flores. She’s the second-in-command in the Senate, and chairs the banking and insurance committee that will be voting on 1088 later that day. It Jessica Realin’s second time in the office to try and meet Flores.

And aide steps out to meet us, and says the senator doesn’t have time.

“Can you let her know I did stop by, Jessica Realin, I’m to be speaking at Banking and Insurance,” she says, explaining that she doesn’t have a card.

One senator who did meet with Jessica Realin? Kissimmee Democrat Victor Torres, a retired officer who is shepherding the bill. He’s seen first-hand what happens when PTSD goes untreated.

“You go on a weekend you leave work have the weekend off and you come in Monday and hear about officer so-and-so committing suicide,” Torres said. “Young man. You wonder why? What was his issues?”

At this point in the session, the bill has almost no chance of passing, but Torres manages to get a committee to hear the bill. That gives people like Amanda Murdock a chance to be heard. Her husband is a Vero Beach firefighter with PTSD.

“I’m gonna make myself very vulnerable, my family very vulnerable,” Murdock told the committee. “This last fall my husband attempted to take his own life. Six days later, one of his closest friends, battalion chief Dave Dangerfield, was successful in taking the final step in taking his own life, leaving behind two sons.

Murdock said all she could think about on the way to the funeral was that could have been her. After hearing the testimony from Murdocks, the Realins and others, the committee passed the bill unanimously.

But ultimately, the bill got no movement in the house. Advocates vow to bring it back next year.

So how do you cope with those horrors once you’ve seen them? For Orlando officer Gerry Realin, one escape is being all alone on his paddle board on the water, listening.