Protests Over Racism Versus Risk Of COVID: ‘I Wouldn’t Weigh These Crises Separately’ 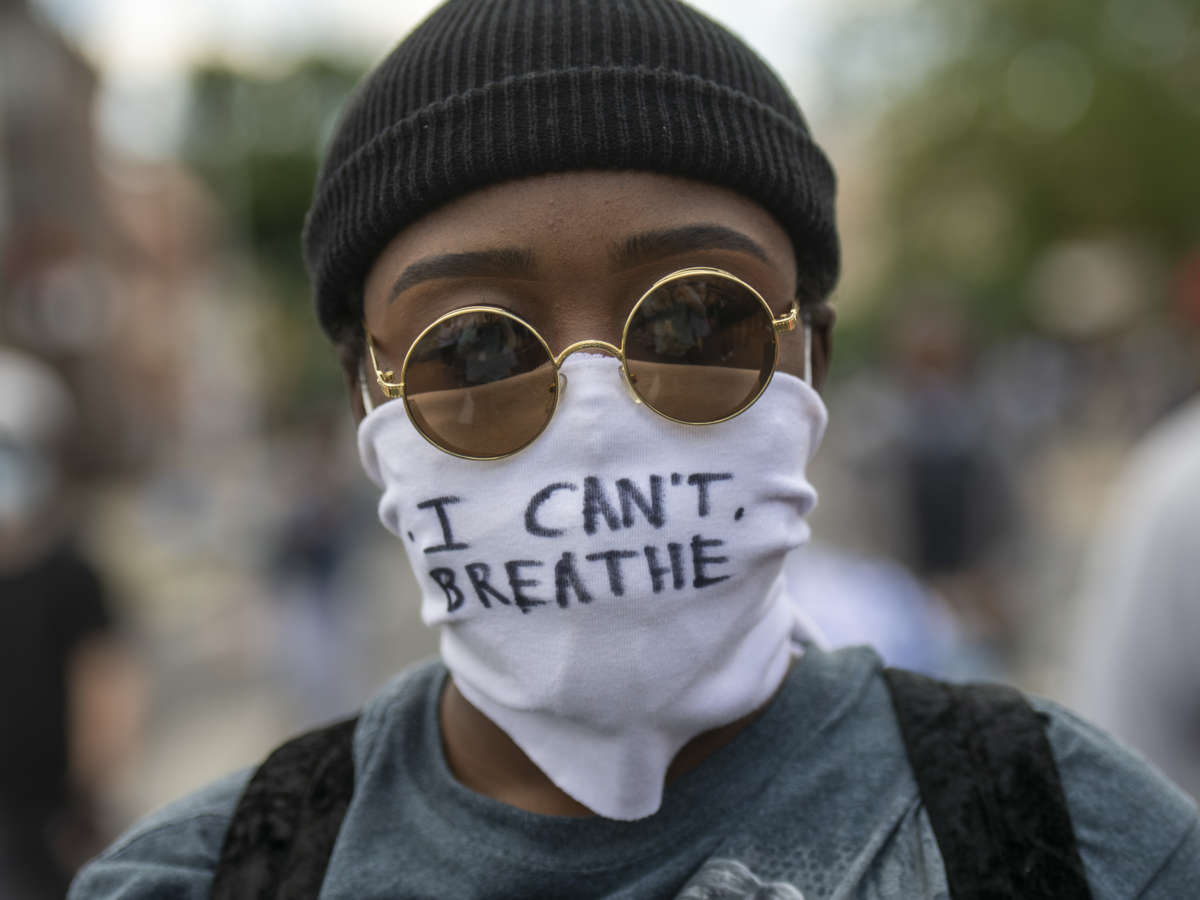 Protests over police treatment of black people have sparked concerns over the possible spread of COVID-19. Here, a protestor marches with a cloth mask stating "I CAN'T BREATHE" in Philadelphia on Monday.
Image credit: Mark Makela

Mass protests that have erupted over police brutality toward black people in America are raising concerns about the risk of spreading the coronavirus. But some health experts, even as they urge caution, say they support the demonstrations — because racism itself also poses a dire health threat.

Tens of thousands of people, masked and unmasked, have thronged Minneapolis, Louisville, Atlanta and other cities in the week since the death of George Floyd, who died after a white Minneapolis police officer kneeled on his neck. They are the largest public gatherings in the U.S. since the pandemic forced widespread shutdowns, and many local officials are warning of a possible spike in new cases in one or two weeks.

“Risk of transmission is lower in open spaces, but wherever there is a gathering there is still the risk of transmitting the virus,” says Dr. Elaine Nsoesie, an assistant professor of global health at Boston University.

Health experts are urging protesters not to sing and shout to reduce the threat of person-to-person transmission. And they caution that police tactics such as tear gas and pepper spray could exacerbate the situation, as they prompt victims to cough and gasp for air.

The New York City Health Department has issued a list of tips for demonstrators to lower their risk of contracting COVID-19, by covering their faces and staying in small groups.

“Don’t yell; use signs & noise makers instead,” the advice stated.

Nsoesie says that while she agrees with the sentiment, “I can see how some of these tips can be difficult to follow. For example, if you are angry or frustrated about an issue, you want to express that feeling and speaking is one way of doing that.”

“It’s also hard to keep 6 feet of distance at a protest,” she adds.

The city is still limiting gatherings to no more than 10 people. But in the streets around the White House, that cap is regularly exceeded by orders of magnitude.

“I’m so concerned about it that I’m urging everybody to consider their exposure if they need to isolate from their family members when they go home and if they need to be tested, because we have worked very hard to blunt the curve,” Bowser said on NBC’s Meet the Press.

But the risks of congregating during a global pandemic shouldn’t keep people from protesting racism, according to dozens of public health and disease experts who have signed an open letter in support of the protests.

“White supremacy is a lethal public health issue that predates and contributes to COVID-19,” the letter states.

Initially written by infectious disease experts at the University of Washington, the letter cites a number of systemic problems, from the disproportionately high rate at which black people have been killed by police in the U.S. to disparities in life expectancy and other vital categories — including black Americans’ higher death rate from the coronavirus.

“Data is showing that blacks and Latinos have been disproportionately affected by COVID-19 in many states,” says Nsoesie, who was not among the letter’s signatories when she was contacted by NPR. “Racism is one of the reasons this disparity exists.”

“Racism is a social determinant of health,” she continues. “It affects the physical and mental health of blacks in the U.S. So I wouldn’t weigh these crises separately.”

Local governments should not to break up crowded demonstrations “under the guise of maintaining public health,” the experts say in their open letter. They are urging law enforcement agencies not to use tear gas, smoke and other irritants, saying they could make people more susceptible to infection and worsen existing health conditions.

The medical professionals also acknowledge the potential for COVID-19 cases to rise in the days to come, and they are calling for public health agencies to boost access to care and testing in affected communities.