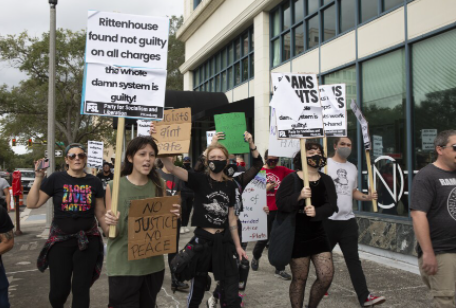 A few dozen protesters gathered at St. Petersburg City Hall Saturday afternoon, then marched through the downtown, to share their frustrations and anger about the Kyle Rittenhouse verdict. (Daylina Miller / WUSF Public Media)

Activists in the Tampa Bay region are speaking out after a Wisconsin jury found Kyle Rittenhouse not guilty for killing two people and wounding a third during civil unrest in Kenosha last summer.

A few dozen protesters demonstrated in downtown St. Petersburg on Saturday, first outside City Hall and then during a march through a busy street festival on Central Avenue.

“What do we want? Justice! When do we want it? Now!” they chanted.

Most onlookers nodded and clapped in support. But during the march, a handful of people — all white — briefly heckled the protesters or shouted about the not guilty verdict.

Christina Boneta leads the Pasco County chapter of Black Lives Matter and spoke at the rally. Many of that group’s demonstrations last summer involved clashes with counter-protestors, some of whom were white supremacists Boneta said threatened violence.

“So the reason why I’m out here is because like this hits home for me,” she said. “We’ve had a lot of guns brandished on us and pointed at us many, many times so it could have been us basically.”

Rittenhouse’s attorneys argued he acted in self-defense when he shot and killed two men and injured another with an AR-15 last summer. The teen said he was in Kenosha to protect businesses during protests over a white police officer shooting a Black man named Jacob Blake, who was paralyzed from the incident.

Similar to Florida’s Stand Your Ground law, Wisconsin allows people to use deadly force if they believe they’re in imminent danger.

Devonte Sullivan with the Tampa Bay chapter of the Party for Socialism and Liberation, which organized the rally, said he wasn’t surprised Rittenhouse, who is white, wasn’t convicted.

“I think that’s the worst part of all is more so we’ve become desensitized to this whole thing, and I fear that situations like this will only continue to persist as long as the defense rules we have in place like Stand Your Ground continue to persist in the way that they have in multiple states,” he said.

Activists at the St. Petersburg march say they believe had Rittenhouse been Black, the jury’s verdict would have been different. And they say they fear the case will embolden vigilantes to use violence against protesters in the future.

Similar protests took place in cities around the nation. Another demonstration is scheduled for Sunday afternoon in Sarasota.