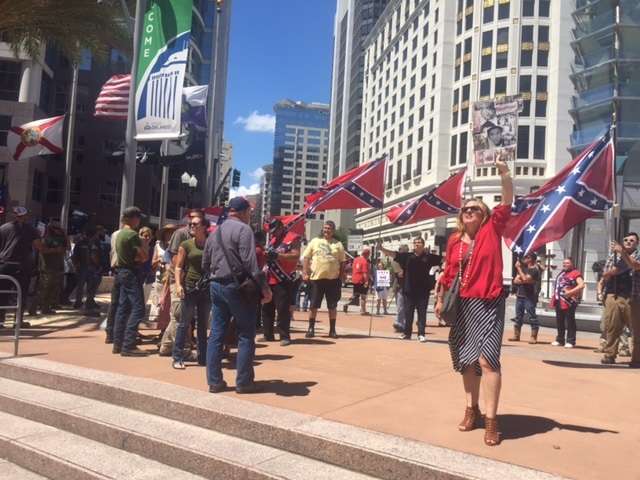 Kim Portious, right, calls for the statue's removal surrounded by those who want it to stay./Photo: Catherine Welch, WMFE

Orlando Mayor Buddy Dyer says the confederate statue at Lake Eola should be moved to Greenwood Cemetery. The Orlando Sentinel reports Dyer made the suggestion after resident David Porter called for the statue’s removal.

Outside City Hall protesters clashed, many of them wanting the statue to remain and waiving confederate flags.

“We’ve got to stand up for it, because it is part of our history, it’s our heritage and it’s what our ancestors did, said Dannie Nelson.

But Kim Portious disagrees, saying it marks an ugly chapter in American history.

“We are in 2017 and we need to take a better stand and say ‘we’re better than this.’” We need to take it down and put something beautiful that represents all of us,” said Portious.

The statue was commissioned by the United Daughters of the Confederacy and has stood at Lake Eola for 100 years.

Porter said the statue is not valid without historical context, and suggested placing it in a history museum where it can be explained.