Protesters Across Europe Clash With Police Over COVID-19 Lockdowns 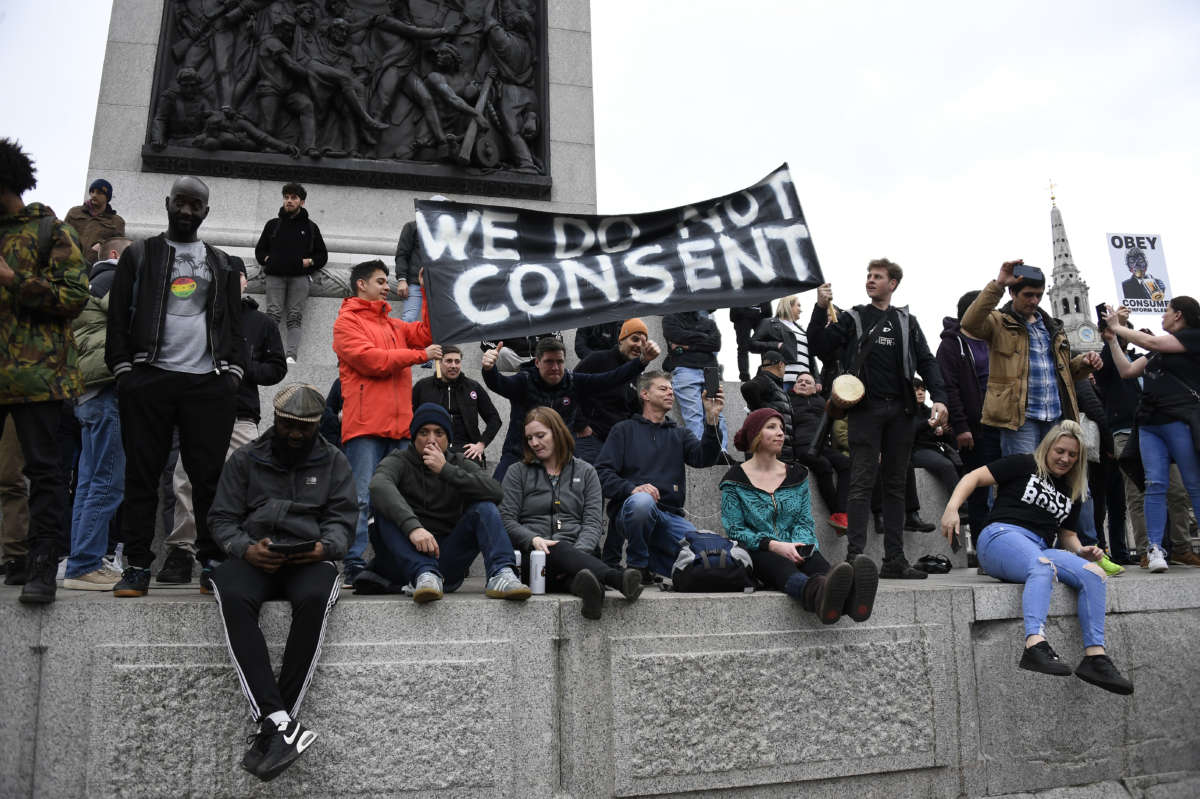 People without face masks attend a protest against government restrictions to curb the spread of the coronavirus in London on Saturday.
Image credit: Alberto Pezzali

Anger at restrictions imposed to contain the coronavirus pandemic swept into the streets of Europe on Saturday.

German police used water cannons, pepper spray and clubs on protesters rallying over the coronavirus lockdown in the town of Kassel in central Germany where demonstrators numbered some 20,000. Protests against government measures to rein in the pandemic were also reported in Austria, Britain, Finland, Romania and Switzerland.

Germany faces a surge of COVID-19 infections as a more contagious variant of the virus has spread. Experts say it highlights the need to accelerate vaccinations.

But a botched vaccine rollout appears to have deepened distrust against the German government. The suspension of AstraZeneca vaccine was the latest hurdle in Germany’s efforts to vaccinate its population of 83 million.

After a three-day pause in using AstraZeneca, Germany is now trying to right the course.

NPR’s Rob Schmidt reported that “at the start of the pandemic Germany was a global model for how to manage it.” But a year into it, the opposite appears to the case. Just 8.5% of Germans received their first shot, as of Friday, far behind other nations including the U.S. and the U.K.

Britain’s speedy vaccine rollout — it was the first in the world to administer a fully tested vaccine — has been a surprise success for the government of Boris Johnson, who has received heavy criticism for his response to the virus.

But it didn’t stop thousands of people attending anti-lockdown demonstrations in London on Saturday. Protesters held placards that read, “Fear Westmonster, Not the Virus, and “Stop Destroying Our Kids’ Lives” as they marched in central London along Oxford Street, the Embankment and Parliament Square before heading up to Whitehall.

In Hyde Park, police were forced back into their vans as demonstrators lobbed bottles and cans at them. The BBC reported that few protesters appeared to be wearing masks. London Metropolitan Police said 36 people had been arrested during the rallies, most of them involving violations of COVID-19 regulations.

The protests came the same day as 60 members of parliament urged the home secretary to ease restrictions on demonstrations. Due to coronavirus restrictions, it’s currently unlawful for groups to gather for the purpose of protest. But the measures came under direct assault this week.

The outcry over lockdowns has combined with a groundswell of rage at the abduction and death of Sarah Everard, a 33-year old woman who went missing earlier this month while walking home. Her body was found a week later, and a serving police officer has been charged with her murder. Police are under scrutiny for their alleged heavy-handed tactics in breaking up a well-attended outdoor vigil for Everard last Saturday that ignited three nights of protests.

A spokeswoman for the interior ministry told Reuters, “While we are still in a pandemic we continue to urge people to avoid mass gatherings, in line with wider coronavirus restrictions.”

Prime Minister Boris Johnson is reportedly planning to introduce a controversial new law banning protests that are noisy or cause “serious annoyance,” and would carry a maximum jail term of 10 years.