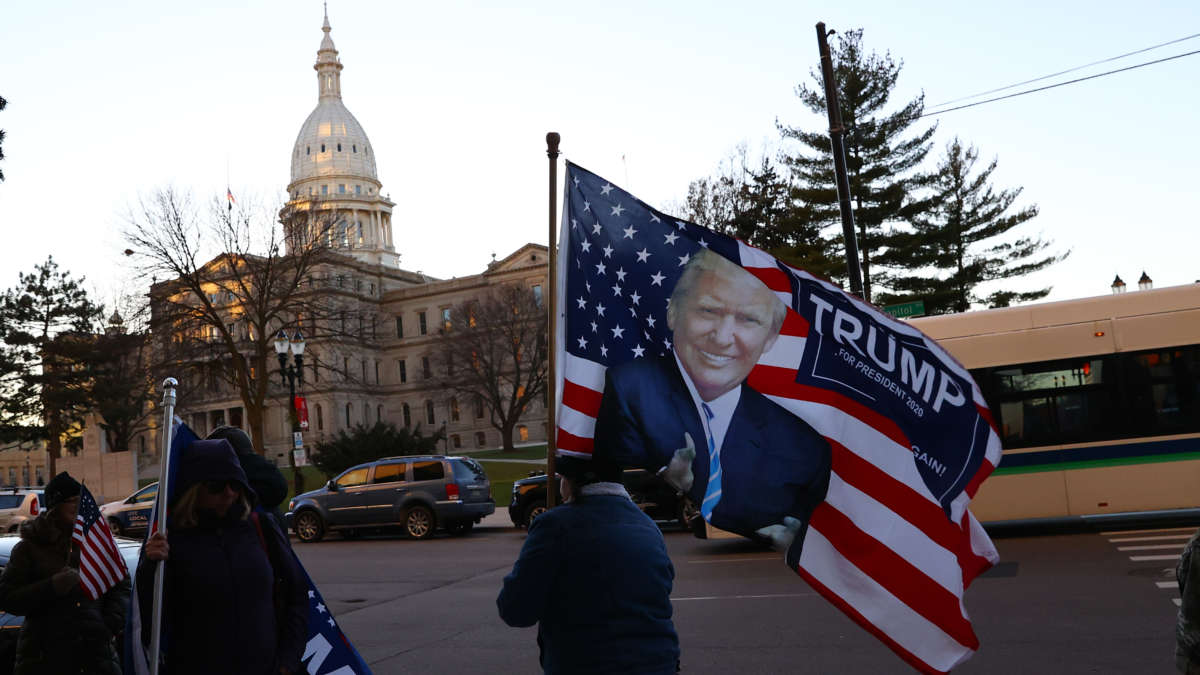 During the chaotic two months following the 2020 presidential election, groups of Republicans in seven states won by Joe Biden met and signed documents falsely asserting that Donald Trump was or may be the rightful recipient of their state’s Electoral College votes.

The efforts, which in many cases seem to have been coordinated by high-ranking members of Trump’s campaign team, weren’t successful. Congress did not accept any of the illegitimate results on Jan. 6, 2021.

But the actions by those groups across the U.S. still may have been illegal.

Attorneys general in at least two of the seven states where the Republicans met, Michigan and New Mexico, say they have referred investigations regarding the separate slates of electors up the ladder to federal prosecutors.

“Election laws are the foundation of our democracy and must be respected,” said New Mexico Attorney General Hector Balderas, in a statement to NPR confirming his referral of the matter to U.S. Attorney Fred Federici.

Those efforts were uncovered shortly after the election, but they’re now getting renewed scrutiny for a number of reasons.

The House committee tasked with investigating the Jan. 6, 2021, attack on the Capitol is focusing on them, according to the panel’s chairperson, Rep. Bennie Thompson, D-Miss.

The committee subpoenaed two high-ranking Trump campaign officials last week who were reportedly involved in the scheme: Rudy Giuliani and Boris Epshteyn. Epshteyn told MSNBC on Friday that he was involved in the effort, and the The Washington Post and CNN reported last week on Giuliani’s involvement.

“We are concerned that documents have been filed saying they were individuals responsible for conducting and certifying elections, and they are not,” said Thompson over the weekend on CBS. “And when you falsify documents, in most instances, that’s a criminal act.”

The announcements this month from Balderas and Michigan Attorney General Dana Nessel similarly seemed to indicate there could be legal ramifications for people in Trump’s orbit who sought to overturn the election, after more than a year without any.

Some legal experts aren’t convinced there will be consequences

Ben Ginsberg, a longtime Republican election attorney, called it “pretty unlikely” anyone involved in the scheme to send fake election results sees jail time, for instance, because there aren’t clear laws that outlaw the specific action.

Nessel, of Michigan, mentioned forgery and conspiracy against the U.S. as possible charges, but Ginsberg said what transpired in 2020 doesn’t fit cleanly.

“What went on was certainly intentionally misleading,” Ginsberg told NPR. “But I think it is one of those areas probably not contemplated by those who drafted the laws, so the specific statutes are not immediately obvious — as bad as this was.”

This scenario is itself an argument, Ginsberg says, in favor of reforming the Electoral Count Act, which governs the process for certifying the presidential election.

The law is notoriously vague when it comes to settling electoral disputes, which opens the door for scenarios like 2020 where a losing party can submit a competing set of electors in hopes of taking advantage of cracks in the poorly written law.

Momentum is building in Congress for refreshing the 1887 law, and Ginsburg says rewriting it would go a long way toward discouraging losing parties from trying similar tactics in the future.

“The key to the electoral system is the integrity of the people involved,” Ginsberg said. “There is no way possible to legislate for every kind of bad act. All you can do is firm up the guardrails around the process.”