Pro Bowl To Broadway, This NFL Star Says The Stage Is Another ‘Team Sport’ 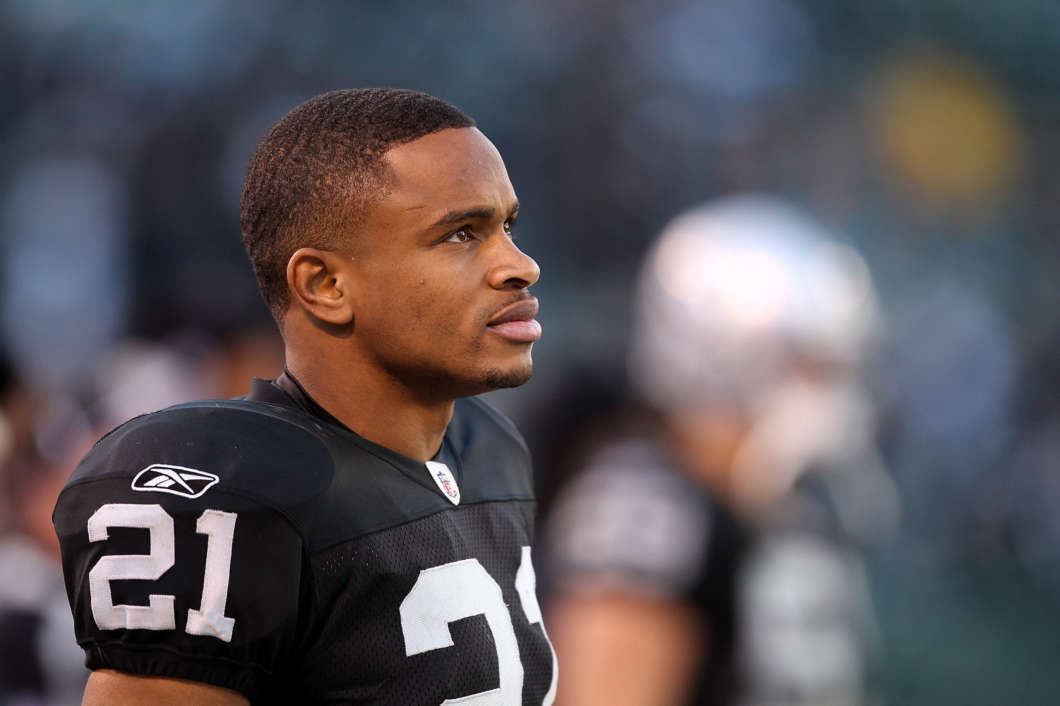 "I'm a student first in everything that I do," says Nnamdi Asomugha. "So it's always about: How can I get the edge mentally?" Asomugha, shown above on the sidelines of an Oakland Raiders game in November 2010, is now making his Broadway debut.
Image credit: Ezra Shaw

There aren’t many people who can say they started the decade at the Pro Bowl and ended it on Broadway — but Nnamdi Asomugha can. The four-time All-Pro NFL cornerback is making his Broadway debut in a revival of Charles Fuller’s Pulitzer Prize-winning drama, A Soldier’s Play.

Asomugha grew up in Los Angeles, the son of Nigerian immigrants. He played for UC Berkeley and then in the NFL for 11 seasons, mainly with the Oakland Raiders, as one of the most respected cornerbacks in the game.

“I could be biased, but I think it is the most difficult position to play in sports,” Asomugha says. “You’re covering someone and they know exactly where they’re going, and your job is to figure out where they’re going and get there before them — while running backwards.”

Even as he put fear in the hearts of quarterbacks and wide receivers, Asomugha was thinking about a life after football. While he was playing for the Raiders, he filmed a Nike commercial with director Peter Berg, who hired him to play a recurring role as a parole officer on the TV series, Friday Night Lights. After Asomugha retired in 2013, he turned toward film and theater.

“I think filmmaking and theater is very much a team sport,” Asomugha says. “It’s a group of people that are coming together with a common purpose to achieve a goal. And no one person is bigger than the team — I’m trying to think of all the cliché things that they tell you in football.”

Asomugha has now produced and performed in a number of films and co-produced American Son on Broadway, starring his wife, Kerry Washington. He co-starred in the 2017 film Crown Heights, which won an Audience Award at Sundance.

A Soldier’s Play is about a platoon of former Negro League ball players in the Army in 1944. “At its surface level, it’s a whodunit play,” Asomugha says. “At its core, it’s a play about interracial and intra-racial complexities.”

Tony Award-winning director Kenny Leon says Asomugha is at the beginning of a “great all-pro” Broadway acting career. “He has a sense of truth and authenticity,” Leon says. There’s an “effortlessness” to Asomugha’s acting that “you can’t teach,” the director explains.

Asomugha plays Private First-Class Melvin Peterson — the role Denzel Washington performed in the original 1981 production. “He’s the new guy to the group,” Asomugha says — and as a new Broadway actor, he can relate; his fellow actors “have been in a million plays and this is my second,” Asomugha says.

When it comes to discipline and focus, starring on Broadway and starring in the NFL aren’t really so different. “It’s been difficult,” Asomugha says. “It is definitely a workout, doing eight shows a week.”

Still, just last week, Asomugha spent his day off at the Sundance Festival, where his new romantic comedy, Sylvie’s Love, had its world premiere. The film is about two teens falling in love in 1950s Harlem and Asomugha, as an actor and a producer, has been wearing multiple hats.

“You literally do go from ‘Cut!,’ to taking business phone calls about the film, to ‘Action!’ and then you’re back in the scene …” he says. “It is extremely tough and also gratifying at the same time.”

As for who he’ll be rooting for at the Super Bowl on Sunday? Asomugha says Andy Reid, head coach of the Kansas City Chiefs, was one of his great mentors — “So I’m really rooting for him,” he says.

Ted Robbins edited this story for broadcast. Beth Novey adapted it for the Web.