Privacy concerns loom as use of body cameras grows 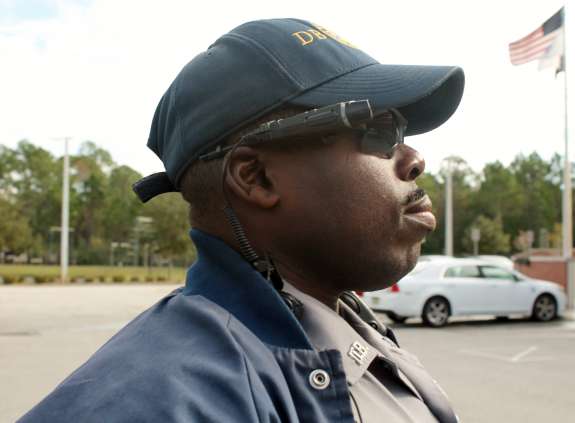 Jermaine Jones, a patrol officer with the Daytona Police Department, wears a body camera to record his interactions with the public.. Photo: Renata Sago, WMFE.

For over ten years he has responded to everything from noise complaints to stolen vehicles, but since early December, he has had a sidekick:  a black camera the size of a mini-stapler.

“I can wear it on the side of my head like a cyborg, but I don’t like to,” Jones said as he attached the magnetic camera to his sunglasses.

He prefers to wear the camera on his collar—and people notice.

“Oh my God! You’ve got a camera! Stay away from me!” Jones said he tends to hear from people. “No one really wants to be on camera, but that’s just the way of it. It’s safer.”

The cameras started out as a test in 2011 for what Daytona police chief, Michael Chitwood, called “high liability” cases, such as serving warrants. Chitwood ordered more cameras, and more, and with 100 cameras out on the streets, they are now common practice.

Seven other police agencies in Florida have started using the cameras for the same reasons.

For Chitwood, there is one main policy for deploying the cameras effectively: when an officer steps out of the car, the camera starts rolling.

“Both law enforcement and state attorneys right now are just trying to wrap our heads around all the potential issues,” he said.

Ashton believes the Florida Sunshine law, which opens access to public records, is quite foggy when it comes to privacy rights.

“I don’t think at this point, that we could even come up with a responsible list of issues that have to be addressed,” he said.

In May the Police Executive Research Forum, a national group of police chiefs, released a study of law enforcement agencies nationwide using body cameras. The research and policy group found that many agencies do not have a written policy on when and who to record or how long to keep the footage.

Daytona police chief Michael Chitwood saves his footage for 38 months—two months longer than the 36-month deadline to file a civil dispute claim against an officer.

However, the American Civil Liberties Union of Florida recommends destroying the footage after just three months, unless there’s a complaint or a pending case.

Florida ACLU public policy director Michelle Richardson said the very tool to protect Florida citizens and officers, could be used to incriminate them.

“We’ve seen in the past with wiretaps or police reports that sometimes, internally, there are people who are just curious or they hear about their neighbor or girlfriend, and they start digging for information.”

Victim advocates that WMFE spoke with also raised concerns about whether crime victims are even emotionally capable of consenting to video, right after a crime has been committed.

Lui Domiani, who operates a 24-hour-rape crisis hotline that supports sexual assault victims, said, “A lot of times, people that are in the aftermath of the most horrific experience of their life, they’re in shock. I guess, the question in my mind is—are they really able to answer that question when the question’s being posed to them?”

Orlando police chief John Mina is keenly aware of these sorts of questions. Mina is testing out 50 cameras in a study with the University of South Florida and plans to equip 400 officers with cameras to record traffic stops and interview suspects.

“Certainly we don’t want every single moment that happens here in Orlando on video and audio recording,” he said.

Mina’s biggest concern is the cost and time it will take to fulfill public records requests from the media.

“That’s going to have to take someone to sit down and look through all that video to make sure there’s something on there that’s not private,” he said.

It will cost an estimated $1.3 million to equip the Orlando police officers with cameras for three years.

Mina hopes to receive some of the funding from the federal government, which is where Daytona Police chief Michael Chitwood believes regulation will eventually come from.

With all the questions about body cameras, civil rights groups and police chiefs like Chitwood agree the new technology is a positive thing.

“The technology is here, you might as well use it, and for some reason most people do tend to behave properly when they know they are being filmed,” he said.