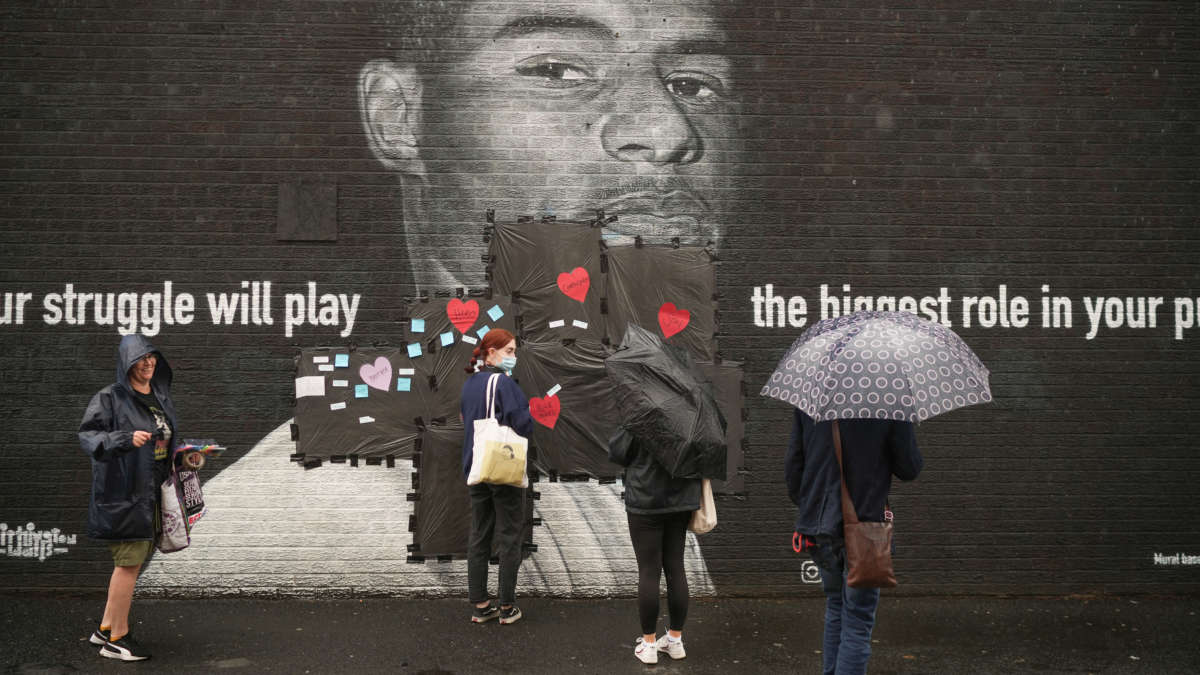 People placed supportive messages over the defaced mural of Marcus Rashford, the 23-year-old English football star who has faced racist harassment after missing a penalty kick in England's loss to Italy in the Euro finals.
Image credit: Christopher Furlong

The country’s highest-profile soccer organizations are now urging consequences for the torrent of harassment, which began almost instantly after England’s loss to Italy, 3-2 on penalty kicks. The game marked England’s first international finals appearance in more than 50 years.

The abuse has been aimed at the three England players who missed their penalty kicks. All three – Marcus Rashford, Jadon Sancho and Bukayo Saka – are Black.

Prince William, who serves as president of England’s Football Association, wrote on Twitter that he was “sickened by the racist abuse” aimed at the the three Black players. “It must stop now and all those involved should be held accountable,” he said.

In a statement released Monday, the Football Association, the sport’s governing body in England, urged the British government to take action on legislation to criminalize online harassment and called on social media companies to do more to remove abusive users.

“We strongly condemn all forms of discrimination and are appalled by the online racism that has been aimed at some of our England players on social media,” the statement read. “We could not be clearer that anyone behind such disgusting behaviour is not welcome in following the team.”

London’s Metropolitan Police announced it will investigate the abuse.

“When you abuse any of our players, you abuse all of us. Racist abuse causes trauma. It will impact the targeted players, their teammates, and we know it will also affect their peers,” said the Professional Footballers’ Association, the players’ union.

Harassment and racist comments began to flood the social media accounts of the three players as soon as the game was over. A mural in the city of Manchester depicting Rashford, celebrating his charitable work, was defaced in a way police have called “racially aggravated.”

Gareth Southgate, the coach of the national team, called the harassment “unforgivable.”

“It’s just not what we stand for,” Southgate said in a press conference Monday, praising the play of Rashford, Sancho and Saka. “We heal together as a team now, and we’re there for them, and I know that 99% of the public will be as well, because they will appreciate how well they played.”

In the penalty shootout, England made its first two shots, taken by Harry Kane and Harry Maguire, who are both white.

Then Rashford and Sancho — who had subbed into the game near the end of extra time specifically so they could participate in a shootout — missed, with Rashford’s kick bouncing off the post and Sancho’s saved by Italian goalkeeper Gianluigi Donnarumma.

A pair of saves by England’s goalkeeper, Jordan Pickford, had England clinging to a chance of victory, so long as the 19-year-old Arsenal star Saka could sink the crucial fifth shot.

But Saka’s attempt, too, was saved by Donnarumma, sending the Italians into a frenzied celebration as England’s players crumpled, heads in hands.

“Last night we witnessed the leadership and character we’ve always known and loved in Bukayo. However, this feeling of pride quickly turned to sorrow at the racist comments our young player was subjected to on his social media platforms after the final whistle,” wrote Arsenal, Saka’s Premier League club, in a statement Monday. “Our message to Bukayo is: hold your head high, we are so very proud of you and we cannot wait to welcome you back home to Arsenal soon.”

None of the three players affected have spoken publicly since the game.

Players in England have experienced racism for years

English players have long faced racism, and many have spoken out about the issue in recent years, including Rashford, who earlier this year called the racist abuse he receives from soccer fans “humanity and social media at its worst.”

At this year’s Euro tournament, England’s team took a knee before games in a demonstration against racial inequality, to the jeering of some fans.

“Hate is a strong word. But the racist relying on black English footballers to bring them glory as if they were their servants, then turning on them as soon as they fell short of their dreams, have my deepest contempt,” wrote Musa Okwonga, an English football writer, on Twitter after the game as the harassment began.