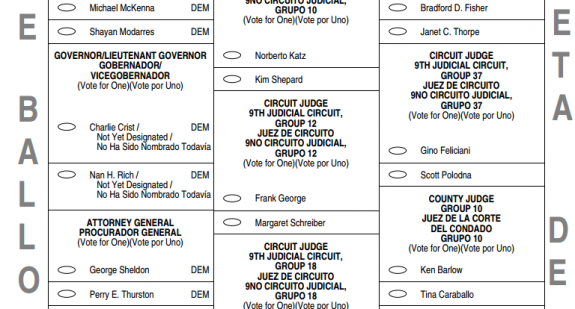 The other statewide Democratic primary will pick a challenger for Republican Attorney General Pam Bondi. She’s better funded than both House Minority Leader Perry Thurston and former secretary of the Florida Department of Children and Families, George Sheldon.

A Democratic race to watch is the District 12 state Senate match-up between incumbent Geraldine Thompson and former Senator Gary Siplin. It’s close, but Thompson has an edge in fundraising and party support.

Florida is a closed primary state, but all voters have a say in nonpartisan judicial and municipal races.

Orange County has two ballot initiatives. One proposes a half-cent surtax for school construction. The other is a moot point. The Legislature has already overruled guaranteed sick time.

Check your voter registration and find your precinct: