Preventing The Spread Of HIV In Parramore, One Condom At A Time 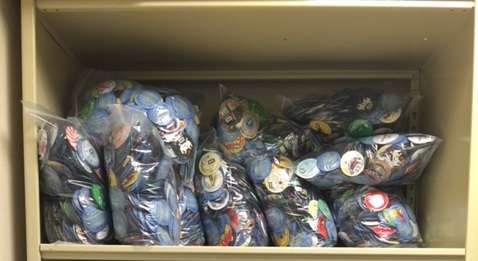 Hope and Help spent an afternoon giving out some 3,000 condoms in the Parramore neighborhood.

Jesse Dixon walks up to a woman by the Coalition for the Homeless and offers her a pack of condoms. She got some from the health department, she says, and is trying to sell them.

“Well let me give you some more, then, you might want to sell them to somebody that can use them,” says Dixon, a health educator with the nonprofit Hope and Help.  “Help save somebody’s life, whether you make a dollar or not.”

Dixon is with a group of six health educators from Hope and Help. They walk the streets of Parramore, armed with backpacks stuffed with Ziploc bags of condoms. They talk safe sex with anyone who will listen.

The day is hot, and threatening a Florida downpour. We start by the Coalition for the Homeless on Terry Avenue in Parramore. A man sitting in an SUV cracks a joke about the number of condoms he’s handed.

“Not that much Viagra in the world, man,” he cackles.

Activists say HIV and AIDS is a problem in the Parramore area. More than three people out of every 100 are infected.

As we walked by the empty lot that will become the new Orlando City Soccer stadium next, Hope and Help peer mentor Steve Addona wonders aloud what that change will bring to Parramore when it becomes an extension of downtown?

“Where are these people gonna go?” Addona asked. “Are they gonna be pushed closer to the Pine Hills area? They’re certainly not gonna disappear.”

One reason HIV is prevalent in Parramore is geographic. Interstate 4 stands as a barrier, strangling the neighborhood off from the rest of Orlando. It makes issues in the neighborhood easier to ignore.

And once HIV is introduced, the virus spreads from partner to partner in what experts call a closed system.

Dixon leads the group deeper into the Parramore neighborhood. Boarded up empty homes dot the area. Residents hang out in clusters outside.

Hope and Help Health Educator Seantele Jarrett spots a middle-aged woman standing in her front yard and hands her a pack of condoms. The woman says her brother just got out of jail and took an HIV test. He’s not positive.

“Tell him he wants to stay that way,” Jarret said.

A woman Jarrett knows walks up and gives her a big hug. Then another man approaches her asking for condoms.

“I just thought about it, I’m going where a gang of freaks at,” he says.

“Oh lord, I better give you three or four packs,” Jarret says. “Give em to the freaks, tell ’em use ’em. And tell them make sure they wear they right size. Don’t put on a magnum if they don’t need it.”

Some residents turn down the condoms. Most residents thanked the group, and many find some humor in the situation. One mother yelled at her son, telling him he doesn’t need a baby.

“Our prevention team loves to work in Parramore because they are so appreciative of our help,” said Lisa Barr, the executive director of Hope and Help. “But there are factors stacked up against them that make them more susceptible to HIV and other infections. So the rates in that area are quite high.”

Barr says factors stacked against Parramore include a high poverty rate and a high crime rate and low education rate. Only about half of adults have a high school diploma or GED.

And then there’s Orange Blossom Trail: High homeless population, sex workers, drug addicts. All big risk factors for HIV and AIDS. Barr says she wants to put Hope and Help smack dab into Parramore. They even picked out a site.

“But there’s a city ordinance that prohibits social service organizations from being in that area.”

“We believe it’s because they don’t want the homeless to gather,” Barr said. “But that’s not the service we provide.”

Back on the prevention outreach walk, Jesse Dixon leads us toward a spot where the homeless congregate under a bridge. The shelter make you leave early in the morning, and many businesses don’t want the homeless to hang out front.

“So they use this to stay cool and for shelter,” Dixon said.

The overpass is dark and loud, but there are benches built in. The team splits into two groups, one on each side of the road. A man in nothing but a pair of pants wheels by on a motorized cart. A young woman sits smoking in a La-Z-Boy recliner.

One man in a fishnet mid-rift shirt shows one of the health workers a book of his drawings. He asks if they know anyone who could use the art.

Most everyone under the bridge takes a pack of condoms. The group is running low and they only give out a few to each. They leave the bridge and head back for the day. In total, nearly 3,000 condoms were handed out in one afternoon.

Parramore has a reputation for its crime rate. But in the year and a half the group has been doing this, they’ve never been threatened.

But there has been the occasional scare: As the group heads back for the day, a pitbull rushes the fence, barking.

“What’s up, what you gonna do, you gonna bite someone?” said Brenda Reed, a health educator with Hope and Help. The dog seems to bark in response. “Whatever,” she said, walking away.