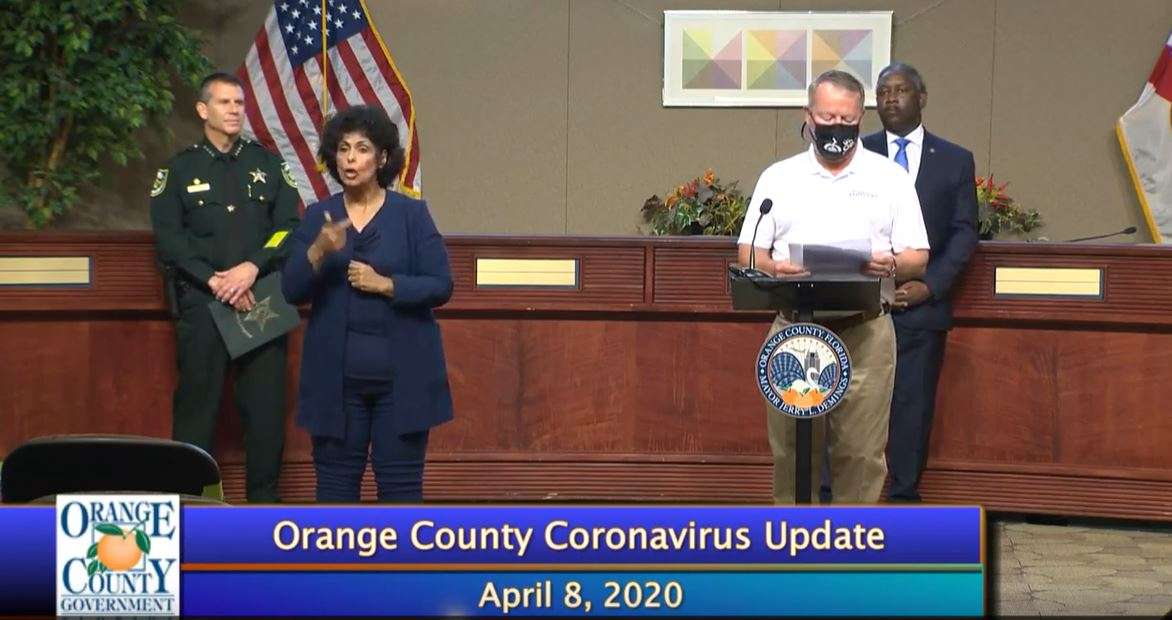 More than 2,000 hospitalized in Florida with coronavirus

Florida’s coronavirus cases continue to tick up with 15,698 testing positive according to the latest numbers from the Florida Department of Health.

Orange County has 824 cases, with 94 hospitalizations and 11 deaths.

Hover over the map for data from other counties.

Convention Center to be designated a federal medical facility, should the need arise

The Orange County Convention Center will be designated a federal medical facility, should the need for hospital resources surge.

Orange County Mayor Jerry Demings made the announcement at a press conference this afternoon.

“I participated on a joint briefing call with U.S. Senator Rick Scott to help advance this request,” said Demings.

“Again, part of that is about planning for the worst. But hoping for the best.”

The Convention Center continues to serve as a drive-through testing site for the region, testing more than 8-thousand residents so far.

Demings said the county has placed large orders of PPEs from the state, but is receiving small shipments of replenishment.

“When you talk about 75 plus million visitors coming here to this area with the theme parks, closing, I think that was a pivotal moment, and not just impeding the spread of the virus here, but across America. And perhaps across the globe.”

Demings praised the company for “putting people over profits.”

County health leaders say the rate of positive test results is dipping slightly, and is now below ten percent. As of this morning’s update from the Florida department of health, the county had tested 8,558 people, with 803 testing positive.

Statewide the 10.7% of people tested have returned a positive result for coronavirus.

The need for food assistance has spiked after the coronavirus pandemic shuttered businesses and left many Orange County residents out of work.

“The food banks online searches for food have climbed from an average of 35 per day in early March to nearly 2000 as of Friday, April, 3 alone,” said Demings.

The organization says monetary donations are best. Second Harvest is hosting an online food drive for donations at feedhopenow.org

Agriculture Commissioner Nikki Fried wants to get more eggs into grocery stores ahead of Easter weekend.

She has issued an emergency order waiving certain packaging and labeling requirements.

Under the order, packages of eggs will not have to have certain information like date of pack, grade and size, although retailers will provide in-store statements with the information typically required.

The Florida Department of Agriculture and Consumer Services says this will allow eggs to be moved more quickly from producers to retailers.

The department says the order is part of an effort to ensure a resilient food supply chain during the COVID-19 pandemic.

The order follows an announcement from the U.S. Food and Drug Administration that it will provide temporary flexibility on certain packaging and labeling requirements for shell eggs sold in grocery stores.

Brevard County is loosening the criteria to get a COVID-19 test at its Florida Department of Health-run testing sites.

Now, any person with a fever of 100 point 4, a cough and shortness of breath can get a test. Residents wanting a test must make an appointment first by calling 321-454-7141.

Omni Healthcare is also offering drive through testing for any first responder, healthcare worker and Publix or Winn Dixie employee — regardless of symptoms.

Florida added nearly 1,000 coronavirus cases overnight, bringing the case count to 15,546. Hospitalizations have climbed to 1,956 and 309 people have died from COVID-19.

South Florida is the epicenter of the pandemic in the state, with more than 5,000 cases in Miami-Dade alone.

Orange County has the most cases of any county in Central Florida, with 803 cases, 96 hospitalizations and 10 deaths.

In Sumter County, home of The Villages retirement community, 90 people have tested positive for coronavirus, 27 people have been hospitalized and seven have died. Lake County has 136 cases,  31 hospitalizations and two deaths.

Hover over the map to see case numbers in other counties.

Central Florida LGBTQ groups say they want the federal government to remove restrictions on gay and bisexual men who want to give blood.

Men who have sex with men now only have to wait three instead of twelve months since their last sexual encounter before they can give blood. The FDA made the change last week because of a nationwide blood shortage.

Hope and Help’s Adam Troy says he’d like to get rid of the wait time completely.

“I mean, I think the steps that we need to take is just focus on individual risk and stop making blanket statements that focus on a particular segment of the population,” said Troy.

The easing of restrictions also applies to women who have sex with gay and bisexual men and people who have gotten tattoos and piercings.

ORLANDO, Fla. (AP) — Disney and a union representing musicians that perform at its theme parks have reached an agreement that extends the company’s furloughs to union workers while maintaining their health benefits.

A joint statement from the union and the company says the agreement was reached Tuesday night. It’s not immediately known how many union workers will be affected by the furloughs, which will be effective April 19.

Disney shut down its Florida and California theme parks last month as the coronavirus pandemic took hold in the United States. Workers have been paid but Disney recently announced furloughs for some non-union staff.

And Florida’s congressional Democrats called Tuesday on Gov. Ron DeSantis to extend unemployment benefits beyond the current 12-week limit and raise the $275 a week cap, which is among the lowest in the country.

It remained unclear Tuesday how quickly Florida can begin issuing checks to hundreds of thousands of jobless who are left without income by stay-at-home orders and the virus-induced downturn.

In a media briefing Tuesday he said they will be studying how many people have the virus but don’t show symptoms.

“So we’ll see how this community surveillance in the Jacksonville area will work but I think that that’s important because it really helps inform us in terms of what additional steps we can take.”

DeSantis said after testing and studying people in the Villages, no one that had the virus was asymptomatic.

FORT LAUDERDALE, Fla. (AP) — The Florida sheriff’s office ripped apart by the 2018 Parkland high school massacre is now facing an angry, public fracture sparked by the coronavirus death of one of its deputies.

Its president published a column blasting Tony in the local newspaper four days after the death of Deputy Shannon  Bennett. Jeff Bell accused Tony of not providing enough protective equipment.

Tony fired back, saying Bell is politicizing Bennett’s death and called his actions “despicable.” Broward is one of Florida’s hot spots for COVID-19, with 2,200 confirmed cases and 53 deaths.

Click here to read more of coverage of coronavirus in Florida.