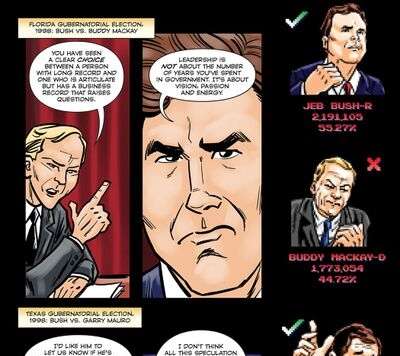 Writer Michael Frizell teamed up with a comic book artist to capture tidbits about what he calls the man behind the Bush persona.

“My mandate as a writer was to get to the human side of these candidates,” he said. “You kind of play to their fan base a little bit, sure. But I don’t want to shy away from too much controversy, so I kind of put that in there, too.”

Frizell offers a snapshot into Bush’s family life and hints at the responsibility of being the son and brother of former presidents.

“I’m not interested in the super hero stuff,” he added. “What I want is to write something relevant that makes sense, and people are genuinely interested in what’s happening nowadays.”

Since 2008, the publisher has released more than 60 comic book bios on popular icons.