President Trump To Face Friendly Crowd At March For Life 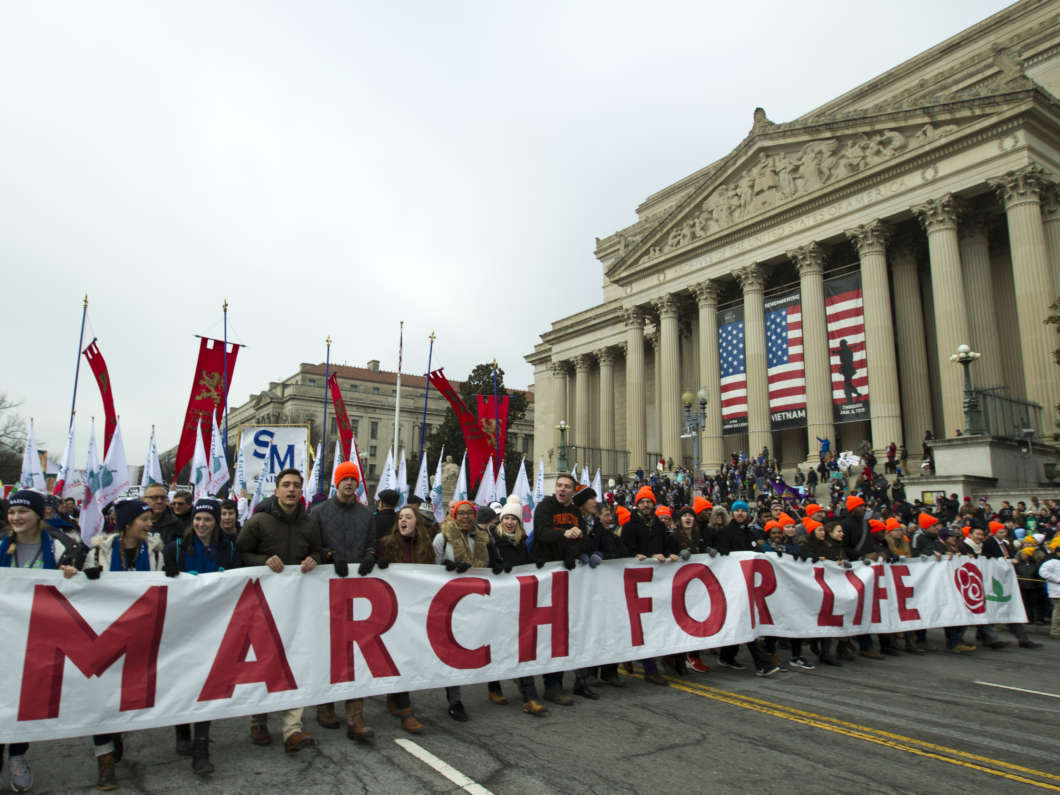 Anti-abortion activists march toward the U.S. Supreme Court during the 2019 March for Life in Washington, D.C. This year, President Trump is expected to speak at the rally.
Image credit: Jose Luis Magana

When thousands of anti-abortion rights activists march in Washington, D.C., on Friday, President Trump will be there. It’s the first time a sitting president will address the March for Life, an annual event organized decades ago in response to the 1973 Roe v. Wade decision that legalized abortion nationwide.

Trump will face a friendly audience at a key moment — with his impeachment trial underway, and just months to go before the 2020 election. The president has leaned in to his connection to religious and social conservatives, frequently praising “the evangelicals” who comprise a key portion of his base, and courting anti-abortion rights groups like the Susan B. Anthony List.

That group’s president, Marjorie Dannenfelser, called Trump’s appearance at the march “a moment of celebration for the pro-life movement.” In an interview with NPR, she it’s a reminder of how far Trump has come in the minds of some conservatives who were initially skeptical because of his past support for abortion rights.

“Everyone doubted where he was on the abortion issue. He stated what he believed. There were doubts all over — I mean, I was one of them,” Dannenfelser said. “…So he’s actually become the person that he says he is.”

Dannenfelser said she is pleased with Trump’s appointment of conservative federal judges — most notably to the Supreme Court. Just this week the Trump administration signed off on federal funding for a family planning program in Texas that excludes groups like Planned Parenthood that provide abortion services.

On Wednesday, Trump retweeted a post by the March for Life, adding, “See you on Friday…big crowd!”

Trump’s appearance isn’t entirely unprecedented: two years ago, he spoke live via video feed from the White House Rose Garden, telling that marchers, “you love every child, born and unborn, because you believe that every life is sacred, that every child is a precious gift from God.”

Other Republican presidents — Ronald Reagan and the Bushes — have addressed the crowd remotely, via phone call or prepared statement. Some observers have speculated that such a move allowed those presidents to court anti-abortion voters without subjecting themselves to a photo-op in front of the crowd, out of fear of turning off more moderate voters.

Reproductive rights groups are using the moment to remind their supporters of Trump’s opposition to abortion rights. NARAL Pro-Choice America President Ilyse Hogue issued a statement calling Trump’s decision to appear at the March for Life an “act of desperation.”

In an interview with NPR, Planned Parenthood’s acting president and CEO, Alexis McGill Johnson, said Trump’s appearance at the event is “no surprise” given his policy record.

“This is just confirmation that we have a sitting president of the United States who is determined to do whatever he can to end people’s ability to access abortion,” McGill Johnson said.

Advocates on both sides of the abortion debate see much at stake in the 2020 election. After Trump’s address, activists at the rally will march from the National Mall to the U.S. Supreme Court — where just weeks from now, the court is set to take up its first major abortion case since Trump’s two conservatives nominees, Justices Neil Gorsuch and Brett Kavanaugh, joined the bench.

Those two justices alone have moved the court to the right, setting up the possibility that Roe could be overturned or substantially eroded. And whoever is elected in November may have the opportunity to name at least one more justice to the court.