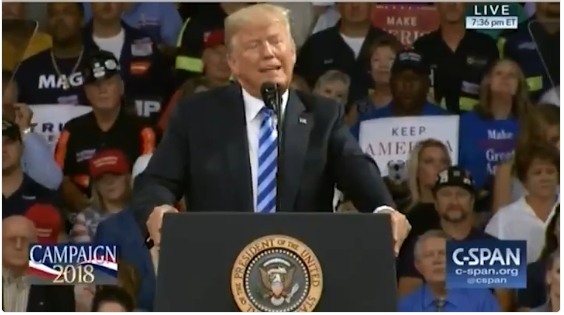 Republican Gubernatorial candidate Ron DeSantis is embracing his endorsement by President Donald Trump who re-upped his endorsement for the Congressman at a rally Tuesday in West Virginia.\

DeSantis tweeted a video of the President’s remarks, saying he is proud to have his full and total endorsement.
The President’s endorsement earlier in the race gave DeSantis a jump ahead of primary challenger Agriculture Commissioner Adam.

“I gave him a nice tweet,” Trump said at the rally. “Bing bing, and he went from like three to twenty something.”

Now, DeSantis and Putnam are neck and neck in a recent poll from Florida Atlantic University. DeSantis holds about a one point lead, 32 to 31 percent, with 22 percent undecided. The margin of error for likely voters in the Republican primary is +/- 6.5 percentage points.

The primary election is Tuesday.