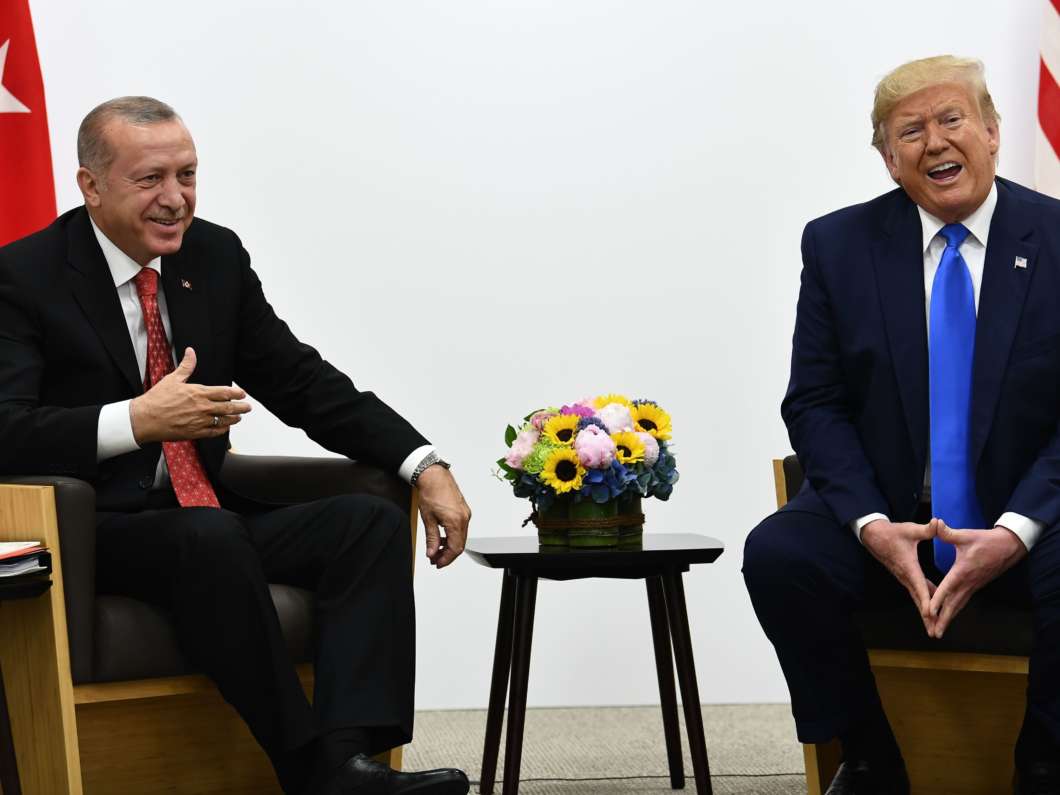 President Trump is welcoming Turkish President Recep Tayyip Erdogan to the White House on Wednesday for talks about Syria and also Turkey's decision to buy a Russian defense system. Above, they meet in June, the last time the two leaders met in person.
Image credit: Brendan Smialowski

President Trump will meet with Turkish President Recep Tayyip Erdogan on Wednesday for the first time since Turkey undertook a military offensive in northern Syria that angered U.S. lawmakers on both sides of the aisle.

Trump opened the door to the Turkish incursion when he abruptly announced he would be pulling U.S. troops from that part of Syria after a phone call with Erdogan in early October.

Lawmakers overwhelmingly condemned these moves by Trump and Erdogan. Some have argued that Trump should not have given Erdogan the honor of a White House visit in light of Turkey’s actions in Syria.

But although Trump has clashed with Erdogan at points, he has mostly embraced a partnership with the Turkish leader and pressed ahead with plans to welcome him to the Oval Office for bilateral talks.

“The president is committed to direct engagement in diplomacy, where it is most critical,” a senior Trump administration official said regarding the visit. “Full and frank engagement is essential to addressing the challenges facing this relationship.”

Trump has dismissed the notion that the U.S. has an obligation to permanently protect Kurdish forces, which have been allied with the U.S. against the Islamic State. Turkey considers these Kurdish fighters to be terrorists and says the U.S. should end its partnership with them.

While a cease-fire agreement was reached a few weeks ago, Heather Conley, of the Center for Strategic and International Studies, said the full implementation of the deal remains uncertain.

“This is going to be very difficult for the foreseeable future,” said Conley, who is director of CSIS’ Europe Program. “They may declare success about this cease-fire and the safety zone, but quite frankly, I think there are more questions being raised, than success.”

Trump and Erdogan will likely discuss how to ensure that the cease-fire holds and also the fate of the Islamic State fighters detained in Syria. Kurdish forces had been guarding these Islamic State militants.

The U.S. said that Turkey would be responsible for recapturing any fighters who escaped during the incursion into Syria. But Erdogan has threatened to release the militants into Europe.

Outside of Syria, the U.S. and Turkey have clashed on Turkey’s decision to buy Russia’s S-400 missile defense system. In response, the U.S. has barred Turkey from buying U.S.-made F-35 fighter jets.

National Security Adviser Robert O’Brien told CBS’ Face the Nation on Sunday that Trump plans to tell Erdogan that, as a NATO ally, Turkey should not be buying Russian military equipment.

So far, Turkey has refused to give up the defense system.

Erdogan’s last visit to Washington, D.C., in 2017, ended in violence when his security detail attacked protesters outside the Turkish ambassador’s residence. Seven of Erdogan’s bodyguards faced criminal charges in the incident, which injured nine people, but those charges were later dropped.

The administration official acknowledged that it will be a tough lift to find common ground between the U.S. and Turkey on some of the critical issues.

“Due to a whole variety of factors over the past five or so years, this relationship has slipped to … where there are a number of issues where we seem to be at loggerheads,” the official said.